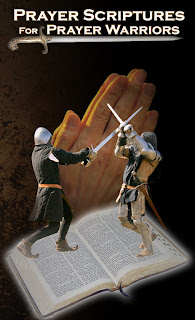 One of the terms I have always been uneasy about is the term "prayer warrior."  It is a common term and you find it used by LCMSers as well as those all over the evangelical map.  I understand the term and its origins.  I think the term itself is less obnoxious than the ideas associated with it.  But I wonder if it is high time to drop such usage because of the flawed ideas that have accompanied and been the fruit of this term.

A prayer warrior refers to anyone who prayers for others but it is generally used in the context of those who see themselves in some form of spiritual warfare against satanic and demonic forces as well as for the sake of the one in whose name the petitions are sent forth to heaven. Prayer warriors ray for individuals, for causes, for needs of nations or regions, etc...  The image that always comes to my mind is Pat Roberson attempting to pray away a hurricane that threatened CBN.

The thing that bothers me most is that we have institutionalized the idea that praying for someone or something necessarily means praying against others and their cause.  This may be true but the adversarial relationship does not quite fit the nature of prayer and the idea of intercession.  The nature of prayer requires a graciousness that is too often lacking in our prayers.  When we pray primarily out of fear or resentment or bitterness against those who disagree with us or whom we believe might hurt us (or have hurt us), we miss what it means to pray.  When we pray for our enemies we cannot be content to pray that they suffer but learn to pray that their hearts may be converted and that God may intervene to transform them from enemies into brothers and sisters in Christ.  When we pray for the erring it is not enough to pray that they are confounded by their error but that the Lord would show them their error and bring them to a knowledge of the truth.  When we pray for those who suffer and against those who cause this suffering, we cannot afford to turn prayer into a choice between opposing sides but to pray for God's will to be done for the sake of all sides to whatever issue or conflict there is.

Unfortunately, our listening to the evangelicals and Protestants has taught us more about prayer than our rich treasure of the great collects of the Church.  So we end up sounding more like them than we like, well, us.  Consider here the great litanies and the bidding prayers of old.  Pray them to learn from them and you find in them a humble spirit and a gracious character that reflects God's gracious and merciful nature.  They are not only words to pray but prayers that teach us to pray.

It is the mark of Christian prayer that we exhibit the same merciful and gracious nature toward our enemies and those who oppress us as God has shown to us -- who were His enemies and still He loved us.  We do not need to import into prayer the same militant attitudes that divide us and set us at odds in the political sphere.  God is not some neutral party who must be swayed to our point of view like the independent voter.  We pray to address the Lord with all that is in our heart and yet with confidence "Thy will be done..."  We believe in this will.  We know it to be good and gracious through Jesus Christ.  We live not in fear of God's will nor of those opposed to it for His will shall prevail.  Just as death could not hold Jesus, neither can death and the enemies of Christ's life steal from His people what Christ in His mercy has bestowed upon them (us).

Many years ago a person with whom I had some disagreements was elected to a congregational office that required us to work together.  I was fearful of what this might mean for us both.  An elderly Pastor counseled me to pray for him but not to pray that he become easier to deal with or come around to my point of view but to pray for him simply by naming him as a child of God before His Lord and that God's will be done in him and through him.  I thought it was foolishness and was thinking I needed to pray that some travesty befall this guy so that he could not serve where he had been elected.  In the end, I reluctantly prayed as I had been taught.  It was pure freedom.  It was gift and blessing beyond comprehension.  Prayer became one of the means by which I learned that he was not my enemy and that I was not his, that we were both those whom Christ loved even to death.  I cannot say the guy changed but the fruit of the prayer was that I changed and we found the common ground to work together.  Many years later he became a friend in a way that I had never imagined.  I thought I knew prayer.  This older veteran of the cross taught me that prayer is not a weapon.  It is a gift.  I cannot judge the individual prayer warriors but I hope that they realize what I learned by this experience.  Prayer is not a weapon.  It is a gift.
Posted by Pastor Peters at 6:00 AM

I, too, Fr. Peters, share your aversion to the phrase "prayer warriors." When a woman used that term during one of our church meetings, I could hear the collective palm hitting the face. Prayer is not warfare. Spiritual warfare may include prayer but they are not one and the same.

The problem with warring in prayer is it puts us in the unfortunate position of power. As with so much of the rest of evangelicalism, God needs our cooperation or strength in order to accomplish His will.

Our prayer is saying God's Words after Him (I think that is a quasi quote of Norman Nagel).

A hard lesson for our flesh to learn.

Perhaps it is instructive to look at prayer in the context of EPHESIANS 6:10-20 (and specifically 6:17-18), in which "praying" (v. 18) is a participle, directly connecting that term to v. 17 (the armor of God). Linguistically speaking, it is therefore inconsistent to deny the biblical connection between warfare and prayer, at least in that passage. Of course, that reference does not support or endorse much of what is purported by some today regarding this theme--but it does in fact provide scriptural grounds for the so-called “prayer warrior.” Hope that helps.