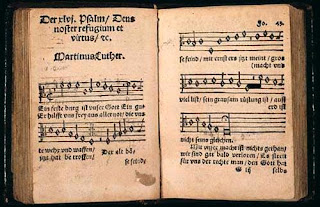 One of the official publications of one of our LCMS Districts reports that a retired pastor has just been given an honorary doctorate from one of the Concordia universities owing to the fact that under his leadership, his congregation's music "transitioned from the emphasis on traditional music and added a more Gospel oriented genre."

It is bad enough when this happens, it is worse when it is not only official sanctioned but held up as exemplary service.  Perhaps we ought to have a whole new category of honors in the LCMS... one for those who courageously have jettisoned Lutheran faith in confession and in practice in missions, parishes, districts, etc...  Surely we would have more people to complete for this honor than if we counted up those who restored a lip service Lutheranism to its confessional, liturgical, and catechetical identity.  But just maybe that is exactly what we need... an honor bestowed upon those pastors and parish musicians who have tirelessly worked to rekindle an awareness and affection for the Lutheran Divine Service and the richest tradition of hymnody, choral, and liturgical music that supports the full expression of the Divine Service.

Anybody in with me?
Posted by Pastor Peters at 6:00 AM

Honorary doctorates are generally pretty meaningless, and this one is doubly so. Just be sure everyone is aware how it was "earned," and it will stink to high heaven!

One of the official publications of one of our LCMS Districts reports that a retired pastor has just been given an honorary doctorate from one of the Concordia universities owing to the fact that under his leadership, his congregation's music "transitioned from the emphasis on traditional music and added a more Gospel oriented genre."

What District publication? What Concordia? What retired pastor? What kind of honorary doctorate?

Reap what you sow. Things like this are your own damned fault.

Why should a Lutheran denomination try to look and sound like a Baptist church. That is soooo 1999. Disaffected Evangelicals are not seeking another church home that is a bad imitation of the church they are trying to leave. They want deep theology. Have the LCMS districts bothered to ask converts from Evangelicalism to the LCMS to learn what Evangelicals really want? I would wager they did not.

If the worship and study materials are the same, then why leave that Baptist or non-denominational seeker church to join the LCMS? Why is this issue so hard for district presidents to understand? I am starting to think that there are pastors within the LCMS who are deliberately trying to ruin the Church.

Most people at my church participate in singing during the traditional service. Almost no one sings along to the pop songs during the contemporary service. Ask why.

"Reap what you sow. Things like this are your own damned fault."

Whoever you are, and whatever Church Body you belong to, please let us know! You might get a whole lot of converts to your side!

Yes, Baptists looking for REAL teaching, focus on Christ and the Cross, focus on the Word and not our own navels will be disappointed. A Denomination (LCMS) that does what is claimed to have happened has problems. My husband and I are a couple of those Baptists who did find the LCMS an imperfect "what they were looking for."

However, individual churches aren't all like that. Sure hope this thing isn't prophetic; I'd hate to see Lutherans start church-hopping like the Baptists. The price of gas would be a killer on them....

Just an addition. It's impossible to have a perfect LCMS. We have sinful members, elders, councils, pastors, district presidents. We even have a sinful Synod President. If you've ever listened to President Harrison speak, I think you'll hear those words from his own mouth.