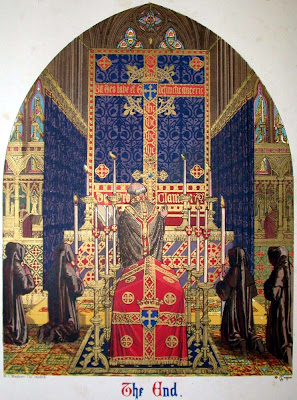 Some of the linguistic changes of the liturgical movement have endeared themselves but some remain uncomfortable despite decades of use.  One of the modernizations I still struggle with is the close of the collects:  ...ever one God, world without end... or the end of the Gloria Patri:  ...is now and ever shall be, world without end.  Amen..   For whatever reason, I still prefer "world without end" to "now and forever."  Perhaps the Orthodox expression is better, "unto the ages of ages," but it is not without its problems, too.

Forever is a difficult word today.  It seems clear enough yet we have trouble unpacking the idea of forever in a world so captive to the moment.  Nothing is forever today; even the things we say are forever.  Almost all our forever decisions and commitments end up being rather temporary and it does not seem to bother us much anymore.  Our parish received new members last month and they solemnly promised to suffer all rather than fall away from this faith and this church... forever.  I remember a circuit gathering many years ago when we were discussing something and the now sainted Jim von Schenk (yes son of that von Schenk) offered an answer from the hymn:  "Praise the Almighty, my soul, adore Him!  Yea, I will laud Him until death....  Forever to us becomes until death.  Or perhaps until something major makes us change our minds.

World without end seems to move the whole thing from us to something outside ourselves.  In more noble terms, it is as if we are tying the statement to some point outside of a frame of reference defined by time at all.  I wish we could go back and reclaim this ending for regular use.  It speaks well and part of the whole function of liturgical language is to speak well.  That explains the great affection with which we continue to hold the King James Version.  It may not be as accurate as some of the more modern versions but it certainly speaks well, especially on a cold day while a casket is being lowered into the ground and a people have come to hear "The Lord is my shepherd...."

The Greek "eis tous aionas ton aionon" and the Latin "In saecula saeculorum" or "per omnia saecula saeculorum", variously rendered "ages of ages" or "world without end" or "now and forever", perhaps began as a Semitic idiom (the Hebrew le'olam va'ed – literally, "from this world to the next" or, better, "le'olame 'olamim" ) and then ended up adapted into Koine Greek. Ephesians 3:21 is certainly relevant to this discussion as are 1Kings 1:31, Isaiah51.9, and Daniel 9.24.  My study tells me also that the original, now archaic, meaning of "world" is lifetime, and it fits well enough with "saeculum". The "without end" part seems to be a rendering into idiomatic English of the plural genitive (e.g. King of Kings, Lord of Lords, ages of ages, etc.) so often used to make a superlative in biblical Latin, which probably reflects the similar Hebrew idiom.


I know that "world without end" is an obsolete expression from the King James era but I still prefer it to "now and forever".   Liturgical language is meant to be heard.  Unlike words we read or write, liturgical language has a voice, a vocal presence.  As such, it does not change as quickly as the vocabulary of the newspaper or everyday conversation.  It does not race to keep up with culture and the peculiarities of linguistic change.  It is as its best when it is intentionally behind the times, a few generations removed from trend or fad so that it may speak in a timeless sense, not at all captive to the moment.

World without end...  Whether we admit it or not, we do enjoy the richness of liturgical English.  Think of the Church of England and those royal occasions when a world of people sits to watch on TV and listen to the sound of that familiar accent speaking in more ancient form words that bring the weight of eternity to a given moment.  It sounds better.  It fits the tone and tenor of an occasion filled with pageantry and costume, horse drawn carriages, and regal music.  I do not mean to imply that worship is the same thing or even similar.  It is not a show and not meant to entertain.  But in like manner, worship draws more from the past than it does the present moment, bringing to bear the Church of the ages whose history is the living faith of the dead, as well as addressing the people here present.  Sometimes language has the power to assist this in subtle yet profound ways.

Thank you so much for these comments. When in the UK I like to attend services in the Anglican church and on these occasions I never fail to be struck by World without end. Your comments describe what I feel in such an appropriate and accurate way. I totally agree with you that "World without end seems to move the whole thing from us to something outside ourselves".