Living in a religious state. . .

Read here about how religious is the population of the state in which you live.  Just a little north of Mississippi, we here in Tennessee are only slightly behind the folks to our south in religiosity.  I am not sure what all this ranking means.  You will have to interpret it for yourself.  I have no wisdom here.  Only the suggestion that such information may be helpful for a trivia game or to impress someone with one more rather meaningless statistic. 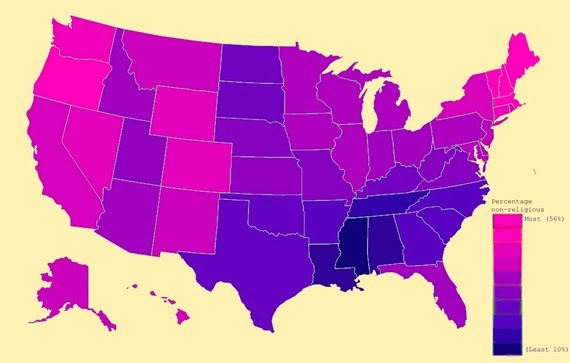 This map is, I believe, from The Atlantic.  It was emailed to me by a helpful reader of this blog.

The states are pretty predictable.  I think we all knew the coasts were less religious than the heartland and that the south was the most religious of all.  How this affects a host of other things is another thing altogether.  In Tennessee it does NOT mean that divorce rates are low but it does mean that you are more likely to find public prayer and public displays of the Ten Commandments.  It does NOT mean that the religious have a social conscience that means poverty is low, schools are safe, and teenage pregnancy is low.  It does mean that some churches have programs to support the hungry and homeless but not enough, that parents are just as suspicious of the aims of many educational programs and tax support for schools is lower here, and it does mean that though condoms are readily available, they have not prevented either disease or pregnancy among teens.  All it really means is that more folks here are in church on a given Sunday morning than in other places.  To be sure, it still means that half the folks where I live are not in church on a Sunday morning so there is room for churches to grow, to be sure.  The rest of this will be left to others to explain...
Posted by Pastor Peters at 6:00 AM