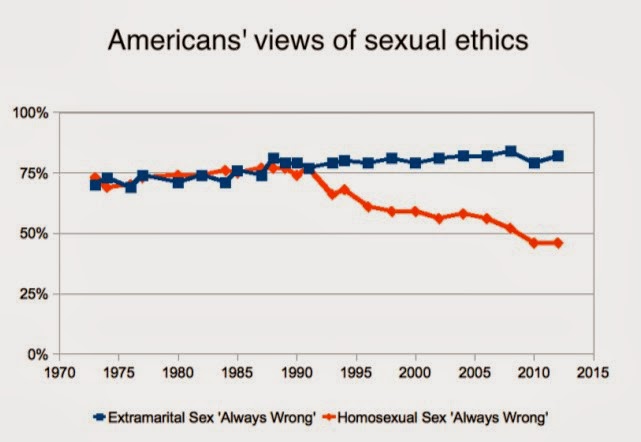 About 1990 the way Americans view homosexuality began to change.  Prior to this point, it was pretty intertwined with their view of extra-marital sex -- largely negative with 75% or more in agreement that it is always wrong.  From 1990 on the view of extramarital sex remained fairly consistent but the numbers of folks believing homosexual sex was always wrong dropped significantly until about 2007-2008 it dropped below 50%.

Such is the view of the Gallup organization as it solicits and reports the views of Americans on religion, morality, and a host of other topics.  What do we make of this?  You can draw your own conclusions.  For my part, the media has certainly had a hand in the changing perceptions of homosexual sex.  The change in the view began about the same time that gays became featured characters on well written comedies such as Will and Grace, among others.  While extramarital sex has been the stuff of soap operas and themes of countless movies and plots from countless TV shows, it was never able to be portrayed in the same positive light that the media has had success with for gays and lesbians.  The effect of the media campaign to mainstream gays and lesbians has not been without effect.  That said, it is not the media whose mind has changed.  The people in ordinary living rooms across America not only laughed at the jokes but began consciously to change their views on homosexual sex.  The media could not impose on us what we as American were not willing to be complicit in.  We changed.  Funny thing is that extramarital sex is much more majority than the small percentage of those who self-identify as gays or lesbians.  So even though I credit the media for the packaging, the Americans in their living rooms and around their kitchen tables had to buy the package.  That is clearly part of what has happened.
Posted by Pastor Peters at 6:00 AM