Thoughts on reading the newspaper. . . 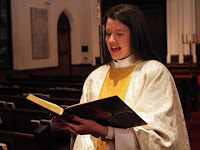 There is little of most newspapers devoted to religion or religious news -- unless that somehow bridges the gap between hard news and religion.  So most of the time we get mere tidbits -- even in local newspapers about local churches.  A few Sundays ago I opened my own daily newspaper and found a feature story with pictures about the new rector for the local Episcopal Church.  You will recall from previous posts that the Episcopalians are going through hard times -- both locally and throughout the modern world (vitality being more or less confined to the less developed regions of the globe).  They suffered through a tempestuous tenure of Katherine Jefferts Schori as Presiding Bishop -- a term more noted for the expenditure of millions in litigation and time spent in court than anything else.  You may have caught the several hour extravaganza of the installation of her successor (Michael Bruce Curry) complete with Native American drummers and a host of other things some might find surprising.

Back to my story.  I opened the newspaper and found a feature interview with the new rector of the local Episcopal congregation and found her interview both amusing and confusing.  On one hand she admits to being a nerd who loves Beyonce and attends the Dragon-Con in Atlanta every year.  On the other hand she describes her role as more life coach than priest and cheerleader for Jesus and the social causes that some Episcopalians have substituted for the Gospel.

Then she was asked: Is this an exciting time for the Episcopal Church?

Holland: This is a very exciting time for the church. It has a lot to offer; our church has this ancient worship style with very deep roots. This is Christian tradition that began with Paul. So, we have this very beautiful traditional worship, and yet the church is very open and constantly evolving. We ordain women; we have married priests. The national church has started same-sex blessings and same-sex marriages. We are kind of an anomaly, ancient worship and open ideals.

The things that Jesus taught us about who he considered a blessed person, who is a blessing to us, who is to be loved, and who we are supposed to be loving, is pretty clear. He meant for us to love everybody, He was very clear about that. We are supposed to love our neighbors as ourselves. In the Episcopal tradition, in our baptismal vows, we vow to strive for justice and peace and to respect the dignity of every human being. We take that vow very seriously.

Hmmm.  Read that first paragraph again.  This is an exciting time for the Episcopal Church?  That is not what most Episcopalians would say.  The Anglican communion is on the verge of collapse with deep divisions on the core of what is believed, taught, and confessed.  The old saying is certainly true:  may you live in interesting times but who would call the implosion of a once large and thriving communion to be interesting.

Then there is that confusing business of Christian tradition that began with Paul.  Or did it begin with Jesus?  Or is she talking about the liturgy beginning with Paul?  Or does she mean that the wholesale rejection of orthodox Christian doctrine that goes on under the guise of evolving church to be consistent with Paul's call to remain stand firm and hold to the traditions that you were taught by ... delivered by the apostles, more than what we find contained in the Holy Scriptures. ... form of doctrine delivered to them, and the faith once delivered to the saints... (2 Thess. 2:15)?

Where does Scripture or the catholic tradition ever describe the church or faith as evolving?  Where is openness to new doctrines, teaching, and social justice positions heralded as a good thing for the Church?  But she did get it right -- we are an anomaly -- ancient worship and open ideas...  But that sort of negates the ancient worship since it ends up being lip service to ideas long ago rejected.

The second paragraph puts the whole Jesus thing into the context of behavior, social advocacy, and social justice.  But it is all Law and no Gospel.  Jesus is the moral model for us to aspire to -- never mind that His actual teachings conflict with the social positions taken by most liberal Episcopalians.  Sometimes you know the Gospel must conflict with the clear word of Scripture and you know which side we are supposed to come down!

Finally there is the suggestion that the Episcopal tradition has the core of its baptismal vows the promise to strive for justice and peace and to respect the dignity of every human being.  Not being immediately familiar with the Episcopal rites, I took a gander at the baptismal rite in the current Book of Common Prayer.  The beginning section of the vows or promises sounds rather ordinary and orthodox.

Then the Celebrant asks the following questions of the candidates who can speak for themselves, and of the parents and godparents who speak on behalf of the infants and younger children

Then you get there.  Sure enough, the Episcopalian baptismal rite seems rather ordinary and routine until you follow up this section with a few more questions and then it does appear that the purpose of the rite is not only to impart the new identity and new life in Christ that Scripture promises but also:

Anyway, my point is that the Episcopal Church has become a church that is not sure who it is.  By the appearance of its worship on Sunday morning it tries to claim catholicity but it forsakes that catholicity upon the altar of relevance, contemporary social justice positions, and an idea of gospel that transcends and even conflicts with Scripture itself.  All of which goes back to the first part of the interview.  Is this an exciting time for the Episcopal Church?  Hmmmm.... not the excitement I would desire but for those relieved of any duty to the Word of God, it must be fun indeed!

You may think that the Episcopal Church USA is uncertain as to its identity, and it may be, but I know exactly who they are. They are out and out pagans, given to doing whatever the devil puts into their hearts.

"Anyway, my point is that the Episcopal Church has become a church that is not sure who it is."

A more obvious point from the article is that the Episcopalian "Church" is not really a CHURCH, but rather an apostate religious organization, and no more Christian than the XXXA or the Mormon "Church" or the Unitarian "Church."

Episcopalian for 30+ years, reared four children at Trinity, under the care of Father Robert Wood. When the American Episcopal Church allowed Homosexual leadership, failure to uphold Christian teachings, denouncing of the Bible, female Priest; after much prayer/tears, I had to leave. It is not just me but thousands of us are left without a Church home. The Episcopal Church has abandoned us for the world, embracing secular lifestyles along with not teaching from the Bible. Please pray for all of us.

@anonymous: why not the LCMS?

The Episcopalian clergy seem to always be blind to the reality of the times especially when it comes to the state of their church and its open hemorrhaging of their faithful.