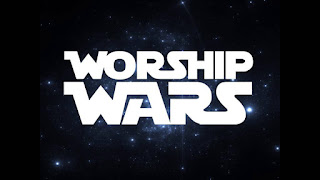 We are so accustomed to framing the divergent worship styles of LCMS congregations in modern terms that we forget the historical roots of such liturgical chaos.  Joseph Herl (see his monograph on Worship Wars in Early Lutheranism) tells us of the very beginnings of Lutheran divergence on Sunday morning but another area to be mined is the transitional time from German into English.

The liturgical chaos of the American Lutheran situation was always more true of English than German language services but it was still true for the German idiom.  When the Synod came into being, the Saxon Agenda and Walther's hymnal brought much uniformity -- at least to the Missouri brand of Lutheranism.  However, when the Synod began its shift into the English language, the division that resulted was not merely linguistic.  German speaking parishes generally retained their uniformity using Walther's hymnal (with its overwhelmingly German hymn content) and the German agenda.  44% of the LCMS worshiped predominantly or exclusively in English with only 23% worshiping predominantly or exclusively in English in 1922.  Within fifteen years those German speaking parishes represented only 12% of the LCMS congregations.  This sudden shift to English left parishes with a choice of hymnals and editions of those hymnals and no where was the diversity more than in the hymnal content (1912 Evangelical Lutheran Hymn-Book and 1917 Liturgy and Agenda).

While there were certainly liturgical differences, the parishes adhered to the liturgical rites with a higher degree of loyalty than in the area of hymnody. That same year, 1922, lists of hymns that serving pastors through LCMS men preparing for the ministry should know or memorize was almost exclusively made up of generic Protestant hymns and the foothold of German hymnody was already minimal.  The LCMS had already found the roots of division that still survive to this day.  The transition from German to English ended up with some loss of liturgical tradition (chanting being one) but with a dynamic loss of a common core of hymnody that had tied the Synod's parishes to their earliest Lutheran roots.

When work began on The Lutheran Hymnal in 1929, the Synod was already facing a desperate situation.  While TLH was very well received, its liturgical section did not plow much new ground and is mostly repackaged existing liturgical material from the Evangelical Lutheran Hymn-Book.  The hymn section, however, did not begin to restore the German Lutheran chorale and cemented the inclusion of general Protestant hymnody within the life of the LCMS.  Indeed, some considered the liturgical section too catholic but were comforted by the many texts and tunes in the hymn section that were blessedly Protestant.

The point is this being that the shift from German to English and the diversity of the published materials and practices available in English did much to entrench Protestant hymnody into the character and worship life of the LCMS.  TLH may have stalled the progress but it did so chiefly by surviving an astonishingly long and unchallenged life and usage of more than 60 years.  Lutheran Worship introduced in 1982 never gained a dominant status either for either its liturgical or hymnic resources and was tainted by the conflict in the LCMS that had preceded this revision of the Lutheran Book of Worship and the Battle for the Bible that had left the LCMS still nursing its wounds.

This further illustrates how the official resources and their use have a great influence upon the confessional character of our congregations.  The LCMS retained a confessional liturgy and hymnal longer than any other Lutherans in America but the lists of favorite hymns for the folks in the pews continue to testify to the popularity of English and American hymns held in common with most generic Protestants and the unfamiliarity with the Lutheran chorales and German hymnody that had once been the hallmark of Lutherans on Sunday morning.

We may have slowed the process for a time but the LCMS was poised for the invention of contemporary Christian music which has stolen even more our liturgical and confessional heritage and distanced another generation from the Lutheran hymnody that was once well known by all who called themselves Lutheran.  Ask a typical pew sitter in Missour what their favorite 10 hymns are and you may not find the same Protestant titles as was common a hundred years ago but you will certainly not find many more Lutheran chorales or German hymns on the list.  I dare say that a poll of pastors might not be substantially different.

Long before the advent of contemporary Christian music on the radio and even long before it became common in Lutheran churches on Sunday morning, the LCMS was already struggling with a head that said Lutheran but a heart that sang Gospel songs and Protestant hymns with affection and gusto.  While the published liturgical orders of our hymnals has maintained a catholic identity on Sunday morning (for those who use those liturgies), the songs we hum and the words we love to sing are less Lutheran than generic Protestant (even when the liturgical framework is preserved and the hymns are not contemporary in nature, the American and English hymns predominate).
Posted by Pastor Peters at 6:00 AM

The LCMS changed in the early 20th century from German to English, with much confessional Lutheran doctrine displaced by generic Protestant theology.

The LCMS changed in the early 21st century from CPH publications to Saddleback and Willow Creek worship and study materials, with much confessional Lutheran doctrine displaced by generic Protestant theology.