It was Benedict XVI who used the phrase the hermeneutic of continuity to describe how Vatican II should be understood -- the authentic reading of a Council more typically known for its discontinuity with the past.  I thought that this was the perfect description of the aim of Lutheranism in confessing the faith.  We have not departed from the catholic faith or its practice.  That is the Lutheran claim -- whether you agree or not.  Lutherans insist upon a hermeneutic of continuity -- departing not from Scripture which remains yesterday, today, and forever the same clear and dynamic Word of the Lord that does what it says.  But Lutherans also insist upon this same hermeneutic of continuity in practices, one practice would have to be so bad as to either conflict with the Gospel or to detract so from the Gospel that it in effect conflicted with that Gospel before it would be summarily disregarded and discarded.  Again, this is the Lutheran claim, whether you agree or disagree.

The radical Protestants were known for their hermeneutic of rupture -- the casting off of all that went before.  For the radical Protestants, this meant a judgment that the Church was so mired in darkness that the light of Christ did not shine, the Church was so corrupt as to be impossible to reform, and, therefore, the best and only solution was to start from the beginning.  In one way or another this form of Protestantism has been struggling to re-enact an Acts style New Testament Church -- something that mirrored what began before corruption rendered the Church too far gone to redeem.  Tradition matters little in the pure form of radical Protestantism.  The problem, of course, is that private Biblical interpretation and the papacy of every individual and his or her reason to determine what Scripture said and says means that there is not much unanimity with respect to these churches.

But there is another hermeneutic.  It is, perhaps, the gift of modernity and, as some suggest, the domain favored by the now Pope Francis.  It is the hermeneutic of ambiguity.  The was born when exegetes began to treat the Scriptures as just another book, when skeptics began inserting doubt about the factual and historical truthfulness of Scripture, when ecumenicists decided that a unity born of minimalism and vague statements open to the many interpretations was better than denominationalism, and when those fearful of saying the truth began to hide behind opinions that were subject to change.

The ELCA pretty much admitted this hermeneutic when they disregarded Lutheran confession and the catholic Scriptural witness of obvious passage as well as intent to embrace the GLBT etc. agenda.  This was done in the belief that a new thing was being done by a God whose love now trumped His explicit Word.  They did the same in reconciling diversity to paper over differences in favor of a common communion fellowship with people who had not that much in common with their confession of what the Sacrament was, is, or does. 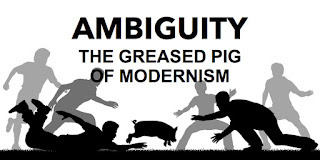 It is the liberal mantra that exists in one form or another in every denomination -- the Vatican II folks who see this as a welcome disconnect with a rigid system of doctrine and authority, the Seminex folks who remained in Missouri but did not disavow their openness for freedom to disagree about what their church taught or to justify practices that contradict with what their church says, etc...   In particular Francis has introduced this into the papacy.  He speaks with enough ambiguity so that many things can be read into his words and he writes that way as well.  He appears to hold to tradition in faith and practice but he allows enough wiggle room for folks to get their hopes up that he is sympathetic to everything from divorce to homosexuality to socialism to the green god of the environmentalists.  Who is he?  He is all things to all people (in a bad way and not in the way of St. Paul).

Unless one is speaking with an attorney, talk is cheap...and claims are talk. Nobody can reasonably argue that a characteristic of all ancient churches (at least after the 1st C) is episcopal polity; indeed, it central to Roman Catholicism. The founders of the LCMS had their reasons to eschew episcopacy for congregationalism, but in doing so they compromised their claim to being conservative reformers and opened themselves up to being identified as cherry-pickers.

ELCA's antecedents embraced ambiguity when they embraced Higher Criticism; what we see now is noguht but the fruit of asking "hath God said?" Indeed, ELCA would be inconsistent if it did't ordain lesbian single mother anti-nuclear whales, and so that body has shown a high degree of consistency. We should be so consistent with our hermeneutic.

As for which bodies ELCA fellowships with, she again has been nothing but consistent; ie they are all denominations of the religion of Liberalism. Their running out conservatives makes them more consistent Galesburgers than we are; it wouldn't taken them anywhere near the time it took for us to be rid of Mr Becker for them to railroad someone like Pr Harrison. Maybe they can teach us something after all.