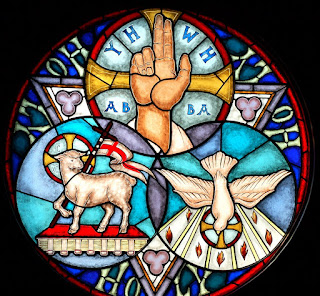 
You wrote, “Before Jesus ascended into heaven to sit at the right hand of God the Father Almighty, He told His disciples that He would send them the promise of the Father (Lk 24:49). He did this on Pentecost, and having received the Spirit, the disciples were enabled to proclaim the Word of Jesus in different languages. “ If a layperson had written this, I would try to correct that person gently. But I am incensed that an ordained pastor, supposedly with a seminary education, would write such nonsense.
On the day of His resurrection, our Lord appeared to the Apostles, and, John 20: 22, “… When he had said this, he breathed on them and said to them, ‘Receive the Holy Spirit.’”
On the day of His ascension, our Lord said, Acts 1: 8, “But you will receive power when the Holy Spirit has come upon you; and you will be my witnesses in Jerusalem, in all Judea and Samaria, and to the ends of the earth." That is what happened on Pentecost. The Apostles did not receive the Holy Spirit but He “came upon them” to give them the special powers promised by our Lord.
Lest you think that I am quibbling about words, our Lord Himself “quibbled” about them when He said, John 14: 16, “And I will ask the Father, and he will give you another Advocate, to be with you forever. 17 This is the Spirit of truth, whom the world cannot receive, because it neither sees him nor knows him. You know him, because he abides with you, and he will be in you.”
Why is this important? Because it prevents ignorant pastors from claiming that what happened to the Apostles on Pentecost is the same thing that happens to us. The Apostles received unique powers which no group of people ever received from God before and never since. To imply that what happens to us in Baptism is the same thing only creates doubt and guilt in people, because they ask, “Why do I not speak in many languages, why can I not heal the sick or raise the dead? Do I really have the gift of the Holy Spirit and do I really have faith?”
Peace and Joy!
George A. Marquart

George, There is nothing in that sermon that you are incensed about that precludes or even presupposes anything different from what you said -- that the apostles received the promised Spirit to speak in other tongues (a unique event) for bold witness to the saving Gospel -- the same disciples who had received the Holy Spirit on Easter evening for different purpose and blessing. If you read a few weeks ago, there was another sermon on this blog (by which pastor I do not know) which spoke of the Spirit, breathed upon the apostles by the Lord on Easter evening - an ordination, so to speak, as I think it was put. It is a quibbling over minutiae to distinguish receiving the Holy Spirit and receiving the power of the Holy Spirit. Can you separate Christ from His gifts or the Spirit from His work? Where does this sermon imply that Pentecost's Spirit, gifts, and power comes to us in our baptism to do exactly what the apostles did? That is a stretch. I know you have a thing for Lutherans speaking more about the work of the Holy Spirit. I have read many times you comments complaining on this blog about either the lack of sermons on the work of the Spirit or the failure to acknowledge the work of the Spirit in conjunction with the topic being preached or getting something about the person and work of the Spirit not quite right by your standards. I am shocked that you are so critical. I hear hardly any mention of the Holy Spirit in my Lutheran parish and certainly not near as much or as clearly explained as the sermons on this blog.

Dear Anonymous: I have been away for two weeks. I tried to answer you from a different computer, but the system would not let me post. I hope you will get this message even though it is “under the fold”, so to speak.
The reason I am agitated is that I have a memory of hearing pastors preach on this topic on several occasions, when they chided their listeners, because, having received the same Spirit as the Apostles “on Pentecost,” we have let our faith become so weak that we are unable to even come close to doing the deeds the Apostles did. This goes back many years, and I cannot give you names and dates, but I can assure you that it was more than once, that I was very disturbed and entertained doubts as to whether I was really a Christian.
My concern is not so much for the purity of the doctrine of the Holy Spirit, as it is for the purity of the Gospel. Hermann Sasse, who quoted a colleague with approval, who had written, “the doctrine of the Holy Spirit has lost its citizenship in the Lutheran Church,” later wrote that if we do not have the doctrine of the Holy Spirit right, it will eventually affect our understanding of the Gospel in a negative way. Just recently I had a pastor write to me that we (meaning Christians, members of the Kingdom of God) receive the Holy Spirit every time we hear the Gospel. I don’t think the matter of the Holy Spirit is that difficult; Scripture teaches clearly about it. We, as a church, should just sit down and make sure we understand what it says.
Peace and Joy!
George A. Marquart