What is happening on Main Street? 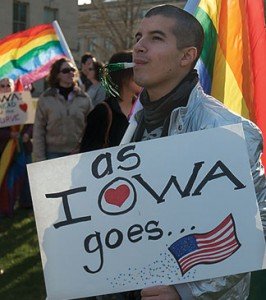 A pair of Iowa churches are challenging a new interpretation of their state’s civil rights act, which prohibits Christians from making gay or transgender people feel unwelcome and from restricting church bathroom use to a person’s biological gender.

A 2007 amendment to the Iowa Civil Rights Act prohibits discrimination in public accommodations on the basis of sex, sexual orientation, or gender identity, among other factors.  Religious institutions are exempt, but only when they are doing something “related to a bona fide religious purpose.” The language is vague, and no churches have been disciplined for discrimination.

But the newest explanation from the Iowa Civil Rights Commission (ICRC), a law enforcement agency commissioned to end discrimination in Iowa, wrote that “a childcare facility operated at a church or a church service open to the public” would be subject to the regulations.

On July 4, Fort Des Moines Church of Christ filed a federal lawsuit arguing that not exempting church services—all of which are open to the public, they argue—violates the First Amendment. Without full exemption, they fear the state government could censor church teachings. .  . .

Longtime First Amendment lawyer David French defended the churches.  “It’s unclear to me how a branch of the Iowa state government has determined that a ‘church service open to the public’ does not have a ‘bona fide religious purpose,’ but there it is,” he wrote. “Under current guidance, churches in Iowa must become ‘members only’ to exercise their religious liberty.”

Folks this is not from the avant garde culture of the West Coast or the judicial activism out of control from Washington, DC, or the latest diatribes from the elitist schools of the Ivy League.  This is from Iowa, in the heart of the Midwest, home of ordinary folks who go to work, keep their lawns, coach Little League, clean up the highways, produce corn and raise hogs.  If it happens in Iowa, then it means that the cultural shift against the free public exercise of religion that violates political sacred cows has come all across America and has touched every aspect of our lives.

Whether this stands or falls, whether the Iowa Civil Rights Commission changes its mind or keeps this interpretation does not matter in the long run.  In the long run the churches face incredible obstacles in the minds of ordinary folks who have slowly come to believe that the protection of religious freedom applies mainly to what goes on behind closed doors in the worship service or in the home and nowhere else.  The destruction of religious liberty comes not from those who wish to take over churches or deny them the right to exist but to proscribe the ability of churches to proclaim their message unhindered to the public and to prevent individual Christians from speaking for the faith in the public square.

I do not believe that the time is coming soon when the government or the courts or public opinion will force churches to change what they believe, teach, and confess but I do believe that the day is coming sooner rather than later when the government, courts, and public opinion will tell churches where they can practice what they believe, teach, and confess.  This is already happening in California with respect to religious colleges and universities.  It is already happening in Iowa (or threatening the churches there and the free exercise of religion).

I am not crying that the sky is falling but I am warning a complacent Christian community that tends to discount the threats against the protections against the government's control of our constitutional religious rights, against the threat of judicial activism that will restrict those protections, and the threat that prevailing public opinion that will allow and perhaps even demand that churches proclaiming something opposed to prevailing cultural values.

Where this impacts us most of all is not in the church building but in the home.  Parents have an even greater urgency placed upon their most important responsibility -- namely, to teach the faith and to teach it faithfully to their children and to instill the piety of that faith through the faithful practice of what is believed.  Catechesis is what is under threat as well as religious expression.  We may not win at the ballot box or in the court room but let us not lose because we were anything less than diligent and faithful starting in the home with our children.
Posted by Pastor Peters at 6:00 AM

These are demonic forces in Iowa and in our nation plotting against God's church. Where are the imprecatory prayers asking God to bring destruction to the efforts and plans of these anti-Christian politicians and kakistocrats?

Luther has examples if the seminaries didn't cover the subject.

Can one absorb all of the reported evidence and not conclude that we will, like it or not, experience cultural and political persecution in America on a scale never imagined? Things will be worse for Christians here between Muslim violence and leftist atheism. Christians need to wake up.

Openly supporting policies and candidates calling for persecuting Christians and churches not towing the Liberal line should be a disciplinable offense leading to excommunication if not repented of; error has no rights. If we won't teach and police our own ranks, how can we complain about the world "out there?"

Pastor Peters makes the point, "This is from Iowa, ..." which is true, but does not quite reflect reality. More correctly, this is Des Moines, which is a bit like saying, "this is from Madison, WI," or "this is from Austin, TX." None of these state capitals are an accurate reflection of their state populations. Each are much more "with it," "avant gard", etc than their respective populations.

That said, Pastor Peters warning is well taken; we must be on guard.

In Texas it is known as The People's Communist Kakistocracy of Austin.