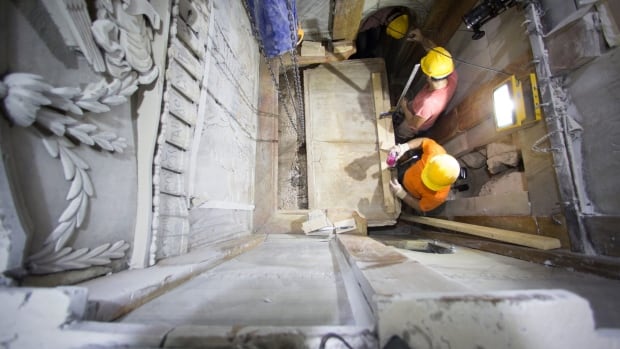 You are looking down into the Church of the Holy Sepulchre.  When workers used a pulley to slide open the marble slab, in hopes of reaching the burial surface, they were moving a slab that hadn't been removed since 1550.  Underneath the marble was a layer of debris. But after removing the debris, they found something they did not expect: another marble slab.  The second slab, grey with a small etching of a cross, dates to the 12th century.  Underneath, they found yet another marble slab that appears to date from the 4th century, the time Constantine’s mother Helena built the first shrine there.  The site will be accessible to more since a window was into the marble slabs to expose the bare rock where Jesus’ body lay before His resurrection.  The site also encloses six other rock tombs, showing that itwas, in fact, a Jewish cemetery at the time of Jesus.

Friends, this adds nothing to the faith but it does serve as a powerful and profound reminder that what we believe is founded on fact and not fiction,  facts that archeology supports and does not contradict. This is where they lay Him but this tomb could not hold Him.  Thanks be to God!