Who owns the Church? 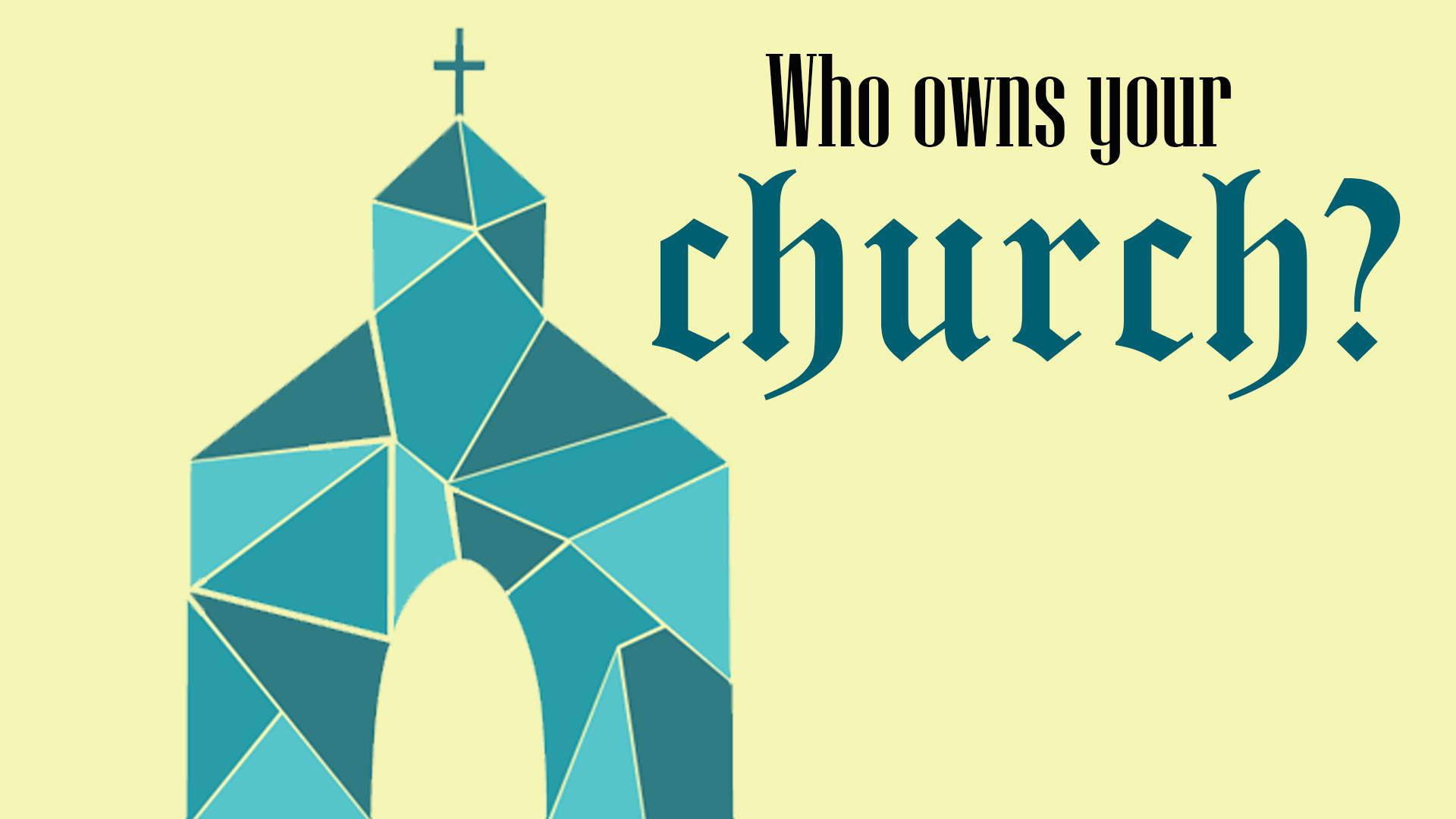 Have you ever noticed that when you approve of something the parish or denomination says or does, it is "my" church.  But when you disapprove of something the parish says or does, then it is "their" church.  We struggle with this idea of identity on many levels.  People in my own tradition love to castigate the "purple palace" (euphemism for our headquarters building) just the way some love to talk about "Rome" or the "pope" or the "bishop" -- these are used to distance the individual or even the congregation from the larger church.  In the parish, people love to blame the pastor or parish leaders and distance themselves from things they disagree with.  The "pastor" runs the church or this family or that group.  We all know it and have heard it before.

Though we in the Missouri Synod have had our own epiphany about episcopal structure through the faults and failings of Bishop Stephan, prior to coming to America much of what people complain about in the congregation was decided at a level higher than the parish.  In Germany jurisdictions took responsibility for many of the things that local congregations now decide (or their pastors) and it was also cozy and comfortable with the government itself.  This is what Luther knew.  He was hardly the congregational spokesman we try to make him out to be.

America and its experiment with democracy had profound impact upon institutions -- even churches.  Those churches with episcopal structures have seen their authority question and even challenged.  Who can forget the millions upon millions spent by the national church and diocese of the Episcopal Church to prevent individual congregations from seceding from the church with its bank accounts and property in tact.  In Roman Catholic America we saw the invention of parish councils and lay boards where once the priest made all the decisions (except those the bishop made).  Born in the 19th century,  “lay trustees”— the system of lay boards that owned or controlled parish property and even claimed authority over the appointment and dismissal of pastors—was a major problem for Roman Catholic bishops as well as their Protestant cousins.

Who owns the Church?  It remains a rather significant question even today.  Mega churches and media giants are often family owned and operated enterprises with self-sustaining boards of directors that make all the decisions without much input or review from those who sit in their theater seats sipping Starbucks during worship.  Lutherans try to divide authority and responsibility but not always without some confusion and messes.  Those with episcopal structures have tried to minimize the idea of centralized control and flirt with local input and direction.  All of this has to do with important issues of property, tax exemption, etc...  but I wonder if our pursuit of this side of things has not allowed us to forget that we do not own the Church.  Christ owns His Church.

The Church is not ours either to own or to control; the Church belongs Christ’s. We did not create the Church and we say that the Spirit is her life.  As Luther put it so well paraphrasing Christ  (“You did not choose me, but I chose you”), the Spirit calls, gathers, enlightens, and sanctifies the Church.  No earthly power, no marketing schemes, and no individual effort creates the Church.  She is Christ's bride and she belongs only to Christ. The Church was established by Christ Jesus and washed and cleansed by His blood.  We put blood, sweat, tears, money, and time into her but because we are part of her and not because she belongs to us. So the Church is not ours to “take back,” and it is not ours to "lose" because she was never ours to “own.” As soon as make the Church our own, we betray the Lord whose Church it is.

So worship is never a preference or choice made for what works or what people like.  It is and must always be the domain of Christ, the Word and the Sacraments, and in this the voice of the living is not louder or stronger than the voice of the dead who passed to us the best of the past.  So doctrine is never about what fits with culture, the prevailing world view, the particular trend of science, what seems reasonable, or what will sell.  No, it is and must be the Word of the Lord which endures forever and the truth that does not change but is yesterday, today, and forever the same.  We will admit no novelty nor will we tolerate the loss of what was believed, confessed, and taught.  We conserve and preserve (the Reformation principle).

Building ownership is important and decisions about budgets and spending plans are nothing to sneeze at but this is not really where the Church lives.  We live in and by the means of grace.  These belong to Christ and our only authority is to see that these remain the center and foundation of all we are, think, and do.  Who owns the Church is a question fraught with problems.  But when we are all working as best we can with the resources God has supplied to do His bidding faithfully and vibrantly, the question of ownership is really not so important at all.  In congregations where a lay structure exists and works well, they do not forget this.  In congregations where conflicts lie or where structures are failing, it is usually because they have forgotten this.
Posted by Pastor Peters at 6:00 AM

Interesting historical perspective on church "ownership." I suppose there can be problems whether or not it is centralized or locally run, but I think the idea we are "stewards" should be the first consideration after we recognize that "our" local church is part of God's church, and for this reason alone it exists on earth. As for doctrine and theology, we need to be Biblical from the top down and the bottom up, and must avoid fads and teachings which we see in other denominations and instinctively realize are not appropriate. This is where Missouri must be strong and forceful in encouraging unity. A detached view and hands off policy at Missouri will result in a fragmented synod.

"People in my own tradition love to castigate the 'purple palace' (euphemism for our headquarters building) just the way some love to talk about 'Rome' or the 'pope' or the 'bishop' -- these are used to distance the individual or even the congregation from the larger church.

The "Purple Palace" (aka "Violet Vatican") is not the Church, does not represent the Church, nor is it a church. Such notions are remnants of Stephanism.

Again correcting the scotoma, the epiphany ("an illuminating discovery, realization, or perception") about episcopal structure among those Missouri Saxons who would eventually form the Missouri Synod was clearly identified by C.F.W. Walther:

"With deep gratitude I must here recall that document which, now almost a year and a half ago, Doctor Vehse, Mr. Fischer, and Mr. Jaeckel addressed to us. It was this document, in particular, which gave us a powerful impulse to recognize the remaining corruption more and more, and to endeavor to remove it. Without this document -- I now confess it with a living conviction -- we might have for a long time pursued our way of error, from which we now have made our escape. I confess this with an even greater sense of shame, because I first appeared so ungrateful toward this precious gift of God. But although many with me handled with great unfaithfulness the light which was granted to us, yet God did not cease to cause ever more beams of truth to fall into our darkness; to tear us away from many a point which we, in our perverseness, sought to hold; to uncover to us great and perilous injuries, and to lead our hearts more and more in the way of truth." (William J. Schmelder, "Walther at Altenburg", Concordia Historical Institute Quarterly, Vol. 34(3), October, 1961, pp. 65-81, referring to Walter A. Baepler, A Century of Grace, CPH, 1947, pp.47,48, quoting from J.F. Koestering, Auswanderung der saechsischen Lutheraner in Jahre 1838, ihre Niederlassung in Perry-Co., und damit zusammenhaengende interessante Nachrichten, A Wiebusch u. Sohn, 1867, p.43-45)