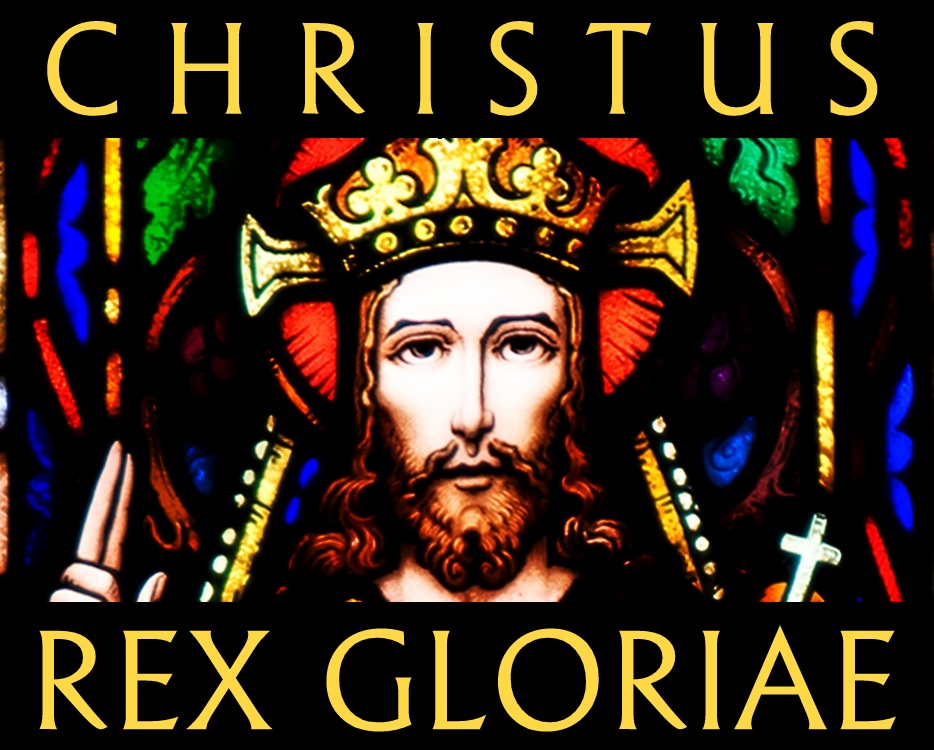 In a world with a penchant for happy endings in which everything resolves, the underdog wins, and the righteous prevail, Christ the King Sunday fits perfectly.  In a Church which confesses Christ King in the womb, King in the temple both for his presentation and for his tutelage of the scribes and elders, King in the waters of the Jordan, King roaming with His disciples, King on the donkey, King in the Upper Room, King in the Garden, King in suffering, King on the cross, and King even in death, well, it just seems odd.  We do not acclaim Him King at the end but see Him King from the beginning in the great mystery of the faith.

I always felt like the attempts to organize the end of the Church Year (think LW and its calendar of 3rd last, 2nd last, and the end or LBW and its Christ the King after Rome) were all being too neat and tidy.  I can understand it and do appreciate the intention.  But the whole thing is just off.  It is off to get to the end of the Church Year and suddenly acknowledge Christ is the King when it is exactly that He is King from the very beginning, the incarnation, and all the way through.

It just seems like we are trying to fix the story so that Jesus Christ becomes King at the end of the sequence, the end of the story, as the result of a long process.  As another has already noted, cleaverness sometimes confounds and confuses rather than clarifies.  Here it is exactly that.  It confounds and confuses Jesus' self-revelation and treats it as if each was merely a chapter in the story leading up to the great climax at the end.  Furthermore, it is not even the end. . . yet.  Instituted in 1925 by Pope Pius XI for the Roman Calendar, Christ the King was a convenient foil to Reformation Sunday (both observed at the end of October). In 1970 Rome moved it to the last Sunday in Ordinary Time.

Furthermore,coming right before Advent and its Palm Sunday entrance just agitates against the truth, fostering the idea that He is King at the end of His redemptive suffering and not King on His way to that suffering.  Looking at this again, it makes me glad that those responsible for the LSB calendar avoided the temptation and ditched the popular but unsatisfactory label of Christ the King and that they also avoided the other attempts to give the end of one Church Year a big smash (Sunday of the Fulfillment, being just one of those names).  Instead we got the rather pedestrian Last Sunday of the Church Year, which it is.  And maybe we should just leave it at that.
Posted by Pastor Peters at 6:00 AM

I think of the doldrums of the coming Winter, and am reminded, 'Yes, Christ is King, and he will come again in glory!'

Pastor Peter, here's some persuasion...
Consider how the 1 and 3 year Lectionery readings for the Last Sunday all bring to bear Jesus speaking of His coming as a King, others referring to Him as a King, and Jesus speaking of His Kingdom. Christ the King Sunday seems most fitting, not unlike the historical Church squirming with idea of having one particular Sunday called a "Trinity Sunday." Same reasoning. And how is it, both 1 and 3 year, we all have an unofficial "Good Shepherd" Sunday in the Easter Season. Same reason, why would we ditch that theme? Especially as the Eschaton, His Kingdom language overflows the last 3 Sundays of all the Lectionery's, how fitting an end as confessing Christ the King. Then of course, we know the close of the "final Church year" certainly will be called Christ the King Sunday.

For many years, Anglican and Roman Catholic use observed Christ the King as the last Sunday in October, well before the beginning of Advent. It is thus appointed in the 1928 Book of Common Prayer.

Yesterday, the last Sunday of Trinitytide, is known (again in Anglican circles) as Sunday Next Before Advent. It is also called "Stir up Sunday," a reference to the opening lines of the Collect for the day.

Question? When I first became a Lutheran, am I remembering correctly that in my church, we had a Sunday called A Day of Humiliation and Prayer? I think it was the last Sunday of the Church year.

This is symptomatic of one of my criticisms towards western Christianity. In my view (as well as that of many others), feast days and Sundays should commemorate an actual EVENT, not some sort of idea. Christ the King is one of those Sundays which really doesn't do anything. IT's no different than the RC feasts of the Sacred Heart or Corpus Christi or Seven Dolours of Mary or even Trinity Sunday? What events do those commemorate in the life of the Church or her saints.

Ah, Larry dear brother, this Evangelical Catholic Lutheran celebrates Christ the King on the last Sunday of the Church Year wherever I happen to be serving every year. White vestments, a celebration that all is new, and the old passes away forever. I preach less about heaven than I do the restoration of the new heaven and new earth: there will be no time, we will not age, but most important of all is that the Triune God is fully present to us, as He was to Adam and Eve. I, for one, can’t relate to the idea of a king because I was born and raised in the USA, but I try to convey the final consumation of all that God intended for us before the Fall in the Garden. No more Satan, no more evangelism, sadly I will be out of work as Pastors will be replaced by the amazing presence of God forever.

My little “pea brain” can barely understand the fact that there are imperceptible dimension of time and space around us that we will be a part of...;no, I can’t brief you on specifics, but I love to guide the congregation to imagine what it will be like....and then get back to work....