From one thing to another. . . 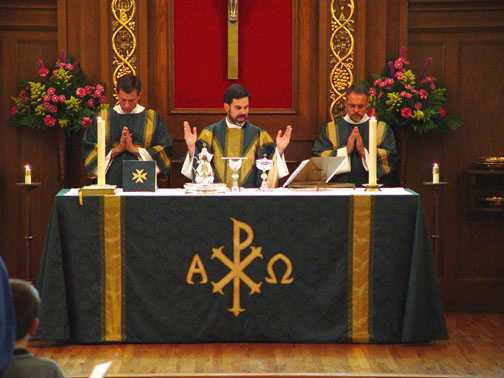 At the time of Luther, the Mass was hardly uniform.  In fact, it's diversity of practice was aided by the overwhelming complexity of rubric and calendar.  This diversity of liturgical practice reflected regional and local priority over Roman usage.  Though the Roman Rite was given place, the fact was there were many more local or regional variations to the Roman Rite.  Some of them were rather well known and carried a name that is identified even to this day -- such as the Gallican Rite, the Ambrosian Rite, and the Sarum Rite, among others. From time to time popes and councils worked to bring more uniformity to the the liturgy and they promoted both the purity and antiquity of the Roman Rite.  Eventually, the Council of Trent was convened in part to deal with this diversity and to rein in the regional and local variations.  Trent ended up decreeing that rites and practices younger than 200 years old should give way to the Roman Rite and its practice. There was deference given both to antiquity and to the cause of  uniformity that was supposed to reduce both novelty and recent innovation.

Though we often presume Rome was and is monolithic, when it came to the liturgy, this was not the case.  Even the Council of Trent was not able to erase the unintended diversity of liturgical form and practice.  Some of Trent's decrees were either ignored or not enforced. Local and regional variation was paused but not halted and within a couple of hundred years another major council would deal with this disorderly state of liturgical affairs again.  A hundred years later, in the wake of Vatican II, diversity would again be fostered by those who believed in local and regional authority.  In one sense this debate is still going on in Rome since Pope Francis has decided that the congregation or department of the Vatican that deals with worship would no longer create liturgical changes but approve those begun on a more local and regional level.

All of that is interesting enough to a Lutheran but the diversity of Lutheran liturgical practice is more than a curiosity, it has become a crisis.  Where Rome's diversity was within a more narrow boundary,, modern day Lutheran liturgical practice has become contradictory and confusing, perhaps even scandalous.  Lutherans go from congregation to congregation and find radical differences in worship form and "style."  On the one hand, they encounter Lutherans worship very formally, following rubric and observing the ancient form religiously.  On the other hand, Lutherans worship without any liturgy, indeed without the Sacrament being the center of the service at all.  This is not merely a matter of "style" but of confession and identity.  Does Lutheranism have a face or form on Sunday morning or not?

In early Lutheran history, diversity was more narrow.  Jurisdictions defined how Lutherans would worship within a particular geographic region.  Worship practice was not strictly congregational at all.  Even when Lutherans showed up in America, their diversity of worship practices mirrored the churches they left behind.  Scandinavians tended to be more liturgical and some Germans less so but only those who were thoroughly Americanized stretched the limits of liturgical identity.  All of this became somewhat moot when by 1888 Lutherans were more or less united liturgically in the Common Service.  Though Lutherans nearly a hundred years later sought to publish a common hymnal, the reality was that liturgical unity was pretty much in place, at least until 1958 when the Service Book and Hymnal changed the canon with the addition of a Eucharistic Prayer.  But the high point of Lutheran liturgical unity has come and gone.  Now Lutherans may not know what they will find on Sunday morning.  Lutheran identity is suffering from this extreme diversity.  The genie is out of the bottle and it appears that no Lutheran jurisdiction in America seems willing or able to restore any real unity and uniformity to Lutheran worship forms and practices.

Some have tried to make this a matter of low church or broad church or high church.  It is not a matter of how much or how little ceremonial or even whether or not vestments are worn.  It is matter of whether or not faith is born of the Word and nurtured by the Sacrament of the Altar or faith is a decision and worship is about getting God to sanction what you desire for you and your life.  Modern technology has made this abundantly clear.  On one hand a group of Lutherans has put out a video that some have called too Roman and yet this video follows the official book and liturgy and the red letters of the rubrics, with few additional ceremonies clearly within the scope of Lutheran history and practice.  On the other hand congregations ostensibly Lutheran (though they may not use "Lutheran" in their name) look, act, and sound like ordinary Evangelical, non-denominational churches without the liturgy but with a form of singing, praying, and preaching/teaching that entertains the people more than meeting them on the holy ground of God and His gifts of Word and Sacrament.  Lutherans have become adept at distinguishing theory and practice, substance and style, to the point where what happens in worship is no longer directly tied to what is believed, confessed, and taught.

We have gone from one kind of diversity to another.  Lutheran identity is in chaos.  Where will it all end?  I wish I knew. . .
Posted by Pastor Peters at 6:00 AM

Lutheran identity will be driven by congregational practice, with the Michigan and Texas districts going their direction, Atlantic theirs, Indiana theirs, etc. In general, the churches are responding to Lyotard's casualization of society, and one should not paint with too broad a brush that any non-liturgical worship is by definition not Lutheran. Perhaps a solution would be for the synod to develop a body of contemporary Lutheran hymns and orders of contemporary worship. According to the Solid Declaration, the essentials of Lutheran worship are the pure preaching of the gospel and right administration of the sacraments. What's surprising is that the 1983 CTCR report on Communion wants to treat the frequency of offering the sacrament as an adiaphoron, stating that no set number of times should be attached to the offering of the Lord's Supper, yet the confessions speak of preaching and the sacrament as the only two things that stand outside ceremonies, which are not to be a source of condemnation if churches have more or less of. In a sense, the CTCR report is correct, since if no one desires the sacrament it must not be offered, but we are a long way past the times where this may have been a real possibility.

I agree with "Anonymous" in that congregational practices seem to be working against unity of worship in the LCMS. Pehaps, the reasons are found in the American penchant for independence and democracy as codified expressions of self-rule. Bonhoeffer, when he visited this country before World War 2, was puzzled by the independence of American churches. He would be shocked if he saw exactly how bad it is today, and the Lutheran camp alone is fractured into progressive vs orthodoxy by individual congregation. I pray the LCMS will hold together in spite of this tension, but only if leadership exerts itself at the Synod. Otherwise, each LCMS church will look different. Not a great outcome.

Perhaps different ways of presenting the same means of grace to different people in different places is a strength, rather than a weakness?

In the last 75 years the LCMS has had 3 different hymnals produced.
The 1941, the 1981, and 2006. Instead of revising and updating the
1941 hymnal, the 1981 one opened the door for everyone to do their
own thing. With the advent of the computer it became possible for
a parish to produce their own order of service each week and no
hymnal was needed.