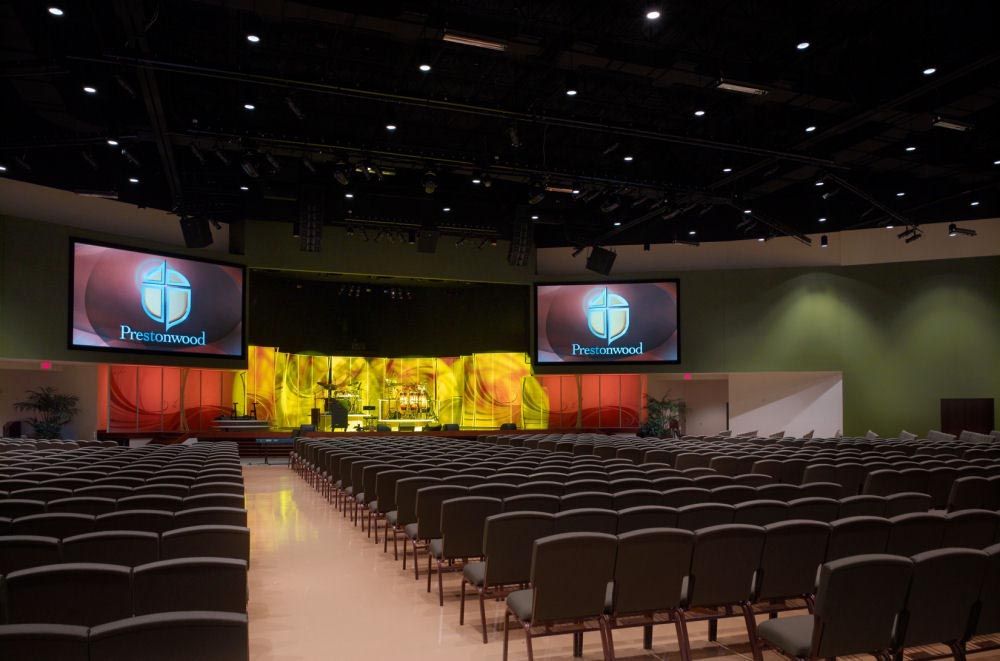 One of the things I have noticed is that most non-denominational churches and those who wanna be like them use buildings with few or no windows.  Indeed, they worship in the dark.  Literally.  Not only do they lack stained glass, they also are without liturgical art and furnishing.  The whole atmosphere is rather carefully controlled.  Screens are the few places where images are seen and those images are the domain of the preacher and/or worship leader.  Stages are replete with dramatic lighting, high powered sound systems, and the best video production that the congregation can afford.

Churches have become blank pages upon which every Sunday gets written in music, image, and sermon.  The buildings are often vast warehouses with few finishes.  In them form and function are more important than art and beauty.  Where once the church building was a sermon in stone and glass and wood, now churches are open spaces with grand stages for worship which has become performance oriented for a people whose role in worship has become as passive as it once was prior to the Reformation.

Walther once famously suggested that the churches he encountered in America had become lecture halls.  Now the lecture hall and the holy of holies have both been replaced with theater with the best production value money can buy.  Furniture, if there is any, is made out of lucite so that it blends into the backdrop.  Front and center are people.  The musicians of the praise bands stand out front and center.  The "pastor" performs with a modern day costume of current style and a casualness that belies the scale (especially in the mega churches).

It is no wonder why misconceptions about worship are all around us.  People come to buildings that look like shopping malls on the outside and on the inside look like theaters so it is no wonder that they expect to be entertained and define what happens there less by orthodoxy than by preference, happiness, and enjoyment.  At the same time, it is unmistakable that such venues emphasize the centrality of the worshiper more than the means of grace.

In the end, the Church will not be judged by people but by God.  We will have to own up to Him our sins and failures and it is clear from Scripture that God values faithfulness more than anything else.  After all, the Word remains His and its outcome and accomplishment remains His domain, not ours.  If we fail because we have faithfully confessed and taught the Word, the failure is not ours.  But if we fail because we have rejected the Word and chosen to grow the Church our own way, then the failure is all ours.  I hope that we will reject relevance for faithfulness but I acknowledge the temptation is great to believe that we make the Church grow and prosper instead of God working through the means of grace by the power of the Spirit.  In the end, we may be more in the dark than even our modern church buildings.
Posted by Pastor Peters at 6:00 AM

Recently I visited a local Methodist congregation much like what Pastor Peters has described. I was appalled to see what looked like a fire main running across a few feet about the altar (bare table such as it was). It was much like a warehouse, with the inner walls simply the inside surface of the outer sheet metal walls, corrugations and all.

I also visited an ELCA parish that was similar, but at least the walls were fairly smooth. One of the striking features was the control booth off to one side where vast consoles controlled the sound, lighting, and video. The seating was all movable and there were convenient niches where the altar table and the small pipe organ (a tracker action, no less) could be pushed off to the side to clear the floor for basket ball or whatever.

The term "holy" as in set apart for the use of God does not apply in these environments.

"Not only do they lack stained glass, they also are without liturgical art and furnishing" and they are bereft the cycles of the Church’s liturgical calendar. How dismal.

I'd thought I'd seen every thing until I came across the "Beatles Mass" conducted/performed at a local United Methodist Church:

Go ahead, look it up. Church has become whatever our imaginations wish it to be.

There is an ELCA church in suburban Minneapolis that has a big window over the alter that looks out over a beautiful scene of woods and a lake. The sancutary has a lot of natural light and it makes me stay awake and alert to see God's beautiful creation while sitting in church. I was the guest of a friend who is also a former LCMS, we tend to find each other.

Enjoying physical light while propagating spiritual darkness doesn't sound like a winner to me.

I was just going to say that that it is a common distraction of worshipers to want to focus on the creation instead of the Creator and His redemptive work in Christ Jesus. For example, here is a hymn of praise for creation, family and friends, and good times that only nibbles around the edges of the redemptive work of Christ. It reminds me of a secular family gathering for Thanksgiving dinner and each giving a recitation of material things for which each one is thankful and conspicuously omitting any mention of their salvation from sin, death, and the devil by the cross work of Jesus, in so many words. Enjoy!