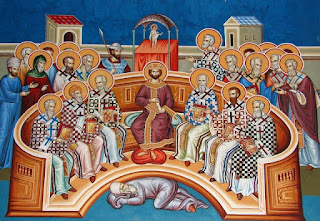 If, as so many have opined, the first Vatican Council was largely about the papacy, could it be said that Vatican II was largely about the episcopacy?  It might seem to be a stretch since so much of what we think of in the context of Vatican II is liturgical.  Yet, the liturgical fruits of Vatican II were not directly from the Council but came after the Council had closed and bore the imprint of Pope Paul VI and his minions.  There is less that is out of step with Trent in the actual documents of Vatican II than the liturgical changes which followed, by all accounts a radical departure from Trent in form and practice.


The tensions of the papacy now might just require another council to decide if popes are guardians of the faith and custodians of the unchanging doctrine or if they can make changes and, if so, what kind of changes, and what constitutes a departure from the past and what might be defined as an elaboration of the dogma that does not change.  That said, clearly the fruit of Vatican II lies in the role and place of the bishops of the church.  It begs the question of whether or not the Roman Catholic Church is synodical or episcopal or papal.

If it did not create them, Vatican II did give place and purpose to episcopal conferences and endowed them with a particular authority and role that was distinctive.  Since Vatican II, the bishops have not only exerted this authority and relished some independence in their role but have used it with great effect to build national identities that have distanced themselves from some of the teachings of the Roman Catholic Church.  Amoris Laetitia has certainly seen how this has worked but before this political causes (think here liberation theology as but one example) have occupied some of the attention of these conferences.

When the sexual abuse crisis hit the Roman Catholic Church, the episcopal conferences took on another role not only as those who collectively as well as individually had to deal with the aftermath but also those who took on the cause of rebuilding the credibility of Rome where priestly abuse had torn it down.  At the same time, the distancing of bishops without a major problem from those who had knowingly or unknowingly expanded the trouble let some of these conferences even more divided than over theological issues.


A few voices, in response to the 500th anniversary of the posting of the 95 Theses of Luther, have suggested that if a council had been called, as Luther desired, perhaps the whole Reformation would have been either resolved or dealt with more cleanly than did papal response.  That brings up a question Luther was quick to raise.  He believed himself, at least initially, to be responding to a court of the pontiff that had become corrupt and inept but hoped that a council would be able to consider the need for reform and renewal and, since it had a greater authority than the pope, would have rendered certain verdict on that need.  It is speculation, to be sure, but it continues to raise the question of whether there is a collegial episcopal shape to Rome or simply a papal one and to what degree do the bishops, individually or in conference, stand apart from the pope.


Pope Francis has certainly toyed with the idea of synodality.  Where that goes or what it looks like, who can predict?  That said, such an enterprise is fraught with the same sort of problems and possible manipulation as any other structure, perhaps more so.  After council has spoken, there is no way to prevent the pontiff from shaping the outcome any less than Paul VI radically interpreted the rather modest reforms of the Mass actually taken at Vatican II.  There will surely be some who think that synodality and a renewed emphasis on councils could offer an olive branch to the East always interested in ecumenical councils as the supreme voice of the Church.

The state of Rome is nearly as fractured as Protestantism.  Francis has used his office effectively to promote confusion more than clarity and diversity more than uniformity.  In the end, Luther would not have been happy with Francis at all.  What Luther sought was clarity, clarity guided by the Biblical witness, with a Church gladly hearing, believing, and following the voice of God speaking through His Word.  Luther would have loved to have bishops who were the leaders of such a renewal but did not believe them to be essential to it.  Luther would have tolerated a pope who was the uniform voice of such a renewed Biblical and catholic witness but would not have agreed to the papal court, control, or ex cathedra claims of truth.  What is surely true now 500 years later is that Luther would have surely been disgusted by those who claim to be his heirs and just as disgusted by the Roman Catholic Church that was so much the object of his vitriol.  In the end, Lutherans find that they cannot claim one voice from either Luther or the Lutheran Confessions since Lutherans stand so starkly divided and they have little hope of leadership from Rome mired in a confusing pope and a structure seemingly unable to get its own house under control.  So maybe it is time to think less global and more local, less about structures and more about the parochial opportunities of faithful communities gathered around faithful pastors.  Hmmmmm, it is beginning to sound more and more like a Benedict Option, eh?

The argument I make in my book is that in order for us Christians to be the blessing God calls us to be for the world (to ‘bring the light that can vanquish the darkness’), we need to withdraw substantially more from that world than we are doing now, for the sake of building ourselves up in prayer, contemplation, and community. This, so we can go out into that same world living as actual Christians, no matter how great the sacrifice.

My thesis is that we are going to have to first step away from our culture if we are to truly embrace it and connect it to Christ and his word.... So where do we go from here? If the problem we face is not the secularization of society but the secularization of the church brought about by importing expressive individualism into the church, then we simply cannot face contemporary challenges individually. It is time revive and recover the third article of the Creed; to live corporately and communally in a world of expressive individualism. Rather than contributing to the fracturing of human community we Christians need to concretely demonstrate how God sets the solitary in families. We need to show how the Holy Spirit calls, gathers, enlightens, and sanctifies people one by one through the gospel, and then draws them into communion in his holy church.