As others have reported in the article:  “Spiritual But Not Religious” Is Associated With Depression: 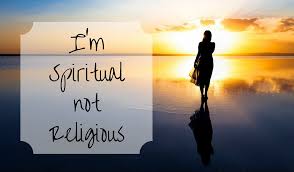 Why would this be the case? The survey data did not estimate specific factors related to depression, so it is only possible to speculate. While religion represents deeply rooted belief and practice, usually coming from family and cultural background, spirituality represents a departure from that traditional, familiar support.

People seeking spiritual answers may be coming from a position of distress, searching for answers or looking for relief from mental suffering.  Such folk may be more vulnerable, leading to a failure of religion to prevent depression. In either case, this could create a self-selected higher risk spiritual-but-not-religious group. Those who have lost or abandoned traditional faith may have additional risk factors for depression, potentially connected with problems growing up, directly related to religious institutions or family practices, which may have led them to move away from religion.

It would be easier to take up a rant against the spiritual but not religious.  I wonder about other questions associated with this survey.  Are the spiritual but not religious people who are entering the whole dimension of faith or those who are leaving it but who want to hold on to parts of their past?  Are the spiritual looking for or even expecting the same things from spirituality that religious are looking for or expecting from from religion?  Is feeling better (i. e. not depressed) a good marker to use for the value of spirituality or religion?

It is also curious that Christians, who are told to expect rejection, suffering, and persecution and even to glory in them, still seem to be more hopeful and at peace than those who avoid such rejection, suffering, and persecution by following the crowd.  Is this hope and peace associated with a way around the distasteful condemnation and its consequences or is it the stuff that enables the Christian to not only endure but to thrive in spite of it all?

There are many things wonderful about being part of the faith, the faithful community gathered around the Word and Table of the Lord, but I am not at all sure that we should either expect or presume the promise that on the whole we will be happier because of the faith.  Indeed, the whole goal of the Lord is less our happiness than our holiness, a faith tested like gold by the fire of the smelter and not by a light polish of the cloth.  Holiness is not a pursuit that is generally associated with happy times -- unless, of course, your heart has been recreated in Christ Jesus to love what He loves and seek what He seeks.  Then, my friends, holiness and happiness may just find their perfect intersection, begun in this present day and brought to completion in the world to come.

I think the spiritual are less communal and tend to be more isolated. They tend to go it alone, eschewing the fellowship of the church and pastoral care for a serendipitous life with less structure. They avoid the very things God uses to preserve and sustain body and soul which eventually catches up to them when their support structures fail.