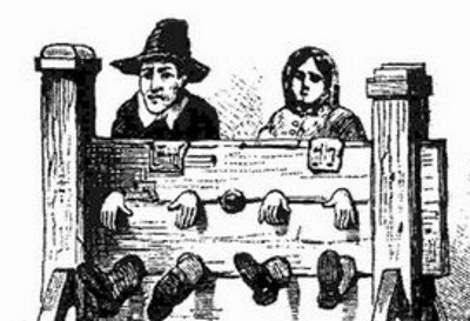 Conservatives are usually the ones accused of being control freaks.  They are the big bad oppressive collective conscience sneaking into the bedrooms of America.  In reality, it is just the opposite. Oh, it is true that conservatives do not to promote the collective morality of right and wrong but they have little interest in being thought police or monitoring the bedrooms of the world.  They do believe that what is promoted in the media should not be the base and vulgar character of who we are but our better face, our nobler identity, and the virtuous over either the mundane or the evil.

No, the conservatives are not the new Puritans.  It is another movement for which the desire is to control not only what is said in public but what is thought.  No one must be allowed to say or even to think (if that thinking might influence action) anything contrary to what political correct thinking has determined is good, right, and true.  Take the whole idea of transgender and the great debate of which bathroom should be used.  Take the whole idea of the #metoo movement for which guilt need not be judged by any court for the individual to be condemned.  Take the "Baby, Its Cold Outside" Christmas song objections that cause some radio stations to pull a staple from their playlist.  The list keeps getting longer.  In fact, this group had to invent a new term (intersectionality) to figure out the ranking when the same individual has conflicting identities (a white gay male who is two strikes the oppressor for being white and male but gets one strike subtracted for being an oppressed identity as a gay white male).  Wow.  The lengths some will go to tell you how to map out the world according to the new standards -- not of right or wrong but of what is tolerated and what is not.

These postmodern Puritans not only want to control what appears in social media, what can be said on air, what music can be played, and what cannot be tolerated.  No, indeed, these Grinches get to decide what the standards are and change them at will.  So, returning to the Christmas playlist scandal, White Christmas is inherently racist -- even though it is about snow!  So the morality of  1940s America and Baby, Its Cold Outside does not matter but in a rape culture of the 21st century the police can change the laws to decide what is allowed and what is too abhorrent to be tolerated.  The creche is out, the burka is in.  Go figure.  The Christians are the oppressors and those without any real convictions are the victims.  Truth is determined by the feeling or the moment or the subjective judgment of the individual.  In the end, it is about control.  Conservatives want to conserve values that have stood the test of time and believe in what Benedict XVI defined as a hermeneutic of continuity.  Not so the post-modern purveyors of truth in a can, drink it up, pee it out and toss away the can (oops, recycle -- make the truth into something more usable!).

The Church must do more than simply survive, she must unmask these lies as often and as much as she is able.  This starts less with the public war of words than it does faithful teaching in the home.  This is what I get from the Benedict Option.  Not so much a disengagement as much as a doubling down to make sure that Christianity is believed and lived where it is supposed to be -- first in the home, then in the relationship to neighbor, and finally in the good citizenship that honors the rule of law as long as God's Law will allow.  It is not a fight for control but for the freedom to be who we are -- something the Bill of Rights was thought to have guaranteed but maybe not so much now.  It is not simply a freedom to believe as you choose or to worship whom you choose but to live out this faith.  If it is guaranteed for the Nones but forbidden for those who confess the Nicene Creed, then we have a constitutional problem.  Again, the Church is not the oppressor, the new force of Puritanism.  That role has already been claimed by those who drew a line in the sand and then keep on drawing the line wherever they choose.
Posted by Pastor Peters at 6:00 AM

"No, the conservatives are not the new Puritans."

So who are they?!? Well, from the article, they are they-who-cannot-be-named. Instead we are given euphemisms:

"another movement"
"this group"
"postmodern Puritans"
"these Grinches"
"post-modern purveyors of truth in a can"
"those who drew a line in the sand and then keep on drawing the line wherever they choose."

As seen below, the "new Puritans" are simply the old leftwing fascist organizations, like the Demonicrats, supported by the fifth-column leftist media.

"With six weeks left until election day in Wisconsin’s Supreme Court race, several far-left organizations are using media outlets to amplify a smear campaign against a judge based on his Christianity. Brian Hagedorn, a current Wisconsin Court of Appeals judge and former Scott Walker legal counsel, is being publicly trashed for being on the board of a small Christian school, and for blog posts when he was in law school discussing court cases about abortion and gay sex.

"The argument against Hagedorn seems to be that no faithful religious believer can also be a good public official, in line with a crop of similar attacks on federal nominees at the federal level from prominent Democrats including Sen. Dianne Feinstein, Sen. Cory Booker, Sen. Kamala Harris, Sen. Mazie Hirono, and Sen. Bernie Sanders."

Excerpted from the Federalist article, "<a href="http://thefederalist.com/2019/02/18/leftists-wi-supreme-court-candidate-cant-good-judge-youre-christian/>Left To State Supreme Court Candidate: You Can’t Be A Good Judge Because You’re A Christian</a>."