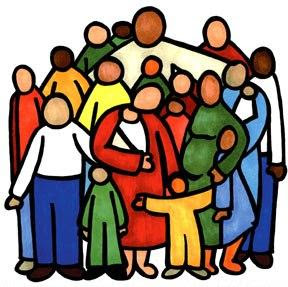 “Walking together, this is already Christian unity,” said Pope Francis, “but not waiting around until theologians agree so that we arrive at the Eucharist. The Eucharist is performed every day through prayer, through the remembrance of the blood of our martyrs, through works of charity, and also by loving one another.”  The Pope gave a concrete example of such an  “ecumenism of prayer:”


In one European city, there is a good relationship between the Catholic archbishop and the Lutheran archbishop. The Catholic archbishop was scheduled to come to the Vatican on Sunday evening, and he called me to say that he would arrive on Monday morning. When he arrived, he told me: “Excuse me, but yesterday the Lutheran archbishop had to go to one of their meetings, and he asked me: ‘Please, come to my cathedral and lead the worship.’” Eh, there’s fraternity. Coming this far is a lot. And the Catholic bishop preached. He did not do the Eucharist, but he preached. This is fraternity.

As cardinal archbishop of Buenos Aires, the Pope was also in the habit of preaching in Protestant churches.

Now some of you probably laud such ecumenism and practice it.  Some of you may think that this is exactly the kind of hospitality in worship that ought to characterize churches even when doctrinal and liturgical differences divide them.  Some of you may even think that this is just the kind of thing that will result in real ecumenical accomplishment.  I think you are wrong and that this kind of thing is a sad betrayal of what preaching is and what ecumenism ought to be.

To enter the pulpit is to undertake the most solemn task and embrace one of the most profound responsibilities laid upon the Church by our Lord.  We are warned over and over again in Scripture about those who treat the Word of God carelessly or lightly.  We are given clear directions for those who would be set apart by Word and prayer for this responsibility.  We are given many injunctions against substituting the words of man for the Word of God or distorting the kerygma with that which has neither been commanded or sanctioned by God.  No one of differing confession should preach in our churches and we should not preach in churches where we have no confessional unity.

Note that there are plenty of occasions and venues where it is entirely permissible and even laudable for us to address one another, to speak the faith before others, and to cooperate in externals for the sake of the urgent causes before us (the poor, the pro-life cause, works of mercy, etc.).  I am not saying that we should never address one another.  What I am saying is that what happens on Sunday morning and within our own churches is too important to be tasked to others outside our confession or even to those untrained and unauthorized for this ministry.

As Lutherans we believe the Word of God is God's voice at work among us.  This does not merely apply to the readings from Scripture but to the entire liturgy and especially to the sermon within that liturgy.  Preaching is not some small thing but, on a practical level, the place where we encounter the majority of our people. In the ordination and installation rites of our agendas, we highlight this sacred and solemn responsibility assigned to those set apart by Word and prayer for this particular task.  We cannot treat casually what God has made profound.  Preaching is not something that happens in a neutral place but is the fruit of a real relationship.  Even when a guest preacher comes to our congregations, that preacher comes as one from among us, whose confession is our confession, and who is under the same authority and responsibility to preach faithfully and truthfully what God has said and done in Christ.

We are risking much by treating preaching as a small thing -- whether by those ordinarily assigned this responsibility or by those who might occasionally enter our pulpits.  The problems we have today of doctrinal ambiguity and the failure of confessional integrity are in some great measure the fruits of our indifference to and casual treatment of the preaching task.  It is not only who preaches but what they preach that we must take care to consider well.  It is for this reason alone, no one outside our confession should preach to our people and we should not presume to preach in other congregations.  We require of vicars and deacons who preach that their sermons be reviewed before they are preached.  This is not an academic exercise but a consequence of understanding the sermon as the voice of God and the preacher as an agent of the Lord's own speaking.  God's people deserve at least this.  So when someone outside our confession preaches, we give them access to our people and give them the credibility of our pulpit and it either says to them that preaching is not that big a deal or it says to them that the differences between us do not matter.

Again, I am addressing what happens on Sunday morning and not the occasional opportunities that may not at all relate to worship.  We do preach to the world but that preaching is evangelistic and not within the context of worship.  What Pope Francis did and the archbishop in his story is not ecumenism at all but a betrayal of the trust and authority given specifically to those who speak to us in Christ's name of all that He has done.
Posted by Pastor Peters at 6:00 AM

Pr. Peters, the more I read your blog, the more I am convinced just how much of an idol you Lutherans make of the sermon. The Sermon is NOT the liturgy, the re-presentation of Christ's sacrifice on the cross and Resurrection revealed to us. The sermon is important, undoubtedly, but not to the degree you think it should be.

Ironic to see accusations that we are making the Word to be an idol...

Unknown is right; it's called bibliolatry. The Church from its inception was never bible, faith alone. That concecpt espoused by Luther was novel and heretical.

You don't understand Luther or the Fathers...

Well of course you would say that but seeing that Luther came 1517 years after, I am confident that what was the norm before Luther is what the true faith, undersanding and praxis of the Church was and is to this day. Luther thought he knew better than the forbearers of the Faith which is the epitome of hubris.

How am I to understand the Roman Catholic church as being superior to confessional Lutheranism when a pro-homosexual service is sanctioned in the most important Roman Catholic cathedral in Austria:

It's not hard to understand why you can't understand why the Catholic Church with all of her members both sinners and saints is superior to confessional Lutheranism. After all, Christ did not intend for a Church of saints only but sinners and saints to exist side by side until the consummation of the world. After all, did our Lord not say, "I did not come to call the righteous to repentance but sinners?"

A centralized, top-down organization such as Rome should be able to resolve its issues quickly.

This event is celebrating its 2nd year:


Just like the Anglican Communion, anything goes in the RCC! However, at least the Anglicans are honest about their stance on sexual issues.

Just like the Anglican Communion, anything goes in the RCC! However, at least the Anglicans are honest about their stance on sexual issues.

You mean the Anglicans are proud to be heretics not honest. And for those RCC's for whom anything goes, they are not Catholic but more like Luther, a morbidly scrupulous individual who changed what he in his own personal opinion didn't like and thought was wrong because of his scrupulosity. But in Luther's defense he had a clear sense of God unlike the Anglicans and RCC's for whom everything and anything goes.