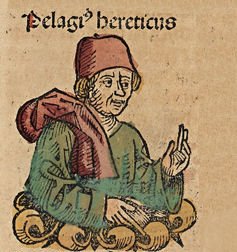 Congress shall make no laws respecting an establishment of religion, or prohibiting the free exercise thereof; or abridging the freedom of speech, or of the press; or the right of the people peaceably to assemble, and to petition the government for a redress of grievances.  That is what it says.  Though there have been those who have been working for some time to prevent Christianity from having a favored place among the religions that mark America's past and people, the judicial branch has been establishing a religion.  This religion is marked by one basic doctrine, liberty, and has come to mean liberty in its most radical form and shape.  Written by then Justice Anthony Kennedy, in a case called Casey v. Planned Parenthood of Southeastern Pennsylvania, in 1992, the court found: “At the heart of liberty is the right to define one’s own concept of existence, of meaning, of the universe, and of the mystery of human life.”

So it has come to be that despite a prohibition against Congress enacting laws to establish one religion or prevent the free exercise thereof, the SCOTUS has been slowly working on the definition of a new religion of radical individualism and radical freedom -- one that the founders would not recognize and one that is alien to both the Constitution of the US and to the freedoms this constitution was established to protect and preserve.

You can read it all here.  In a fine piece of writing, the Junior Senator from Missouri has detailed the establishment of Pelagianism as the new religion of America. In case that is not enough to whet your appetite, then read below:

Pelagius held that the individual possessed a powerful capacity for achievement. In fact, Pelagius believed individuals could achieve their own salvation. It was just a matter of them living up to the perfection of which they were inherently capable. As Pelagius himself put it, “Since perfection is possible for man, it is obligatory.” The key was will and effort. If individuals worked hard enough and deployed their talents wisely enough, they could indeed be perfect.
This idea famously drew the ire of Augustine of Hippo, better known as Saint Augustine, who responded that we humans are not achievement machines. We are fragile. We are fallible. We suffer weakness and need. And we all stand in need of God’s grace.
But Pelagius was not satisfied. He took his stand on an idea of human freedom. He responded that God gave individuals free choice. And he insisted that this free choice was more powerful than any limitation Augustine identified. . . .Pelagius said that individuals could use their free choice to adopt their own purposes, to fix their own destinies—to create themselves, if you like. That’s why a disciple of Pelagius named Julian of Eclanum said freedom of choice is that by which man is “emancipated from God.”. . . .
Perhaps the most eloquent contemporary statement of Pelagian freedom appears in an opinion from the United States Supreme Court, in a passage written by former Justice Anthony Kennedy. In 1992, in a case called Casey v. Planned Parenthood of Southeastern Pennsylvania, he wrote this: “At the heart of liberty is the right to define one’s own concept of existence, of meaning, of the universe, and of the mystery of human life.”
It’s the Pelagian vision. Liberty is the right to choose your own meaning, define your own values, emancipate yourself from God by creating your own self. Indeed, this notion of freedom says you can emancipate yourself not just from God but from society, family, and tradition.
The Pelagian view says the individual is most free when he is most alone, able to choose his own way without interference. Family and tradition, neighborhood and church—these things get in the way of uninhibited free choice. And this Pelagian idea of freedom is one our cultural leaders have embraced for decades now.
But here’s the paradox. For all the big talk about individual freedom, Pelagian philosophy has made American society more hierarchical, and it has made it more elitist.
This is no accident. Pelagius himself was most popular with the old senatorial families of Rome—the wealthy, the well-connected. The aristocrats. They were his patrons. And why? He validated their privilege and their power.
Because if freedom means choice among options, then the people with the most choices are the most free. And that means the rich. And if salvation is about achievement, then those with the most accolades are righteous, and that means the elite and the strong. A Pelagian society is one that celebrates the wealthy, prioritizes the powerful, rewards the privileged. And for too long now, that has described modern America.

There are so many types of essays; it can be hard to know where to start. History papers aren’t just limited to history classes. These tasks can be assigned to examine any important historical event or a person. While they’re more common in history classes, you can find this type of assignment in sociology or political science course syllabus, or just get a history essay task for your scholarship.

What is a political essay? A political is just as the name suggests an essay based on politics or a political situation. Completing a political essay is impossible without the proper research to fully understand your subject. First, you should study the primary texts, to analyze its contents. You may take advantage of using reliable Internet sources, with available government reports and political parties' news. Scan through reputable newspapers and magazines to compile relevant data for your political essay. Find more political essay at African Slave Trade Essay

Your picture is of Pope Pelagius II who is not to be confused with the heresiarch.

I might add that the most prevalent heresy working in our modern society I in fact Gnosticism.