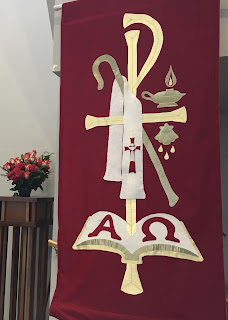 I still recall when a young man asked to shadow me through teaching catechism class and then would sit afterwards with long, in depth questions.  I recall the conversations about discerning vocation and about the core identity of Lutheranism.  I watched him serve as assisting minister (diaconal role) for the liturgy.  I read some of his first sermons.  I waved good bye as he headed to seminary.  I preached and presided at his wedding.  I rejoiced with him over the birth of his daughter.  And now I will be granted the privilege of preaching at his ordination tonight.

It is a great privilege to be involved in a person's life while discerning and choosing a vocation.  My wife long had the privilege of mentoring and precepting young nurses during their Critical Care rotation.  She has great stories of watching them grow and flower.  Some of them remain close to her years later.

Sadly, as a pastor this story has not been replicated often enough.  Young men face daunting challenges on their path to ordination.  Not in the least of which is the fact that the cost of education is high and the compensation is not great.  Included in that are parents and friends who often discourage those young men who have the beginnings of an interest in the pastoral ministry.  Lastly, we live at a time when people do not value church, the pastoral office, or any vocation of service as highly as they ought.  Talk to my daughter-in-law about the compensation for those who work in the mental health field!  Yet it is wonderful when someone perseveres through the mine fields positioned against such servant vocations and especially wonderful when you are able to see someone get to the day when by Word and prayer the Church will set them apart for the pastoral office.

This is not the end of a journey, by any means, but it is the significant completion of one of the most important steps.  Soon he will head to Michigan to settle into a dual parish and see what was missing in his formation as pastor.  We all do.  We find out too quickly what we do not know and we find out too late what should know from the beginning.  I presume it is that way for most vocations.  It was for me.  I suspect it will be for him as well.

But it is a time of great joy within our congregation, within his family, within my own family, within the congregations where he will serve, and throughout the the wider church landscape during this summer season of ordinations.  Pray for those young men who are now just discerning their vocation.  Pray for those in college in preparation for seminary and those in seminary.  Pray for the vicar who is learning by watching and doing.  Pray for those who on bended knees will have hands laid upon them and a stole placed around their necks to rise up a servant of God for our benefit.  And pray for more them all along the way!
Posted by Pastor Peters at 6:00 AM

1 God of the prophets! Bless the prophets' sons;
Elijah's mantle o'er Elisha cast;
each age its solemn task may claim but once;
make each one nobler, stronger than the last.

2 Anoint them prophets! Make their ears attent
to thy divinest speech, their hearts awake
to human need; their lips make eloquent
to gird the right and ev'ry evil break.

3 Anoint them priests! Strong intercessors, Lord!
Anoint them with the Spirit of thy Son;
theirs not a jeweled crown, a blood-stained sword;
theirs, by sweet love, for Christ a kingdom won.

4 Make them apostles! Heralds of thy cross.
Forth may they go to tell all realms thy grace;
inspired of thee, may they count all but loss,
and stand at last with joy before thy face.