Why I am opposed to prayer in public schools. . . 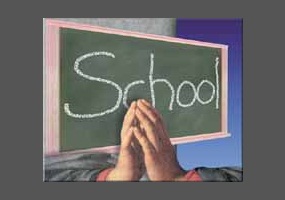 For a very long time, for too long, those in charge of public education in America, on every level, have been among the most progressive and liberal of our people.  It has hit the agendas of schools (where now they teach sexual preference, gender choice, and the freedom to do with the child in the womb as if it were waste from the body).  It has hit the curriculum (where factual history is being supplemented or replaced with social conscience history, a sort of affirmative action account of our past complete with dutiful attention to the oppression by whites).  It has hit the sports programs (where biology has been replaced by gender preference on the track and on the field).  It has hit the ordinary and practical stuff of the schools (where restrooms must now be open to whoever identifies as whatever).

Those who would pray in public schools do not see prayer as the pious conversation of the faithful to God but as a cultural reflection not much different than cuisine or dress.  They want our kids to pray but not to God -- rather, they want our kids to pray so that they can understand, appreciate, identify with, and celebrate diversity.  It is a mockery of prayer.  It is play acting religion for the sake of cultural diversity and nothing more.  I do not know about you, but this is not what I want for my family.  I fear that the schools will do an effective job of teaching the children that there is no difference in the pantheon of deities that people have worshiped, that religion is merely about myth and legend, and that the purpose of religion is cultural and not salvific.

California's public schools is looking at a “model curriculum” for ethnic studies being proposed in which students chant the names of Aztec gods, along with positive thinking mantras.  In other words, they pray to Aztec gods.

But that is California, you say.  Guess what?  I am from that bastion of conservative common sense people called Nebraska but they are thinking of having kindergartners taught alternative family structures, talk about gender identity, differentiating birth and biology from gender preference, and other things that fully identify with and reflect the liberal agenda for indoctrinating our children at the youngest age.  There is no not in my back yard anymore.  If they teach these things, the prayers they will pray with our children will reflect these values and not honor the Christian God.  Even in Nebraska.

So don't expect me to encourage prayer in public schools.  Prayer is being used as a tool for ends that conflict with Christian faith.  It is time that we got over the idea that putting prayer back in public schools will help the cause of the faith.  It will certainly change things but not a change Christians want or welcome.  So count me out of that argument.

Even in communities where these things have not yet taken root, we have to admit that the educational enterprise in America is being used as a tool by the powerful forces of social change and cultural transformation and Christianity and Christians are the pawns in this struggle.  We must not play the game.  Let the faith be taught in the home and in the Church.  Let parents discover what is being taught and work to counter the one-sided view of things that our educational system is providing.  Let us stop toying with and experimenting on our children.

Honestly, there was a time when I did not really get the attraction of home schooling.  Part of it was that I did not want to do the work.  But I get it now.  The future of education in America ought to scare us.  From the morality being taught to the worldview being imparted to the sexual and family choices being encouraged to the selective view of history being taught to the sanitized atmosphere being shown to our kids.  It is a moment of decision for parents, school boards, and teachers in America.

The childless always have an opinion about child-rearing, so I will give mine. I believe I am right. Homeschooling is the best option for the Christian (and probably other religions) in a time when parochial schools are likely to be shut down in the not-too-distant future, due to monetary issues, and governmental control.

I am tired of the trite complaints about indoctrination (teaching=doctrine). What do we think the public schools and higher education have been doing all these years? Maybe if some had paid attention to what was being taught, we might not be in danger of being cancelled to use an overused verb. It is the Christian’s responsibility to indoctrinate into the faith.

I know very well I have failed in not having children (thankfully I am forgiven), but I believe I am observant enough to know that prayer belongs in the Church, the home, and our minds. When Christians were refused the right to pray and worship in public in the early centuries, they didn’t whine and complain of a government gone wrong, they kept on praying, in other venues, whether underground or in homes. We could take a lesson from Europe and the Chinese churches in being inventive with the when and where, not the how or why.