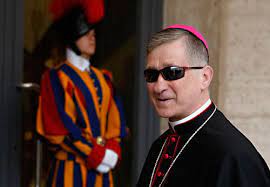 News from Chicago is grim.  While the Chicago Archdiocese had 2,400 priests in 1975, including Diocesan, religious order and retired priests; today there are 1,200.  In terms of parishes, just four years ago there were 344 in the Chicago Archdiocese. Under Cardinal Cupich, the Archdiocese has wonderful news.  On July 1, 2022, there will likely be 221 parishes -- the loss of 123 churches.  At least 57 churches across the archdiocese will no longer be used for Mass and so their buildings will be closed, sold, or repurposed.  Others will be yoked together into a parish that includes several facilities or sites where Mass is offered.  Although this reduction has been in the planning stages for some time, the pandemic only hastened and expanded the overhaul.  After all, Mass attendance had been falling long before the impact of COVID on the dismal statistics.  A couple of other things to consider.  The Chicago Archdiocese was one of the last hold outs for masked students in their parochial schools and Cardinal Cupich has been quicker and tougher than most bishops in clamping down against the Latin Mass.  At the same time, the Cardinal made waves by performing a Chinese pagan ceremony at Mass and tolerates the abuse of the Novus Ordo by some priests, such as Father Michael Pfleger, and seems friendlier than most Roman Catholic bishops to the LGBTQ cause.

Is there a lesson here for Lutherans?  I think there is.  The road to renewal does not lead to an embrace of the prevailing move of culture or society.  It leads through orthodoxy in doctrine and in practice.  The future of the churches is dim if all we can do is offer the world a faint echo to what they already think or feel.  There will be no blessing from God upon such distortion of the Scriptures or betrayal of the authentic Gospel of Jesus Christ crucified and risen.  In some respects, we have suffered greatly under the same temptation.  When you lose faith in God to keep His promise and work through the means of grace, you are left with a conundrum.  If God is not going to build His Church in a way that satisfies you, then you must build His Church for Him.  Or, simply do what God has called you to do and trust that He will make sure that the Word does not return to Him empty.  It seems that many are not quite willing to let God be God of His Church and so they have taken in hand the work of the Kingdom, dismissing faithfulness to Scripture and Confession in favor of a faithfulness to an image or idea -- the welcoming church.

Growing up as a child in the 1950s, it was inconceivable to me that the Church would be in such a state today.  Rome was monolithic and unbending.  Parishes were full.  But the little breathe of spring that John XXIII brought, turned out to the cold wind of winter in the hands of Paul VI.  Lutherans were also enjoying rapid growth.  We knew who we were, what we believed, and how we worshiped.  People responded.  There was a Bible institute for the laity every year and my parents dropped everything to listen to the pastors of the Circuit.  Catechism classes were full -- like Sunday school.  Seminaries were also full.  The liturgy, though not the hymnal, was pretty much the same wherever you went in Lutheranism.  And then the bottom dropped out when we thought it was time to get with the times.  While an embrace of avenues to proclaim the Gospel is never bad, the Word of the Lord cannot be changed or adapted or the faith modernized without losing the Gospel itself.  The changeless Christ for a changing world has become a Christ changing to keep up with a changing world.  The only changeless thing around us is the primacy of the individual and the individual's feelings and perception.

Most of our whole districts are much smaller than the Archdiocese of Chicago and we do not have a clergy shortage like Rome does but we may be in the same boat of closing down parishes because they have no people.  If we have done all we could in faithfulness to Christ, His Word and His Sacraments, then closing them down is what we have to do.  But if we are closing down parishes because we have been unfaithful to the unchanging Christ and His means of grace, then it is high time that we made the mea culpa and repented with the promise to amend our sinful ways.  God's forgiveness is never in doubt but our faithfulness as a Church has not exactly been certain.

Update. . . Cincinnati is not far behind. . . the Bishop announced plans to reduce the number of parishes in this 450K size diocese:  210 down to 57.  They must be doing something right.  Huh?