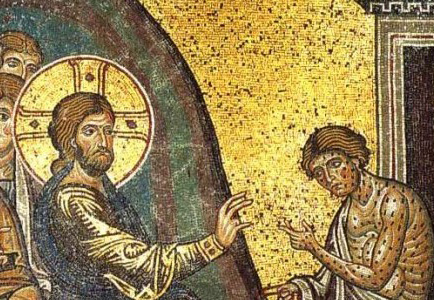 Though we are loath to admit it,, the pandemic revealed the weakness of the Church at the very moment when the world was looking for strength.  Instead of courage, the Church showed herself the coward -- not by masking up or distancing in the pews or closing the doors to satisfy the government.  No, the cowardice was mostly about how we treated the threat.  The virus was not some airborne demon hidden to the eye, it came to us from people.  By agreeing that people were the problem and acceding to the isolation a frantic government imposed upon us, we forgot the example of Jesus.  Not only did He meet sinners in their homes and eat with them, He touched the untouchables.  He touched the leper, the woman unclean with the flow of blood, the Gentile, the Samaritan, and everyone else that the religious authorities walked across the road to pass by on the other side.  That is our greatest failure and I fear it will haunt us for a very long time.

It was two years ago that we faced an Easter here with a dozen or more Eucharists of ten, spread from 7 am into the mid-afternoon, simultaneously holding services in the chapel and in the nave.  My associate at one altar and me at the other, our cantor ran from place to place so that at least a hymn might be sung on the Feast of our Lord's Resurrection.  Though it seems now like a fairy tale memory, it was real.  Police cars sat in our parking lot watching who walked in and who walked out.  They just sat there -- I am sure that none of them wanted to be there or to do anything if the magic limit of ten souls had been exceeded.  It went only like that for weeks until we could stand it no more.  Slowly the number of services decreased and the numbers in each sanctuary increased.  It was still laughable.  Ten, then twenty-five, then forty in a space that seats four hundred and ten, then twenty-five, in a space that seats 80-90.  Some of my colleagues called me foolish and some parishioners insisted we were taking risks with people's lives.  Of course we were.  We were foolish and it was risky but life is filled with the foolish things of God in the face of worldly wisdom and with risk greater than COVID could ever threaten us.

My associate and I did not know what we were doing.  We just did what the Church had always done in the face of threat, in the midst of fear, and against all odds.  We confessed our sin, heard the Word, preached the Gospel, administered the body and blood of Jesus, and sent God's people forth with the blessing of God upon them.  The people did not know what they were doing.  But they came.  Individuals and families who needed to hear the Word of God and feast upon the bread of heaven, the cup of salvation, and the medicine of immortality.  Like lepers they came to Jesus with their hurt, their anxious hearts, their uncertain futures and Jesus came to them as He always comes -- in the splash of baptismal water, the voice of absolution, the preaching of the Word of Life, and the body and blood hidden in bread and wine.  We did see what we were doing as profound.  It all seemed rather ordinary -- as ordinary as it can get in a nation locked down by fear, isolated from the people nearest and dearest to them, worried that a step too close would snuff out their lives to a threat no one could see or tame.

It was not the first time that an empire was threatened by plague or Christianity tested against the backdrop of affliction.  But the Church in earlier pandemics fared better than it did over the last couple of years.  Instead of shining brightly with the Light of Christ, we tended to hide in the shadows of our fears.  Instead of venturing out with hope, we admitted that the worst that could happen to us was death.  All of this was in the shadow of the annual celebration of Christ's triumph over death and His resurrection promise that we too would be raised from death to life, from this body decayed to a glorious body that was eternal, from this world winding down to a new heaven and a new earth to last forever.  Jesus touched the lepers and we hid not only from them but from everyone -- fearing that anyone could be that leper and without the courage to confess that Christ is Lord in the midst of pandemic.

In earlier ages, the Church's witness during time of threat caused a surge in conversions.  People watching for hope saw it in the Church and seeing that hope, they begged to own it.  The spread of Christianity in our earliest days was done under varying threats from despotic governments and unfriendly populations but they could not stop the growth of Christianity until all the shores of the Mediterranean confessed Jesus as Lord.  The pandemics continued to come and the Church did not run away from the wounded or the fearful.  Even Luther paused the Reformation to stand, kneel, and pray with the afflicted.  But that did not happen in 2020 or 2021 and probably will not happen in 2022.

My friends, we cannot afford to be tentative or surrender to the power of fear to keep us from touching the leper.  In Mere Christianity C. S. Lewis wrote something more apropos to this moment than to any other: "If you read history you will find that the Christians who did most for the present world were precisely those who thought most of the next. It is since Christians have largely ceased to think of the other world that they have become so ineffective in this."  That is our power.  We are free from the fear of death because we know we have everlasting life and this freedom translates into the courage to love the unlovable, touch the afflicted, greet the leper, and manifest the hope and love of Christ.  We may have forgotten this when we needed to remember this most.  But there is time to remember and to recommit ourselves to be Christ to the world -- to those who have only fear, only threat, only death.