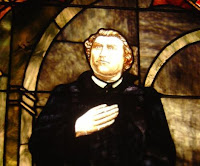 One of the things I soon discovered after moving to the South, to a community with barely one Lutheran congregation, is a dismal lack of history when it comes to fundamentalist and evangelical Christians. The other thing I learned is a fundamental misunderstanding of Lutherans. [I do not mean to suggest that things are that much better in other parts of the country.]

From my friends in the fundamentalist and evangelical churches, I discovered that Luther is for them more of a freedom fighter than reformer. A reformer is more concerned with what is retained than what is discarded. These folks are more concerned with what is discarded from the catholic tradition (the Mass, creeds, sacraments, etc.) than what is retained. So there is an inherent suspicion of Lutherans and what they see, anyway, as a disconnect between the Luther they think they know and the Lutherans whom they see in Church on Sunday morning.

I too believe there is a disconnect -- out of our fear of being labeled Catholic and perception of the anti-catholic sentiment of the US (especially in the South), we Lutherans are not as catholic in practice and identity as our Confessions are. The fundamentalist and evangelical Christians would say just the opposite -- what goes on in Lutheran churches on Sunday morning is way too catholic.

Luther was himself a very catholic evangelical and that is exactly the description of the Confessions of the Evangelical Lutheran Church -- they are catholic and evangelical in the best sense of those terms. We are in this respect not Protestant at all, perhaps best a via media -- a path between -- the Roman Church and what began as Protestantism (but has certainly moved well beyond its 16th century forms).

And there is the next point. Lutherans are identified more by Luther and everything he said or wrote (and he said and wrote some outlandish things) and less by their Confessions. This is just plain wrong. The only writings of Luther that we are bound to are the Small and Large Catechisms and the Smalcald Articles. The rest of our Confessions were written by others, primarily Philip Melancthon.

Our Lutheran identity is almost cultish to those confused by our name. We are called Lutheran but we are not a cult of Luther, slavish followers of Luther, nor do we hold Luther to be the saint of saints (the Virgin Mary holds that place according to our Confessions). We honor Luther as a doctor of the Church, defender of the faith, and renewer of the Church. We value his contributions to the teaching of the faith (many volumes of noble and great works) but what governs our faith and identity are not the words of Luther but the words of the Confessions (sometimes called Symbols) of the Lutheran Church as contained in the Book of Concord (1580).

Sadly, even Lutherans are confused by all of this. Which points us perhaps to where we need to begin... re-educating ourselves so that we might re-educate those around us... as to who we are, what we believe, teach, and confess, and Luther's place in all of this... You may be hearing some more about this...
Posted by Pastor Peters at 6:22 AM

Amen! "Back to the Symbols!" Years ago I wrote a little piece on You Might be a Quia If...

I was raised in the LCMS in the north but have lived in the south for over 18 years. I have attended a Southern Baptist church for over 5 years now but am unable to join due to my LCMS roots.

You are so correct about many evangelicals having little knowledge of early church history. It's as if church history starts in the 1800s. Likewise, there is a bias against anything Roman Catholic (i.e., honoring the Virgin Mary, the display of a crucifix, the wearing of vestments). I do think it's part of southern culture. I am not an apologist for the Catholic church, but I often challenge and correct many of my Baptist Christian friends when they falsely criticize the Catholic church. If one is going to criticize the Catholic church (or any denomination for that matter) at least be accurate.

And you are correct, Luther did not believe in the separation of church and state or the right of everyone's own personal Biblical interpretation. Those concepts are clearly stated in the Southern Baptist Faith and Message (their statement of beliefs).

Sadly, as someone raised in the Lutheran church, I had little or no knowledge of the Book of Concord. (I was well taught in Luther's Small Cathecism.) I purchased a copy of the BOC ~6 months ago. Wow! I have some learning to do. And I thought I knew what Lutheran's believed. My guess is there are many Lutherans who know little about the Book of Concord.

I have enjoyed your blog. It's a pleasure to get the thoughts and insights of a Lutheran pastor in the south. Thanks and God's blessings.

I am heartened by the renewed interest in the BOC. I gave my father the readers edition Paul McCain put out from CPH and he has read it daily as part of his devotion. He loves it.