Don't You Just Hate It When... 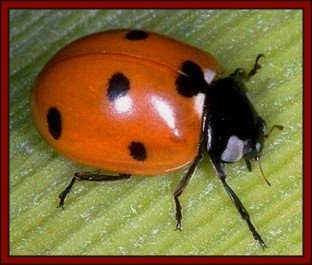 I came up  to the altar on Sunday, bowed down and kissed it, went over and opened the missal, and there was a lady bug on the missal.  I gave the little critter a flick with my finger and it popped him straight up in the air.  I guess he was righting himself after being so rudely interrupted when I sucked in a breath with my mouth wide open, just about to intone the Gloria, when I realized that I had actually sucked in the ladybug and swallowed her down.  Needless to say I butchered the beginning of the Gloria and was rescued by the organ and the congregation as they came in on cue.  Meanwhile I laughed hysterically at the altar, with my back to the congregation, thinking to myself "Boy, wouldn't my wife love to know what just happened."  Apparently my laughter was not quite a subtle as I thought and my adult son was the assisting minister and he began to laugh (but he was laughing at my terrible intonation of the Gloria).  He was in the process of gathering his composure when he glanced at my wife, who was also laughing, again at my flawed attempt at musicality when it came to intoning the Gloria.  Well, by the end of the Gloria I had again regained my composure, as had my son, and my wife was well on her way, as well.  Meanwhile I felt a little squeamish at having eaten the innocent bug (or maybe not so innocent since I do not know if the bug had gone to confession or not).  And then I thought about the fact that this meant I had eaten before receiving the Sacrament, something I just about never do, and began to wonder in my mind if this would count at breaking the fast in preparation for the Eucharist.  By the time I got through this it was time for me to intone the salutation and return my mind to the thing at hand...Oooooh what a bad day it started out to be...  Fortunately, second service was uneventful.
Posted by Pastor Peters at 6:31 PM

ROTFLOL! That will learn you for giving the poor bug the finger.

Wow! That is so funny - and I hope it never happens again! I was thinking about the squeamish issue - apparently you are not!

I've had a few battles with bugs at the altar, but have never had one make its way into my mouth. That's classic!

Be jealous for the bug, who got a wine chaser several times in volume to the bug! :)

Don't know how many do, but I do both. Got a problem with either?

A bug, or rather spider, story from the pew. During a sermon on a summer Sunday my family and I noticed a HUGE spider descending from the vaulted ceiling. We watched as the spider came down..stopped..waited and with a new supply of web silk..dropped again...there was pointing and looking and watching, all while the sermon was being preached...the people around soon noticed the spider too...IT WAS HUGE...it was headed for an 80 year old woman's shoulder...it dropped again and again...by the end of the sermon it was almost upon her...what to do, what to do?...I took my bulletin and placed it in the center of my open LSB...when invited to rise for the creed, the spider was in just the right place...I rose, positioned the LSB under the spider...and closed the hymnal...HUGE SPIDER gone...bulletin ruined...silent applause from the last 3 pews...older woman had no idea there was even a spider..God is good.

PRICELESS. I had an acolyte once who had a similar experience with a mouse playing around the base of the pulpit - her eyes were huge. Fortunately the mouse made its exit without meeting the inside of an LSB...

Sorry to turn the discussion to theology, but . . . I remember hearing a similar story from an ex-Catholic acolyte a few months ago on NPR's "Wait Wait Don't Tell Me." Unfortunately, the author got scared he had committed a mortal sin, and then wondered "what kind of a God punishes someone with damnation for an accident?" This was his reason for leaving the church.

I suspect there were other reasons for leaving the church, and this was a good excuse, and a good story to tell on national radio, but still.

And I generally fast - but when I flick bugs away, I generally have my mouth closed in a grimace of terror. I don't like bugs.

Pastors of the Unaltered Augsburg Confession get to kiss the Altar AND their wives! How cool is that? I also am blessed to do both. Great illustration for the need to wash your hands before handling the elements:)

Think of it this way: just a little more protein. That's what I'd tell the visitors to the wardroom whenever we got FFV from foreign sources with, ahem, foreign critters in them.

Good thing you're not Buddhist!

The bug had evidently been present for confession and absolution, so we can assume she was ready....

I didn't see or know about the bug, but did wonder what happened during the gloria as you don't usually have trouble.

Glad it wasn't a church bat.

A few years ago I was doing some pulpit supply at a church in Wisconsin, and for some reason a bunch of Yellow Jackets were stirred up enough to make several laps around the nave and chancel. Having been stung by once, I appreciated the congregation's willingess to stay in their pews--sort of.

.......and in Venezuela snakes (both poisonous and non-p types used to wrap themselves around the stones of the altar......makes for interesting eye (or lip) contact as one kneels to kiss the altar!!