Offering Plates Have Not Been Around Forever 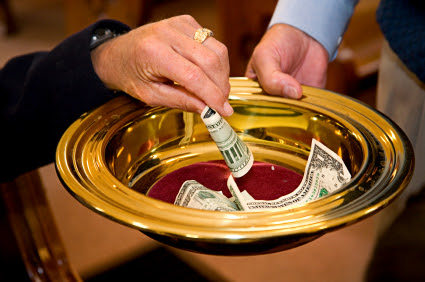 As instrumentalists play or a soloist sings, as ushers file slowly down the aisles, congregants give money as an act of worship and to support the ministry of the church. If the people don't give, then the pastor goes unpaid, the building never gets built, and the missionaries stay home. When Christians go to church, most expect the collection of an offering as much as they expect preaching, singing, and prayer. Unlike preaching, singing, and prayer, however, the weekly offering did not become a fixture in American worship services until the late 19th century.
Colonial American churches did not depend on voluntary, weekly giving from their members. Instead, as had been the case in Europe, the government established churches, sanctioning certain congregations and supporting them financially. Most New England colonies established Congregational churches, while the Southern colonies along with New York, New Jersey, and Maryland established the Anglican Church. Most of the colonies could not imagine a state without an established church. A prosperous society depended on having citizens of good character, and the people expected churches to create virtuous citizens. Since churches served the public good, it made sense to fund them through public taxes and fees—such as poll and property taxes—rather than voluntary offerings.
Public funding of American churches did not cease immediately after the American Revolution. While the Establishment Clause of the First Amendment prohibited Congress from establishing a national church, the states still supported churches through taxes. In the years following the Revolution, men like Thomas Jefferson, James Madison, and John Leland fought against religious establishment in Virginia. Isaac Backus and other Baptist ministers led the charge in New England. Only in 1833, when Massachusetts rescinded its religious tax, was every state church in the Union officially disestablished.
-  You can read the rest of the article HERE. . .
Christianity History offers an interesting review of the offering plate. . .
From then on, churches in America have tried pew rent, pledges, assessments, free-will offerings, tithes, guilt, inspiration, and fund raising to finance the work of the Kingdom.  It is a sorry history of begging in the Name of the Lord and it remains to me one of the saddest things Pastors and congregational leaders must do -- ask people for money.  (Look at the picture... a couple of singles and a fiver... oh, yea, that'll by a lot of ministry!!)
While we assume the offering plate has been around forever, it has not.  Some churches do not have offering plates and do not take time to pass them around on Sunday morning.  They have alms boxes or offering slots and people put their tithes and offerings in them on their way into the sanctuary.  One Roman Catholic congregation was robbed but the thieves did not get the plates -- they do not use them -- the thieves ripped out the alms boxes and offering "kiosks" in the narthex.
The passing of the plate is on the verge of being challenged by "on-line giving" (which you can do here at Grace Lutheran Church by going to this secure web page and supporting God's work in this place from the privacy of your own home -- shameless plug).  This has become not an option but a necessity as more and more folks use debit cards or credit cards only and neither carry cash nor write out paper checks anymore.
One of the great things about Constantine and the status of "official religion of the empire" that followed was that he and his successors opened the treasury of the empire (and their own personal wealth) to support the Church and her work (it was never fully supported only by the Sunday offering).  Since we don't have a monarchy and since our version of nobility (the politically elite, media stars, landed gentry, and successful entrepreneurs) are not so generous (take a gander at how little Obama gives to "charity" while protesting his critics who wonder if he is Christian).
I for one wish we would go back to the tax.  That is how the tithe started out -- a God tax.  Look it up in the Old Testament.  So far as I know, Jesus never said, "Okay, now that I am here lets ditch that awful temple tax."  Instead He said, "Render unto Caesar the things that are Caesar's and unto God the things that are God's."  St. Paul told us all that "God loveth a cheerful giver" but apparently giving is not done very cheerfully by the majority of folks in any given congregation since the IRS tells us the average family gives annually a paltry percentage of income (after taxes) somewhere around 2%.  So I vote the God tax -- no more fund raising appeals, no more guilt sessions when we don't meet the budget, no more offering envelopes, no more uncomfortable emergency calls for cash, and no more embarrassing bulletin blurbs that say how little was given last week and how much we are behind our budget... and we get to save the time it takes to pass around those plates, solemnly bring them forward, and sing about how much we really love to give (and would if we only had extra money)...
I feel better now...  I am going to sit down and write out a great stewardship sermon!!
Posted by Pastor Peters at 8:31 AM

Some LCMS parishes do not have a
stewardship problem. They have been
taught Biblical stewardship from
their pastors. First-fruit giving
is giving God a generous portion of
our income and paycheck before
we do anything else. After God is
given His share then we pay our bills
and other expenses. In this manner
God does not get the leftovers but
the first portion of our income. Our
motivation is Christ who loved us and gave Himself on the cross for
our salvation and now we out of
love and thanksgiving gratefully
give to Him out of love.

Some parishes do not have a stewardship problem; hmmm does that mean they make their budget and have some leftover or they are ALL giving ALL above the tithe, proportionately, cheerfully, and thankfully? Making budget does not mean we are all giving our all.

Sounds like you're advocating for establishing a new law to be applied to Christians. Surely you jest.
J3

To Anon #2: Mature Christians do not
give to a budget, they give to Christ
and his Church. The parish has the
responsibility to distribute these
sacrificial and generous offerings
in a wise manner. "Making Budget"
is not in the vocabulary of a mature
Christ-centered parish.

The Mormon's have such a tax. Perhaps your idea would be more appropriate if the Church still provided the vast services it used to (particularly during the time of the temple). Now that the government has assumed the primary role for nearly all charitable activities (at the point of a sword no less) it shouldn't be a surprise that people don't have enough funds left to give substantially to the Church. If you want more stewardship, the answer is not another Stewardship sermon pounding a law that may not be applicable to the New Testament Christian but probably a reduction in state intervention into civil affairs.

Unfortunately, as has been reliably reported, man doesn't live by bread alone. The fact that government agencies don't minister to the spiritual needs of the poor means their real poverty is not alleviated rather perpetuated in many cases. So, what appears as charity from the government actually becomes a sort of abuse of the most vulnerable.

Reading 'Pastoral Meanderings' is something that I am resolved to,do at least once a week. this is easy to do because younarecoming across on Flip.

I am not at all happy with your Anonymous commentators. I do not read their comments because they do not ID
themselves.

The Galatians passage is important in the context of your post. Let him who is taught in the Word share every good thing with him whom teaches. Luther's Commentary on Galatians contains some important thoughts on this subject.

Now I remember why I left organized religion to find Jesus. Reading this actually made me sad. The tithe is used as manipulation to pay for buildings and salaries. Faith in Jesus means to believe He paid the cost and fulfilled the law that we could not. You can't earn your way to a blessing no more than we can earn our way to everlasting life. Faith is the key and love changes hearts and brings in His Light.
However, I agree with your Obama statement. : )