The Buzz About the Hand 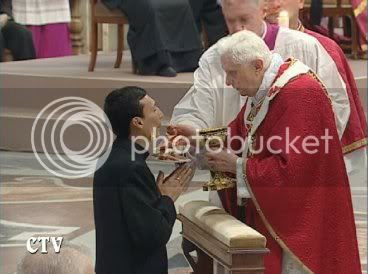 There was, apparently, quite a stir about the change in Vatican practice on Christmas Eve.  No more would the host be distributed in the hand but only in the mouth (actually on the tongue) reverting to the more ancient practice that many thought had been fully lost after Vatican II.  According to the reports, there were actually people turned away who refused to accept the new practice and insisted upon holding out their hands to receive the Body of Christ.  Others held up the host until the communicants got the hint and dodged the ball by dropping the hand and opening the mouth.  Some have trumpeted this new, old practice.  Others lament it.  Still others, among them some Lutherans, wonder what is the big deal?

First of all, permit me a moment to gloat.  I find it utterly hilarious that Lutherans who hate all things Roman Catholic would have so quickly and joyfully adopted this practice from Rome and, especially, since Vatican II.  The same folks who choke on incense, bristle at chant,itch at vestments, gag at genuflecting, and rue ritual have adopted the "new" Roman idea of communion in the hand with nary a second thought.

Second of all, permit a curiosity.  Why is it that some folks who are so keen on not receiving from the chalice because of all those, well, you know, possible germs, choose to receive in their hand?  During the offertory I (the Pastor) go into the Sacristy and wash my hands prior to the distribution.  My hands are clean.  But where have your hands been?  Unless we all take a bathroom break in the liturgy, your hands have shared the piece, rubbed your eyes, turned the pages in the bulletin and hymnal, scratched that itch, dealt with that runny nose, and, perhaps, if you are a mom, done the same thing to all your children.  So, if you are all bent out of shape about being sanitary, why would you choose to receive the host in your hand and then put it in your mouth?  If you were really concerned about this, you would receive in the mouth from the clean hands of the Pastor. Okay, now that I got these two things out of my system, I will go on to more serious fare.


Certainly, the practice of receiving in the hand is not new. In a text of St. Cyril of Jerusalem's fifth Mystagogic Catechesis (21f), which he preached to neophytes in 348 A.D., in which he counsels the faithful to "place your left hand as the throne of your right one, which is to receive the King [in Holy Communion]."  On the other hand, not much later it appears the communion in the mouth has become the norm. Pope St. Leo the Great (440-461) is an early witness of the traditional practice. In his comments on the sixth chapter of St. John's Gospel he speaks of Communion in the mouth as the current usage: "One receives in the mouth what one believes by faith." The Pope does not speak as if he were introducing a novelty, but as if this were a well established thing.
While I do not have a particular issue with communion in the hand, I do prefer a certain decorum -- one that honors the host and cup as the Body and Blood of Christ, as His Word says it is.

And a little decorum for those who receive in the mouth.  Please do not stick out your tongue at the Pastor.  Open the mouth and the Pastor will place the host upon your tongue and lips and you know the rest.  It can be a rather disconcerting thing for a Pastor to look down a long row of communicants -- all with their mouths open and tongues extended.  While on one level I know it is not a statement about either the Communion or me personally, I still don't like to see it...


As I see this has run a little long... we will take up the individual cups and chalice another day. . .
Posted by Pastor Peters at 8:02 AM

Concerning decorum guideline #1, it can colloquially be called "body snatching". I can't take credit for that one.

Also, if you receive the Body of Christ in the hand, do not, after receiving the Host, sweep the crumbs out of your receiving hand with the other hand. Just don't.

I have a niece called Bertha (age 7). Something wrong with that?

There are 3 questions of self-exam
before we partake of Holy Communion.
Am I truly repentant of my sins?
Do I believe Christ died on the
cross to forgive my sins?
With God's help will I amend my
sinful life?

Is it really necessary to have 5
guidelines for proper decorum to
receive the bread? Martin Luther
did not want us to adore the bread
and fall into idolatry.

I noticed rather surprisingly that the new book *Lutheranism 101* doesn't even mention receiving in the mouth as an option. Someone was asleep at the wheel on that one. We have about 1/2 of the folks who still receive in the mouth and I invariably do when I am communing elsewhere.

To receive the bread in the mouth is
part of our Lutheran heritage since
we believe that elements do not
become the body and blood of Christ
until they are consumed by the
communicant. Of course this is
taught in Pieper's Christian Dogmatics to all LCMS seminarians.

While Pieper does not accord the Verba Christi a magical nature to effect Christ's presence apart from the usus of the sacrament, he affirms "the bread and Christ's body are so united in the Lord's Supper that they are received with the mouth in one undivided act..." [II, p. 362]. In order to be received, they must both be present in the distribution. Luther maintains that through Christ's institution a "sacramental union" has come about in the Lord's Supper... He says:'Here two things have become one; I would call that a sacramental union because both are given us... [III, p. 363]. And again, "The Sacrament, instituted by Christ, comes into being not by the sate of the administrant, nor by the faith of the communicants, but by the Word of Christ...which to the end of time experts its power.... solely Christ's word of promise and command causes Christ's body and blood to be present... [III, p. 365]. And "because of His command, that He has enjoined us so to speak and to do, and bound His command and action to our speaking" [III, p. 366]. "not the work of any man produces the true presence of the body and blood of Christ in the Supper, not the merit of the minister nor the eating and drinking or faith of the communicant... but all this should be ascribed alone to the power of Almighty God and the word, institution, and ordination of our Lord Jesus Christ... for the true and almighty words of Jesus Christ which He spake at the first institution were efficacious not only at the first Supper but they endure, are valid, operate, and are still effication so that in all placed where the Supper is celebrated according to the institution of Christ and His words are used, the body and blood of Christ are truly PRESENT, DISTRIBUTED, AND RECEIVED... [III, p. 366]. So Pieper is clearly not a receptionist although some take his words out of context in order to make him sound like one...

I had ann Aunt Bertha.

I also had an Aunt Concordia.