What do we call it? 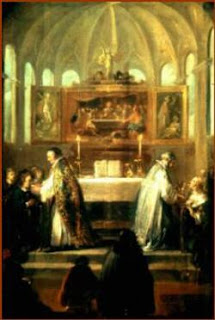 On another forum the question of what we call Sunday morning has provoked some interesting discussion.  Maybe it is worth a moment to reflect upon the various titles accorded that Sunday morning activity.

Historically, the Lutherans called it the Mass (Messe in German).  Luther's liturgical renovations were the Formula Missae (Latin Mass of 1523) and Deutsche Messe (German Mass of 1526).  In our Confessions the word Mass is ordinarily used of Sunday morning and its usage continued unabated in Germany well into the 18th century and still in the Scandinavian churches.  Though there are individual Lutheran parishes where this usage has been revived, the numbers are small and mass has pretty much disappeared from the Lutheran vocabulary.  Even such stalwart orthodox Lutherans as Walther and Pieper acknowledge the term but think that its association with Rome may have made it unusable for Lutherans (at least in America).  In Sweden even the term High Mass continues (Högmässa).

Eucharist or Holy Eucharist is certainly one of the most early terms for the Sunday gathering of God's people around the Word and Table of the Lord.  Eventually this became a more theological term than a practical term of usage to refer to that gathering.  In 1969 the Missouri Synod attempted to revive the term for popular usage when the Worship Supplement introduced Holy Euchairst I, II, & III.  It sparked a mini-revival and it remains a descriptive term of what takes place but not so much a short hand term for Sunday morning.


Holy Communion is another term of description that has a much wider usage.  Among Lutherans it was not uncommon to describe the Morning Service with Holy Communion as in The Lutheran Hyjmnal 1941.  Perhaps this remains the most common usage among the laity.  It is a term with a wider ecumenical usage and congregations from Episcopalian to Methodist to Presbyterian to Disciples of Christ to Baptist can be found regularly using this term.  It is a less popular term among Lutheran Pastors than it is among the laity but it is certainly fully entrenched in Lutheran piety and usage.  LBW used this term to describe the services of this attempt at bringing all Lutherans together in one book (published in 1978).

The Divine Service has a strong German flavor to us (Gottesdienst) but even the Norwegians use it (gudstjeneste).  It has always been a very important term for the period of Lutheran orthodoxy and has become a theological term to describe the difference between worship viewed as man's service to God vs the service of God to us (Sacrament) which is a Lutheran contention.  Introduced in Lutheran Worship, it has become installed as the term of choice for Missouri Lutherans, especially since the introduction of Lutheran Service Book in 2006.  It remains a growing contender to unseat all other terms for Sunday morning -- at least among Lutheran Pastors and especially among those ordained since the 1980s).  The Wisconsin Synod has also used this term in official service books but not the ELCA so its usage there is much more limited. 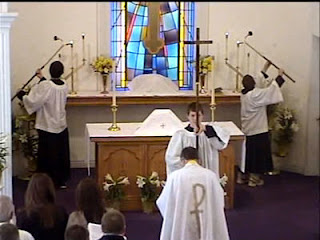 You can also find the generic term Liturgy being used as well as the even more generic term worship or worship service.  While there may be reason to use this for the public advertisement of regular and special services, it is generally not the preferred terminology among Lutheran Pastors and you find them often attempting to teach the people in the pew one of the mother more specific terms (such as Divine Service).

I generally use Divine Service although in preaching I often refer to the Eucharist and I use the term liturgy as the description of the form and pattern of the mass.  In catechesis I use the term mass to connect Lutherans to their heritage and the legacy we claim -- not as a new denomination but as heirs of the one, holy, catholic and apostolic church.  I do find myself resorting to the term worship when speaking to those outside the circle of a sacramental tradition but it is an imprecise term to describe the Divine Service and is useful only for the most introductory level of conversation.
Posted by Pastor Peters at 9:55 AM

Divine Service shows up in Lutheran Worship in 1982, no?

Since most Lutheran churches do not offer the Eucharist every Sunday, it would be improper to call it a Mass or Divine Liturgy. Mass and Liturgy have always implied the consecration and distribution of the Body and Blood of Christ.

According to Genesis 2:3 God blessed
the seventh day and made it holy.
The nomenclature of the Old Test.
makes the Sabbath Day a holy day
set aside for worship. In the New
Test. Sunday replaced Saturday as
the day of worship in order to honor
the Resurrection of our Lord. I like
"Divine Worship" as a term which
focuses on our Lord as the only
object of our worship.

Martin Luther said: "if Adam had not
sinned, he still would have held the
Sabbath sacred. Man was especially
created for the worship of God."
In Worship God gives to us His Word
and Sacrament. However, the Christian
gives to God his hymns of praise,
prayers, offerings, etc. It is
important to remember that we worship
our Lord whether we live on earth or
in heaven. Our heartfelt response of
worship to God for all of his gifts
both spiritual and physical is
still necessary for us.

"Worship" is often what is used in the ELCA, usually with the descriptor "Traditional" or "Contemporary" or other meaningless words. It is very frustrating when away from home and trying to find a congregation because I do not want to know about traditional or contemporary but whether or not Holy Communion is part of the all-encompassing word, "worship".

We returned to weekly Holy Communion about 8 years ago, but it is still difficult to find the right term for the sign. I've tried "Holy Communion", which seemed to be unclear (for reasons I still do not understand) that this was referring to the main worship service. "Service of Holy Communion" will not fit on the sign. Using "Holy Eucharist" mostly got "Huhs?" in response. Mass? I confess I'm not brave enough. So, sadly, the sign still says "Worship". Sorry, Lord, that I have such neurotic struggles simply in naming your great gift of grace and forgiveness.