The Range of the Liturgical Movement 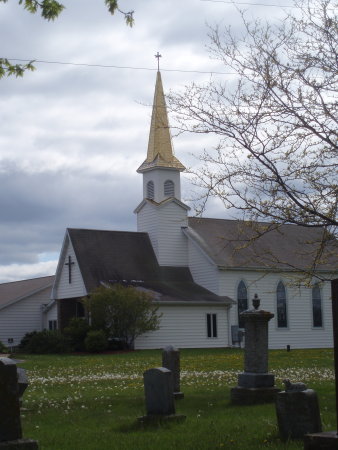 This week something amazing happened.  It took place in a small Lutheran country church.  This congregation has been in the same cornfield since 1896.  Over the door it proudly proclaims the UAC - Unaltered Augsburg Confession (a reference to the adulterated version that was the subject of great controversy in American Lutheranism of the late 1800s).  A relatively few Pastors have served there and the pastorates tend to be long.  Several of the Pastors are buried in the cemetery that is just down from the back of the building.  Many of my own family members on my father's side are buried there.  When the day comes I may be buried there (so says my oldest son, anyway).

This is the congregation where I was baptized and confirmed, the parish that supported me on my path toward ordination.  When I was growing up there, there were no hymnals in the pews.  It was not until the 1970s that hymnals and book racks showed up (a memorial for one of my extended family members).  Prior to that time you brought your hymnal with you to church (a few extras were available for visitors or those who forgot -- but few people forgot).

It was a parish that was sure of its identity -- this was not a mean spirited judgment against other Lutherans but a confidence in the Lutheran Confessions and Biblical infallibility that meant they knew they were different from the Augustana Church in town as well as the scattering of Methodists and Mission Covenant folks who filled out the rest of the religious complexion of the area.  They were identified with the Missouri Synod but never formally joined the Synod until the 1960's.  When the controversies of the early 1970s hit the Synod, there were those who wondered if they had made a hasty decision -- waiting nearly 70 years to make a formal affiliation.

Anyway, to get back to my point, for the first time in its history ashes were distributed on Ash Wednesday.  I called my dad before and afterward just to make sure that the roof did not cave in, the Protestant police did not haul away their Pastor, or the second coming did not happen and I missed it.  Everything went well.  My almost 84 year old dad stood and received ashes on his forehead for the first time in his life and for the first time in the history of that Lutheran congregation.  He knew I had been placing ashes since 1980 and receiving them even earlier and it was always a question of either too catholic or outward sign that was meaningless because God was interested in a contrite heart (like the Gospel for Ash Wednesday had not addressed that).  But now it seemed, well, right.  He was ready, the parish was ready, the Pastor encountered no back lash or any real controversy.

Those who would argue about the reach of the liturgical movement within Lutheranism and within the LCMS in particular, take notice.  It has reached the prairie.  Not as a tsunami wave of destruction but as the rising tide of a liturgical identity that has become more and more intrinsic with the Confessions of the Lutheran Church.  In the early 1970s, I introduced the surplice and the stole.  In the 1980s the alb came.  Then a more frequent reception of the Sacrament of the Altar (from the quarterly observance of my early childhood to monthly, to twice monthly, and now twice monthly plus special days).  I would have never guessed that ashes would be introduced there nor would I have ever thought it would have occurred without conflict.  Such is the reach of the liturgical movement and the reach of liturgical renewal.  It has reached the prairie.

Ashes in and other themselves are merely signs meant to make visible the tension of death and dust and the cross that brings life even to the dead and to the dust.  The point is not ashes but a growing comfort level with who we are liturgically as a reflection of who we are confessionally.  I am not heralding a practice but the reach of a liturgical movement that, at its best, sought to reconnect confession and liturgy, belief and identity in worship.  This is indeed a good thing.  We are not a church body with liturgical canon laws but we do expect that what happens in worship within our parishes flows from our Confessional identity and is not disconnected from that Confession.  So we affirm that doctrinally pure hymnals and agendas be used because what happens in worship either reinforces our confession or contradicts our confession, inhibits our identity and faith or reflects that identity and faith.

I had the privilege of distributing them at the Synod's International Center this year (and I understand they've done it there for a number of years now). Yes, the times they are a changing. From prairie to metropolis, some old prejudices are falling.

This year was the second time out here, down on the southern plains.

"Theology of Worship" got a kick-
start from Vatican II when it
introduced lay lectors, pastor facing
congregation during consecration of
elements, 3 year cycle of pericopes
to name a few. This changes were
adopted by Lutherans. However, the
weekly Eucharist is something that
has been resumed in Lutheran parishes
due to the Confessions.

Every year that I do the imposition of Ashes the more profound the moment becomes. The physical contact with each member that reminds them of their mortality, and the atonement of Christ on the cross is something that I still do not have words for, and perhaps it should remain so. We have a few holdouts who view the imposition as just that, an imposition of Catholicism. I do not wish to create pangs of concience over a rite that is optional, so far no one has refused to attend Ash Wednesday services because of the imposition of ashes.

Our pastor here on the prairie introduced the practice last year and was quite fearful of the potential backlash. None came. This year about 300 members received ashes--all those present, or very close to it. With the imposition of ashes, a choir piece, a children's message, and communion, the service went an hour and a half. The gospel was clearly in evidence, and I am unaware of any complaints about the service. Good Lutheran people, and I thank God for them.

Outstanding article. Thank you for your insightfulness.

Indeed, the Liturgical Movement has reached the prairies, and the urban inner city of the desert Southwest.

Could it be that when we see what is happening in Lutheran congregations, even ones in our own Synod that makes them look and feel rather Baptist or Pentecostal, that our catholic roots don't look quite so bad?