The Cross on My Lapel...

When the Synod logo first came out, I thought, it is not so bad...  After a while I warmed up enough to put one of the lapel pins on my suit jacket.  It looked smart.  It was tasteful in an understated way.  I bought a couple of more.  Some other men in the congregation also began sporting the Synod cross, with its stylized rays of various shades of burgundy or maroon or whatever that color is (colors not being one of my specialties).

That all changed when an infamous Fort Wayne Seminary Professor whose wit is well known and whose acid tongue can take the wind out of anyone's sails, said to me, "So you are a company man now..."  I did not say much in response.  It may have been a joke but it hit me hard.  Later I took off the cross and left it on the sink in the restroom for some other wag to pick up.

For a long time I wore nothing at all... than I decided to wear a crucifix.  The Autom Company had a selection of inexpensive crucifixes suitable for any lapel and I got a dozen of various kinds, put them on the lapels of my jackets hanging in the closet, and went my way.  Later I found a chalice and host, a crucifix similiar to the one John Paul II used, and a cross with a Eucharistic symbol on it -- I am all for diversity you know.  The truth is I have not worn the Synod logo cross since.  It is not that I hate it but the idea of a company man stuck in my craw.  If I am going to be identified as a company man, at least I will make sure it is the right company -- a simple crucifix does it for me.

I am not fond of the liturgical furniture or sacred vessels or pectoral crosses or cufflinks, among other things, that have the Synod logo cross on them.  I absolutely hated the idea that when a District President is elected, Synod bestows upon him a 14k gold or sterling silver version of the company logo.  A cheap lapel pin, well, not so bad, but a giant silver or gold Synod cross hanging from the neck of the DP (or would it be area VP???).  Ugggggghhhhhh....  But there is worse... I cannot abide when congregations have a giant Synod logo cross hanging over the altar -- this is NOT the place for Synod identification.  What should hang over the altar is a crucifix.  It is there that brand loyalties give way to the who and what we preach, teach, and confess -- the exclusive Savior whose inclusive suffering and death have provided forgiveness, life, and salvation not for the few but for the many, indeed, who gave Himself for the life of the world. 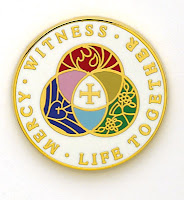 It is not that I am blind to the value of brand identification.  We have used the Synod logo cross on print and other advertising media (Yellow Pages).  I am really quite fond of the new Witness, Mercy, Life Together logo and hope that this becomes a familiar identifier of who we are as Missouri Synod Lutherans.  I just think that the whole thing has gotten carried away.  We do not need to put our corporate logo on the choir robes or chalices or flags (next to the American flag) or the like.  I know it is a nice cross and have seen others outside the Synod use it (without corporate approval, of course).  It just stung me.  What company are you a company man of?????

We in the LCMS are not alone -- you can put the Presbyterian logo cross on nearly anything just as you can the Methodist cross and flame and a host of other logos of which I am unaware.  The point is that the chief symbol of our faith just as the chief article of our preaching, teaching, witness, and confession is Jesus Christ and Him crucified (as St. Paul said).

So I guess I vote simple crucifix... let Christ shine from the lapel of your jacket if you wear one.  It is not to detract from who we are as LCMS folks or what we do as the Lutheran Church-Missouri Synod.  It is just a way to say Jesus Christ and Him crucified, from now until the end of the world.  At least that is how I see it...
Posted by Pastor Peters at 5:51 AM

Dr. David Scaer does not scare
every one. The logo cross you left
in the men's room was a product of
the Ralph Bohlmann era. The new logo
of Matt Harrison era is a political
button like the fish hooks at
the 1969 Denver Convention for
Jacob Preus.

What we need is a cross on the lapel
that simply witnesses to Christ and
not a political party.

"That all changed when an infamous Fort Wayne Seminary Professor whose wit is well known and whose acid tongue can take the wind out of anyone's sails, said to me, "So you are a company man now..." I did not say much in response. It may have been a joke but it hit me hard. Later I took off the cross and left it on the sink in the restroom"

Great article ...Thanks for your great information, the contents are quiet interesting.I will be waiting for your next post.
Lapel pins