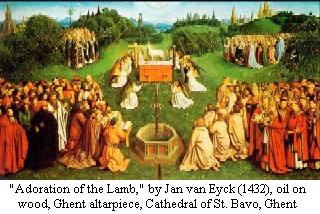 All Souls' Day or its more modern name, the Commemoration of the Faithful Departed, comes on Nov. 2.  In the early days of Christianity the names of the departed brethren were entered in the diptychs. Later, in the sixth century, it was customary in Benedictine monasteries to hold a commemoration of the deceased members at Whitsuntide. In Spain there was such a day on Saturday before Sexagesima or before Pentecost, at the time of St. Isidore (d. 636). In Germany there existed (according to the testimony of Widukind, Abbot of Corvey, c. 980) a time-honoured ceremony of praying to the dead on 1 October. This was accepted and sanctified by the Church. St. Odilo of Cluny (d. 1048) ordered the commemoration of all the faithful departed to be held annually in the monasteries of his congregation. Thence it spread among the other congregations of the Benedictines and among the Carthusians.

Originally saint was a term used to include the entire baptized community of faith, living and departed.  As the Church grew and was no longer the outside in society, the term took on a more narrow meaning -- those within the Christian community whose life, witness, and worship were exemplary.  These were big name saints whose stories were well known and not the more anonymous or ordinary saints.  Early on the Church commemorated martyrs and later non-martyrs were included (7th century) in this All Saints celebration.  In 844 AD Pope Gregory IV moved this from the late Spring (May 13) to November 1. Eventually Pope Sixtus IV (1484) made this a holy day of obligation for the whole church.

The common feast for the faithful departed developed along side All Saints.  All Souls was for the repose of the elect who were still in purgatory.  So those for whom the Church was confident of their purification and participation with the fullness of God's Divine life were separated from those not yet having received this fullness.  All Souls was a general commemoration of all those who died in good standing before the Lord and in His grace and favor but who had not yet completed their final cleansing.  They were still waiting in purgatory for the full and final release of their souls from all mortal ties and afflictions.  Both days were big days upon the church calendar.  This is why Luther posted his 95 Theses on All Hallow's Eve -- so it would be seen by the many folks who made their way into the Church on All Saints' Day.

All Souls was still with us in LW but has disappeared from the calendar in LSB.  After the Reformation this day was off and on included in the Lutheran calendars.  Although both days had histories that required some laundering for the evanglical calendar, I am sad to let go of the Commemoration of the Faithful Departed.  It seems to me that we struggle to connect the ordinary saints from those extraordinary saints whose lives seem, well, larger than life in comparison to our own.  I see the pastoral wisdom in retaining All Souls as a day of remembrance and giving thanks for loved ones who have departed this life in faith and now rest from their labors (without need of purgartorial wait or cleansing).  I think that the average Christian finds it hard to connect Aunt Martha with the blessed apostles, prophets, evangelists, and mighty saints.  Aunt Martha's life may not have been without challenge but she was not beheaded, roasted alive over a pit, crucified upside down... she lived her life in the shadow of the cross -- even all her struggles -- and rejoiced in the way prepared for her in Christ... in whom she died, having fought the good fight.

I know that there are those who will see it differently but I miss the Commemoration of the Faithful Departed, the remembrance of the ordinary unsung saints who were close to us in life and whose lives were images of our own rather ordinary mortal lives.  They are no less saints even thought\ their stories may be rather routine and even mundane.  Remembering them on this day reminds us that death does not break the communion as we say every Sunday in the Preface.

We sing for all the unsung saints,
That countless, nameless throng,
Who kept the faith and passed it on
With hope steadfast and strong
Through all the daily griefs and joys
No chronicles record,
Forgetful of their lack of fame,
But mindful of their Lord.

Though uninscribed with date or place,
With title, rank, or name,
As living stones their stories join
To form a hallowed frame
Around the myst\rquote ry in their midst:
The Lamb once sacrificed,
The Love that wrested life from death,
The wounded, risen Christ.

So we take heart from unknown saints
Bereft of earthly fame,
Those faithful ones who have received
A more enduring name:
For they reveal true blessing comes
When we our pride efface
And offer back our lives to be
The vessels of God's grace.


Almighty God, in whose glorious presence live all who depart in the Lord and before whom all the souls of the faithful who are delivered of the burden of the flesh are in joy and felicity, we give You thanks for all Your loving kindness to all Your servants who have finished their course in faith and now rest from their labors, and we humbly implore Your mercy that we, together with all who have departed in the saving faith, may have our perfect consummation and bliss, both in body and soul, in Your eternal and everlasting glory; through Jesus Christ, our Lord, who lives and reigns with You and the Holy Spirit, one God, now and forever. Amen

Are you bagging me?

The Commemoration of the Faithful Departed IS All Saints Day. The about everything Roman Catholic, the name is a misnomer that completely obscures what is really going on.

That's just flatly bullroar and a denial of the Gospel. If they were washed in the blood of the Lamb, they were saints right here already, as the term originally meant and before it got justification and sanctification confused and rolled up into one, and the departed saints are commemorated collectively on All Saints Day. There is no place for this Purgatory-based anti-Gospel observance in Lutheranism whatever.

BTW, Odilo and the Cluniacs are Benedictine. Nuff said.

Its comforting to see Terry come through for the LCMS that I have come to always expect, even when Pastor Peters seems to be a part of the greater Church.

When then did our Lord say to the repentant thief, "Today thou shalt be with me in Paradise," rather than saying "...with me in Heaven"? Surely Jesus knows the difference!

This day thou shalt be with me in Purgatory? Yeah right.

Um... so... what's the difference between 'paradise' and our understanding of heaven (as opposed to 'the heavens')? Afterlife in the presence of Christ is what we normally term heaven today, or paradise (that's a more old fashioned way of saying it in English).

Also, why does the congregation have a hard time thinking of Aunt Ethel being with the Apostles -- isn't that the point of *All* Saints' day? It's not "Top Tier Saints' Day" It's not "Saints who are Cooler than Your Relatives Day". It's all... its no distinction between Jew and Greek.

But it is easy to see how the ordinary and unsung saints that Pr Peters wrote about get lost in the train of the giants of the faith - from Abraham, Isaac, Jacob, through to NT Peter, Paul, etc. I for one always appreciated the twin days and the remembrance of both, not in competition nor overshadowing one or the other, different days, same remembrance, different saints, same Lord. What is so bad about that? Even in Rome this was about those already destined to heaven but not yet released from purgatorial cleansing. They were still the elect and were not in danger of being lost.

"This day thou shalt be with me in Purgatory? Yeah right."

Ah, Terry, you are so completely reliable! Even when others are willing to consider other possibilities, it is nice to know that the earth still spins on its axis and that you will consider nothing that is not the same, narrow, rigid position of the LCMS from eternity. It gives you that comfortable isolation, even knowing that countless other Christians of good will see things otherwise, believe in good faith and with sound scholarship that there is reason to think otherwise, but you have the comfort of the LCMS NO!! Don't listen, don't think, don't discuss, don't weigh, don't argue and counter argue, simply say NO!!

That was a significant part of why I left the LCMS.

"That was a significant part of why I left the LCMS."

Since it was the "same, narrow, rigid position" of the LCMS that caused you to depart, I hope you found an institution with a "changing, broad, and fluid position" of doctrine and practice. Maybe you should take a peek at Pr. Peters' post on the "Heirs of Luther;" they are pretty broad and fluid.

When I joined LCMS, I did not publicly profess "I will consider other possibilities". I professed faith in the Gospel of Jesus Christ as revealed in Scripture and accurately taught in the Book of Concord especially the Small Catechism. I should hope to be utterly reliable in that, yes.

When I first made that profession in 1996, I was 46 years old with a bleeding doctorate, and just a little listening, thinking, discussing, weighing, arguing and counter-arguing under my belt.

Even when I was of a different belief than I am now, funny how those who take a stand for ANY belief are labelled narrow and rigid. Pig's bum. It may just be that those who actually stand for the various "otherwises" understand each other better than those who stand for nothing but window shopping in the mall of "otherwises".