The unfolding story continues to unfold...

The cathedral in search of a bishop and the bishop in search of a cathedral are ramping up the dollars.... If all goes well, the diocese could go from this cathedral to the familiar image of the one below.... as the house that Schuller built tries to sell itself out of its financial desperation...

A few weeks ago the Diocese of Orange offered to pay $55.4 million for the Crystal Cathedral complex, but it was reported yesterday that it is now willing to offer $57.5 million. Its main rival in the bid to buy the glass mega-church is Orange County's Chapman University, which has only offered $51.5 million. Normally, it would seem bizarre that the Diocese of Orange is upping its bid when its rival is sticking with its lower offer, but it appears that some Protestants connected to the Crystal Cathedral - which, by the way, is neither a cathedral nor made from crystal! - have grave (pun intended) reservations about selling this cherished building to the Catholic Church. It seems that, amongst other things, one of their main fears is that those evangelicals buried in the mega-church's cemetery would turn in their graves if they suddenly found themselves under (quite literally) the Pope's jurisdiction! 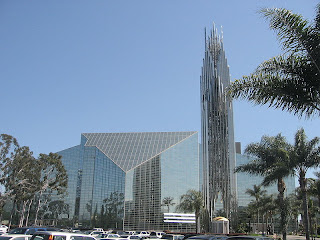 Although the Crystal Cathedral's board is officially happy with both bids (does it have a choice, being bankrupt?), it is also being reported that it prefers the offer from Chapman University, as this would enable the church to eventually repurchase its former building.

The Diocese is desperate to have a central and big-enough cathedral for its people, whilst Chapman University would use the former mega-church as a possible medical school. The former has promised to allow the evangelical group the use of one of its local Catholic churches, whilst the latter has guaranteed that the Crystal Cathedral would remain on is Protestant campus - Chapman was founded by yet another Protestant group, called The Disciples. It is now hoped that Judge Kwan decide which bid is successful sometime soon.
Posted by Pastor Peters at 7:59 AM

Sure glad I don't have a horse in this race.

On the one hand, it would be nice to see the "cathedral" actually be a cathedral if one is going to call it that.

OTOH, I sure as hell would not want my grave to end up under papal jurisdiction. Which reminds me, I think I still own burial plots in a Catholic cemetery from my RC days! Don't live there any more, and I hope by now I'm excommunicated latae sententiae.

Maybe if I amp it up at Past Elder enough it's make them trot out the old bell, book, and candle!

They're complaining when it will still be a Christian church? Be glad they are Episcopalian, where their church might become a mosque!

yet another non-denominational seeker church similar to the ones found here:

If only given those two choices, I think I would choose the Catholic church.

I have been in the Crystal Cathedral
and it would not take that much
remodeling to make it have a real
traditional chancel. The pews and
organ are already in place. The
worship atmosphere for a Word and
Sacrament ministry would be reverent
and great for an LCMS congregation..
..unfortunately the price tag is too
high. Good luck to the Roman
Catholics.

Luck hell. It's $$$. The RCC coughed up an additional 2.1M to top its already top bid. I'm impressed, beats the hell out of the 600K cash coughed up by the RCC here to buy a retirement house in one of our wealthiest neighbourhoods for the outgoing archbishop -- as meanwhile parishes and schools close or consolidate.

Silver and gold have I none, indeed. Good luck Chapman.

Judge just awarded the cathedral to the Roman Catholics. At least a crucifix and an altar will portray the Savior now.

"Judge just awarded the cathedral to the Roman Catholics. At least a crucifix and an altar will portray the Savior now."

Purchasing the Crystal Cathedral was an attractive option for the diocese because it provides an instant solution to its building needs and would cost roughly half the $100 million price tag for the planned Santa Ana cathedral.

The liturgist for the Orange diocese, Monsignor Arthur Holquin, said July 26 that several changes will need to take place in order for the Crystal Cathedral to become a Catholic worship space.

Along with a central altar, a tabernacle and a baptismal font, the building would need a “cathedra” or bishop’s chair. While renovations are needed to the building, “not much deconstruction would be required and the iconic personality of the original architecture and design would, for the most part, be retained,” he said.

And to think that my grandma used to watch Rev. Schuller and the "Hour of Power" on TV and would send him donations so that he could build this cathedral. And it was all for nought. If she could ever find out what was done with her money, she would be rolling in her grave.