The Misunderstood Legacy of Luther 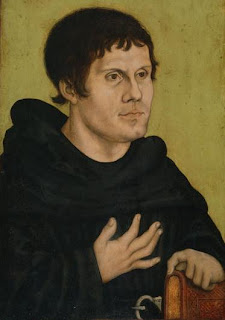 A friend sent me a link to a couple of articles about some Roman priests in Belgium who are calling for a reform the likes of Luther.  Some even call them the Belgian Luthers.  But it is clear that they have no understanding of Luther's reform.  Some of their theses oppose not only Rome but Luther and his legacy.  In the end, even Lutherans often mistake the real point of Luther's reform and turn it in the same sort of general catchall complaint that these Belgians are making.  What this does is both trivialize and distort the real issues between Luther and the Roman hierarchy.  Luther's reform had little to do with anything but the unveiling the Gospel from its obscurity in both teaching and preaching and from the accretions to the Mass which had moved its focus from Sacrament to Sacrifice (and therefore from communion to a spectator activity).

Their manifesto complains about "our church of old men in dresses" and the top down hierarchy with its rules and laws.  But it is clear what they are after is much more.  While we might welcome their call to allow parish leadership be entrusted to trained laypeople it is clear that by trained laypeople they have in mind those who share their same agenda of justice for gay and lesbians and just about every social cause in vogue.  In addition, they have called for Communion services be held even if no priest is available and seem intent upon wading into the morass of modern day Protestantism and Lutheranism in which the distortion of the priesthood of all believers has made everyone a minister of something.  They extend their anti-clericalism call with a demand for laypeople [to] be allowed to preach.  Lutherans technically are adverse to this but in practice the pulpit has been occupied by many with no call or ordination.

My point is this.  Luther was contending not for practices but for the very faith itself.  Luther contended not against the Pope or councils or agendas but for the Gospel.  To see the Reformation through any other lens is to diminish the good work of the Reformers and to make their legacy a rather self-serving movement for prominence and place.  Those who are likened to Luther had better be those who actually content for the faith and not those who happen to have a tiff with their church leaders over things unrelated to or even antithetic to the Gospel of the Crucified and Risen Lord.  Those who compare agitators in the Roman Church to Luther make Luther into a nobody and every kooky cause into a somebody.  Read Luther and you know where he would stand against the social justice agenda or the anarchy of a Church without the Office of the Ministry.  In fact, you only need to see what it was that drove Luther from the house arrest for his protection back into the fray in Wittenberg.  It was that kind of anarchy in which a heady protagonist found no limits to be good limits and tried to steal away the Reformation into a religious Occupy Wall Street movement (with no clear purpose except to complain).

Many of these so called "Luthers" are actually further away from Rome than Luther was.  I have no claim in this debate except to complain when the Reform of Luther -- which was about the doctrine on which the church stands or falls -- is compared to those who clearly have little concern for justification by grace through faith and are driven by the current social justice trends.  Luther was many things -- not all of them good -- but he was not so foolish as to confuse the Gospel with some liberation movement.  In the end, Luther's plea was simply for the Gospel.  If it would be permitted, allowed to be taught and preached, then he was willing to let everything else be -- so confident that the Gospel would work its own house cleaning over time.  So, don't compare every idiotic whiner in Rome with Luther.  It just does not wash!
Posted by Pastor Peters at 6:00 AM

There's just a little more to being Lutheran than breaking with Rome. I did it for 23 years before becoming Lutheran.

The legacy of Luther was getting
us into the Word of God. When he
translated the Bible into German
the laity had an opportunity to read
it for themselves. Today, we have
the opportunity to read it on a daily
basis in the English version of our
choice. Obviously, Luther will be
remembered for his re-discovery of
the gospel message: Christ has saved
us through his death and resurrection
for all who believe in Him.

Have we lost the art of reading what someone writes without deconstructing it and rebuilding it in our own image?

I just buried my mother who had dementia. She could read flawlessly. She just didn't comprehend anything she did read.

Makes me want never to comment again for fear I've done just that. No fear. I'm foolish enough and sinfully proud enough to think I have something to say.