The Sun Never Sets On the British Empire... Or Does It?

I was pointed to an article in the Weekly Standard about the apparent looming resignation of the current Archbishop of Canterbury, Rowan Williams.  It appears his position has become untenable in the delicate and difficult balancing act between the overt and defying actions of the American hierarchy over gay and lesbian marriage and clergy and the conservative and more vibrant Anglican church life in Africa (among other places).

The story here is that there is no story -- nothing we would notice. Perhaps that is symptomatic of a world awash in other urgent problems and issues or perhaps it is testament to the growing marginalism of the Anglican Communion (at least the form in England, Canada, and America).  Either way, it is a sad story.  Williams is not such a bad man -- a literary figure and poet of some renown.  But who can stand in the right place where the tensions between Protestantism and anglo-catholicism, social liberalism and traditional morality, defiance and tradition?  Perhaps this is a job for no one -- except a figure head who can look good in a mozetta, rochet, crozier, and miter.  It might help if one could avoid the embarrassments of friendliness toward sharia law.  It might help if he had a few tricks up his sleeve or there won't be anyone left to marry the heirs to the throne and perform the important civic functions the Archbishop of Canterbury must fulfill. 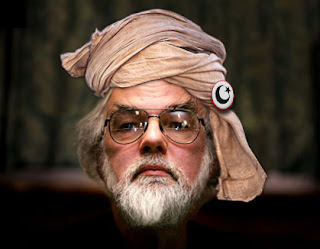 It is a sad story for a church once closely connected to Lutheranism and one that returned the favor by helping us translate liturgical texts into English, one with whom we share a great body of hymnody, and one whose history was marked by missionary endeavor and theological seriousness -- at least until more recent times.  Now it appears left to the Africans to give doctrinal weight and substance to the liturgical tradition that has identified Anglicanism.  Perhaps they can pull it off.  One can only look with sadness on what the Western homes of Anglicanism have become and pray that someone can pull this church body from the abyss of contemporary social justice parading as faith and a morality in which there are no wrongs except intolerance.
Posted by Pastor Peters at 6:00 AM

I am an Anglican myself. The Anglican Mission in America and the Anglican Church in North America are both Orthodox denominations who remain a part of the Anglican Communion. The AMiA is growing by leaps and bounds, as God's Spirit opens doors. Don't close the book on us western Anglicans just yet, God may just have a plan.

Unfortunately, the issue of women
pastors and gay and lesbian pastors
has not been settled by Scriptures
in this church body. Until they
submit to God's Word they will have
turmoil. Just look at the ELCA and
the mess they are in. They have also
failed to submit to God's Word.

The ELCA - endorsement of homosexuality = The LCMC and the NALC.

I would hate to see the Anglican Mission in America and the Anglican Church in North America differ from the rest of the Anglican Communion only in their rejection of homosexuality.

Do both new Anglican groups employ Historical/Higher Criticism of the Bible?

No, the AMiA and ACNA believe in the inerrant word of God, and believe it is our only rule for faith and practice. They take an orthodox stand on crucial issues, while at the same time employing a missional view of our communities.

Welcome to Britain, the most politically correct country on the planet!

"They take an orthodox stand on crucial issues ..." -- NOT

The both make provision for "ordaining women;" so much for their "orthodox stand."

Not all the breakaway Anglican groups support woman's ordination and gay clergy. The Anglican Province of American (APA) and the Anglican Church in America are examples. (I don't know if these two entities are part of the ACNA.) I attended an APA church near my home - very liturgical. Reminded me of my tradional LCMS upbringing. These conservative breakaway Anglican groups seem to have much more in common with confessional Lutheranism than the ELCA and other heretical Lutheran bodies in Europe.

Yes, the Anglican Mission in America does not ordain women, and takes a strong stand against higher criticism and gay/lesbian endorsement. The Anglican Church in North America has some groups within it that ordain women, but as a whole it is mostly against women's ordination.

"The Anglican Church in North America has some groups within it that ordain women, but as a whole it is mostly against women's ordination."

I agree with your last assessment Mr. Tighe. However, a few of these breakaway Anglican groups do not appear to be part of the ACNA, don't ordain woman, don't accept gay clergy, etc. I admire their quest to remain true to Biblical teaching - even if much of world wide Anglicanism is in moral decline. Again, what's happening in Anglicanism seems very analogous to world wide Lutheranism. Those in glass houses shouldn't throw stones.