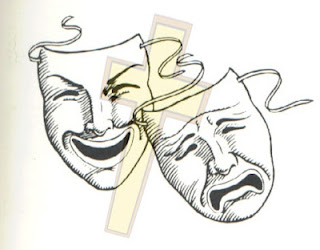 There seems to be no one who does know the story of Peter who, flushed with conviction, insisted he would not deny the Christ though all others might, and then meet the same Peter at the burn barrel where he was recognized only to deny even knowing Jesus.  It is nothing new.  This impulsive Peter goes constantly from bold confession to rebuke for presumption.  Now, following the Easter absolution of Peter in the command of the angel to "go and tell Peter," we find the fisherman with characteristic boldness.  The same impulsive and rash fisherman who denied his Master three times on the eve of the Crucifixion then preaches against those who denied the Lord and crucified Him.

Could it be that Peter forgot that dark night of betrayal and the feeling of those burning tears of regret flowing down his cheeks after the cock crowed (cf. Jn 18:25-27)?  Could it be that Peter, who had recognized and proclaimed before the other disciples that Jesus was the Messiah, the Son of God, and then crumbled in the face of evil and adversity, would hypocritically point his accusing finger at others who also denied Him?

It is unbelievably remarkable how we hear Peter, just a few weeks after all this takes place, preaching to the people, “You denied the Holy and Righteous One and asked that a murderer be released to you.” In the Easter 3 reading from Acts of the Apostles, Peter twice refers to the people’s denial and desired destruction of Jesus, and exhorts them to look anew at the face of the Holy One: “Repent, therefore, and be converted, that your sins may be wiped away.”

But that is precisely the point.  Peter was exactly in their shoes and Peter received the grace of forgiveness to recover his heart from guilt and shame and denial.  Peter speaks not as one who has forgotten but as one who can never forget that denial.  It gives him cause to speak to those who continue in captivity to their own denial, betrayal, and rejection.  That is the Gospel.  The sick who has been healed speaks to the wounded of the healing that is in Christ.  The sinner who has been forgiven speaks to the sinners of the forgiveness that is in Christ.  The dying who sees the long, dark shadow of death speaks to the dying of the life that is in Christ.

Pastors do not preach as those who have grown out of sin and now speak from the moral high ground of holiness.  They speak as fellow sinners standing before the cross seeking the mercy of His promise to other sinners to come and stand with them before the mercy seat.  Pastors do not presume to speak as people who have long ago cast aside their doubts and fears.  No, they speak as those whose fears and doubts have only been met in Christ and bid others so afflicted to trust in the saving wounds and triumphant resurrection of Jesus.

The memory of our failure forgiven and our fallen natures restored is not something we want to escape.  It is precisely this which we want to remember for it is the cause of our joy.  Perhaps those who struggle with Luther's simil justus et peccator can see it so powerfully played out in these post-Easter words of the apostle Peter.  His vivid memory of his own denial and his joyful confidence in Christ's redemption has moved him to speak to those likewise afflicted.  Surely this is the witness which Jesus commends us to give -- the joyous story of the sinner forgiven, the fallen restored, the dying given new life.  It is this which is central in the proclamation of the resurrection -- not a simple or mere historical fact that it is but life that death cannot overcome which calls to the dying, the deniers, the stained, and the wounded.  We have hope and that hope is Christ alone.
Posted by Pastor Peters at 6:00 AM

Pastor Peters,
I've been reading your posts for quite awhile now and I believe this is far and above the best. Thank you.