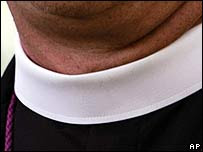 It was more than a generation ago.  I was standing at the counter in the Post Office doing my least favorite postal duty -- bringing in the trays of presorted bulk rate mail to go out at the discount rate for non-profits before a Post Master determined to find something wrong with what we had done.  Anywho, while standing there in line a child from my parish walked in with his mom.  They got the mail out of their box (we all used PO Boxes back then) and they stood in line a few folks behind me.  I watched him tug at his mom's coat until finally she bent low and he whispered something in her ear.  "What did he say?" I asked.  He said, "Mom, there's Jesus!"  It could not have come at a better time.  The Post Master was ready to begin some complaint about our work on the bulk mail and heard the woman repeat what her son has said.  So I turned to her and said, "Well, pretty close."  With that, the business was done and the gruff man at the counter took the monthly newsletters away to disappear for a few weeks before magically showing up in the mailboxes of our members.

When I told that story to another, she said "You didn't!" as if it were naughty joy.  But I did.  And it was not exactly naughty joy (though, truth to be told, there was some of that in it).  Children do see their Pastor's as Jesus.  Perhaps it helped that I had a beard.  Perhaps that made no difference at all.  To this little four year old, I was Jesus.  I was the one whom he saw hold babies in my arms at the baptismal font (for Jesus).  I was the one who preached from the pulpit (for Jesus).  I was the one who handed the host to his mommy and daddy (for Jesus).  It was not that I was the same Jesus whom he heard about in Sunday School (who walked on water 2,000 years ago) but I was still Jesus for him.  That is the nature of the Pastoral Office -- to be Jesus for the people of God.  What that means is that Jesus is the Word that borrows my voice, the baptizeer who borrows my arms, the host who feeds with my hands, etc.  That identification of the Pastor as Jesus is not a bad thing (to a point, of course).

What is sad is when people no longer see Jesus in their Pastors.  I do not mean that they know his weaknesses and failings and no longer believe him to be infallible like the child may (for a brief moment of his life, anyway).  What I mean is when the people begin to see only the hands, only the arms, and hear only the voice and it ends there -- when they fail to see how hidden in the fragile and flawed flesh and blood of that Pastor and his ministry are the means of grace and the work of Christ.  When that happens, everything gets diminished.  The sermon then becomes only one man't opinion or take on things (maybe to be rebutted by another side -- if only to be fair).  The sacraments become merely signs with no power to convey what they signify (comforting ritual without the power to deliever what they sign).  The vestments become all about the Pastor and not about the office of bearing Christ to God's people.

There are those who are happy when such identification of Christ with the Pastor fades.  They have had enough of people and their god complexes -- but that is not what I am talking about.  The Pastor is not God but God is in the Pastor and the ministry he brings of Word, Sacrament, counsel, comfort, admonition, and encouragement (edification is the old word).

The collar helps in this -- both to remind the Pastor it is not about him and to remind the people it is not about him, either.  It is about Christ.  I miss the old days of walking down the halls of the small hospital near my first parish and having folks call out "Hey Pastor (or Father), would you pray for me?"  I miss the warm smiles in the small nursing home when I came to visit and it seemed every wheelchair in the place was lined up for them to see Jesus (to see Jesus in me and my ministry to them of Word and Sacrament).  I miss the people who waved because they saw the collar and, whether or not they knew me, it reminded them of Jesus.  I even miss those who whispered expletives deleted under the breath because of seeing the collar -- for good or ill, they saw that collar and they were reminded of Jesus, perhaps convicted by Christ for something in their past).

I recall once sitting at a table at a wedding reception following the service of marriage at which I had just presided.  My wife was not able to attend and I was there alone, at a table of folks I barely knew (why do they sit a Pastor with all the troubled folks and black sheep of the family???).  Anyway, one guy at the table, perhaps 70 years old, an old German, could barely contain his contempt at me.  Finally he blurted it out.  "Pastors are nothing but g__ d____ blood sucking leeches!!"  The silence at the table was more unbearable than his words.  I choose not to respond but, shortly there after, excused myself and thanked them for their company.  The man was not cursing me.  He did not even know me.  He was cursing God.  We do that sometimes when the hurt becomes too great to bear.  Years passed by and a member asked me to visit her dying sister whom she was caring for (her husband just could not handle it, she said).  You might know where this is going.  When I had the funeral for this woman, I discovered her husband was that man at the wedding reception.  He had refused to ever be there when I came to her but now it all became clear.  He was angry at God for his wife's illness.  Who wouldn't be?  Some days after the funeral he came to seem me at the Church.  He came with tears and anger and the heaviest pain of loss.  He came seeking hope where none had been and redemption that his wife might be more than a memory.  He came with repentance over anger for her illness that had robbed them both of the final days she lived.  He came because of a collar and because he wanted someone to speak for God, no, to speak God's voice to him.  It was actually one of the highlights of my ministry (so far) and it has continually reminded me what being a Pastor is all about.  "Mom, there's Jesus!"  If I do it right, the little boys of this world and even the bitter old men will understand that where the collar is, there is Jesus.

Now if you feel you cannot but comment and condemn what I have written, go ahead.  But I think most all of us know what I am saying and what I am not when I tell these stories...
Posted by Pastor Peters at 6:00 AM

And the same should be said when people look at all Christians, including laymen, and say, "There's Jesus." For, all are the body of Christ, not just pastors. Great piece. Keep up the good work, pastor.

I've always wondered if wearing a reminder of whose I am would make me a "better" example. Good post. thank you. God Bless. See you there!

Pastor Peters, I think what you have written is most excellent. Would you consider submitting it to Forum Letter for print in one of their editions? It is worthy of a wider audience.

Thank you for what you have shared.