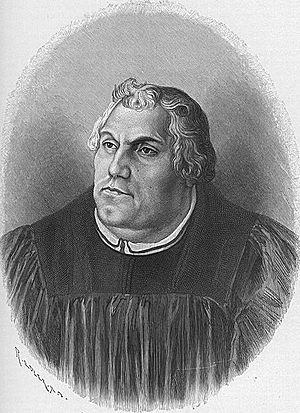 There are many who claim, more who do not understand him, many more who don't know who he is, some who believe it would have been better for Christianity if he had not been born, and others who believe him to be a Savior.  Somewhere in all of this is the truth -- a great deal more humble but no less profound.  It has been said the more words have been written about Luther than just about any other individual person.  It is certainly true that many of those words are not worth a whole lot.  Luther himself did not think so highly of many of his own writings.  But where would we be without him?

Try watching The Borgias on Showtime or Borgia: Faith and Fear series.  When Luther was born in 1483, this is what was going on in the papacy and this was the state of the church.  Given that these series are salacious by design and some of the story undoubtedly manufactured, history is not too kind about this period in Christianity.  A little Luther was not much in the face of such a state of affairs but he proved to more than a force to be reckoned with.  All in all I think even Rome thinks the issues Luther raised were legitimate and the state of the church scandalous.  Where would be now without him or those like him who called for reform and renewal built upon the Word of God?  I cannot bear to think it...  So here's to you Martin!
Posted by Pastor Peters at 6:00 AM

What if he had himself become pope due to some strange turn of events and had reformed the church from the top?

Rome still teaches viciously against him, some even claiming that he is the cause of all that is wrong in the world today. They see Luther as the original cause of the fracture in their iron grip on Western Christendom.