Talk about equipping your military chaplains...

We thought our parish was doing something when we purchased a mass kit and prepared to send a big box of devotional literature to one of our chaplains (a member being deployed).  I guess we do not supply our chaplains in the US military the way the Russians do...  see for your self... 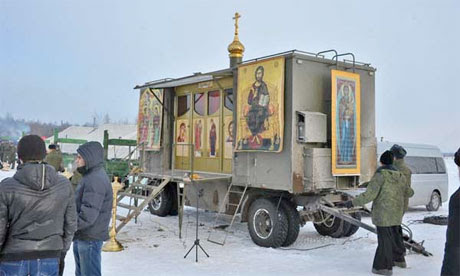 The Russian military unveiled an unlikely new weapon in its arsenal this month – an army of parachuting priests. The unit of chaplains, who have joined the Russian Airborne Force to train in parachute jumping and vehicle assembly, will operate out of flatpack churches that can be airlifted in to wherever soldiers may be stationed.
The church could be mistaken for a standard-issue army cabin, taking the form of a khaki-coloured shed on wheels, were it not for the cladding of gilded icons and the majestic onion dome spire sprouting from its rooftop. The mobile prayer room has also been fitted with a “life-sustaining module”, which includes a diesel power source, an air-conditioning unit and a fridge, reported Russia Today.
The chapel is flown in as a kit of parts, delivered via the kind of airborne platform usually used to carry armoured vehicles and other heavy military equipment, and is then assembled on the ground. Within, the gilded interior incorporates crucifixes, bells and icons, as well as a mini theatre – which can be extended sideways with additional wings, thus forming the cross-shaped plan of an Orthodox church.


HT to Gene Veith and the Guardian
Posted by Pastor Peters at 6:00 AM

It’s an interesting concept. What we are looking at is an altar behind three gates. The middle one, known as the King’s Gate (czar’s gate in Russian), may only be used by the celebrant. The two doors on both sides are for the use of other clergy, deacons and elders. In regular churches these doors are part of an iconostasis, which, as the name implies, is covered with icons. The lowest icon, just to the right of the King’s Gate is the one after which the church is named.

In this case, there is only one icon, and it is not between the King’s Gate and the one to the right. Presumably this altar is dedicated to the person in that icon. I cannot tell what it is but it appears to be an icon of Christ.

Wikipedia has this entry for a Roman Catholic “War Altar”: A war altar was a mobile altar on which Mass was celebrated before a battle. The ultimate example is the carroccio of the medieval Italian city states, which was a four-wheeled mobile shrine pulled by oxen and sporting a flagpole and a bell. The carroccio also served as the army standard.

An altar made according to canon law to accompany cannon is something unique. During WWI they carried “miraculous icons” into battle, but they did not perform very well.