At least the NY Times is supportive. . . 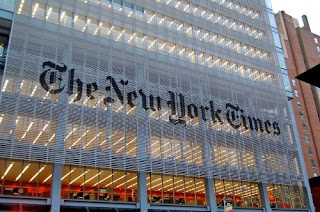 My own comments on the easy target the Presiding Bishop of the Episcopal Church notwithstanding, everyone agrees that Bishop Schori has taken quite a few hits, both deserved and those that came because, whatever happened, happened on her watch.  She has, however, at least one sympathetic supporter -- none other than the NY Times.  Read it all here. . .

What mystifies me, however, is how the NY Times and other liberal media can skip over the wasting of millions of dollars in lawyers, court costs, etc... ONLY to pursue buildings.  Liberal media always complain that the churches do not spend enough on people so how can they justify, excuse, or ignore the deep hole that a fading Episcopal Church has poured millions of dollars down with little to show for it?

In addition, I have been assured by those on various sides of the Episcopal theological divide that the Episcopal Church is not some stuffy church that worships a prayerbook, buildings, or old ceremonies.  Yet that is exactly the image that Bishop Schori's pursuit of buildings has fostered.  Her relentless seeking after buildings and punishing those who dissent enough to leave seems to imply that the things the Episcopal Church values most are buildings, heritage, and ritual.  The impression which Bishop Schori and her like have created for the Episcopal Church is that you can believe what you will (except orthodox Christian theology), you can take the Bible anyway you want (except factually), you can be anything you want (except those who foster a Biblical concept of marriage and family and heterosexuality), and you can do anything you want (except resist liberalism and leave with your facility).

My complaint about Missouri has been that inerrancy is the shibboleth that seems to determine whom we count as friend or foe.  We have not pursued with equal vigor the efficacy of that Word, its sacramental nature as that which delivers what it says.  My complaint about the ELCA is that diversity has become the shibboleth of their ecumenical choices, in which more is always better.  In the same way, cultural diversity and social advocacy are a part of that weakness.  My complaint with the NALC and LCMC (groups that broke with the ELCA) is that it seems to have been all about sex -- particularly the decisions of the 2009 CWA of the ELCA.  With the Episcopal Church,  the shibboleth seems to be traditionalism, ceremony, and facilities.  Everything is negotiable within the Episcopal Church except our commitment to claiming our past, putting on a good service, and keeping the building when folks leave us.  None of these characterizations is meant to be definitive but illustrative.  Missouri tends to say "Okay, you believe the Bible is without error so you are like us..."  ELCA seems to say "we do not need to agree on much of anything as long as we agree advocate for social change and you are like us..."  The NALC and LCMC seem to say "if you are like the ELCA prior to 2009, you are like us..."  The Episcopal Church seems to say, "if you like ceremony, appreciate history, are a social liberal, and like historic buildings, you are like us..."

As far as I know Missouri gets very little good press.  I am not sure anyone even knows about the NALC or LCMC.  But the grey lady and most of the media can always be counted upon to give a nod to a church liberal enough to tolerate those who do not believe much of anything and suspicious of those who believe in Scripture and tradition.