Who communes... what does it matter? 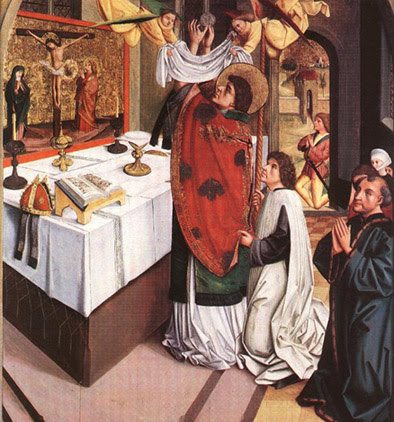 Both the wicked and the good
Eat of this celestial food,
But with ends how opposite.

Here is life and there is death
The same yet issuing to each
In a difference infinite.

Jesu, shepherd of the sheep
Thou thy flock in safety keep,
Living bread, thy life supply:
Strengthen us, or else we die,
Fill us with celestial grace.

Thou, who feedest us below:
Source of all we have or know:
Grant that with Thy Saints above,
Sitting at the feast of love,
We may see Thee face to face.
Amen. Alleluia.

Close(d) communion is often treated as if it were an invention, particularly among Lutherans of the Missouri Synod stripe.  While listening to a setting of Lauda Sion playing from Corpus Christi, I looked up the words to make sure.  Here St. Thomas Aquinas, about 1260 or so, writes of the every thing that close(d) communion is about.  Hardly about whether or not one is worthy of the Lord and His table, at least in the sense that this term means today, the concern of the Pastor is who receives this for their benefit and who receives the Supper for their condemnation, due either to ignorance/inability, unrepented sin, or lack of faith.

Rome also holds to close(d) communion, though with different terminology.  In fact I have read some things about the need for priests to preach about this.  Unworthy reception (unrepentant, ignorance of what the Sacrament is, lack of faith, failure to discern the Body of Christ, etc...) is not merely the lack of benefit from such eating and drinking but the potential for great harm to the one communing unworthily.  Pastors have the duty first to instruct in a general sort of way that the faithful ought not approach the Sacrament of Holy Communion if they are aware of serious (mortal) sin (what we Lutherans would call lacking repentance), or are in grave disunity with the teachings of the Church. It is usually helpful to instruct them based on the Scriptural admonition of St. Paul in First Corinthians 11:27-32.

The point being that those admitted to the Supper are not being judged better people than others but, given the boundaries of human frailty and judgment, they are those whom the Pastor knows to have been instructed, not to have unrepented sin, and are therefore prepared to receive to their benefit the communion on the body and blood of Christ.  Naturally, it was easier in days gone by.  We knew who would commune by knowing who had come to private confession prior to the Divine Service.  The waters became muddied not only with the advent of so many churches of so many confessions (even within a tradition, say Lutheran) but with the demise of private confession, its replacement with the general confession that precedes the communion only by minutes and not by hours or days, and the general mobility we take for granted today.

Indeed, we should all be held more accountable.  A perfunctory recitation of the general confession, even with its specific and pointed absolution, does not mean we have reflected upon our life, repented of our sin, made a good confession, and, absolved, intend with the aid of the Spirit to amend our sinful lives. Again, the Pastor is not the judge here but the one who is charged with making sure, to the best of his ability, that those who commune are well catechized, confess the true faith (think Nicene Creed), have repented of their sins, believe the Word of Absolution, desire by the aid of the Spirit to amend their sinful lives, and, of course, recognize the body of Christ in the bread and the blood of Christ in the wine according to Christ's own testament.  As difficult as this is for Pastors to fulfill for their own congregations and the people they know, it is a mine field of misunderstandings, offense, compromise, and lost integrity to administer for those whom we meet at the rail and do not know from Adam.  So it is hardly too much to ask folks to speak with the Pastor before the service.

Finally one last thing.  Pastoral discretion has more to do with the urgency of a situation in which exception is made.  Frankly, no one is in mortal danger of eternal condemnation because they do not commune on this Sunday or that.  So in the past the folks in the pews would not even think of asking of they knew they had not fully prepared and arrived early enough to speak with the Pastor.  Now folks show up after the service has begun, come to commune, and insist that if they are not communed (for whatever reason) the Church and the Pastor in that circumstance have committed the gravest offense.  Balderdash.  The real offense is not against the person who might not be welcomed at the rail but against the faith and the communion fellowship of the Church which is considered a virtual right owed to anyone and everyone who happens to be there.

I do make exceptions, too many for the taste of some in my church body, not enough for those of other church bodies.  But the whole thing might just disappear if vigorous private confession were practiced.  Then we could deal with this where it should be dealt with -- in the confessional instead of at the rail.  Nevertheless, I am often encouraged when I read such lines as these by St. Thomas Aquinas.  My practice, as well as my dilemma, is not new or exclusive to me.  It is the common affliction of the Church through the ages, except where those churches have chosen to embrace a novel practice inconsistent with their past.

I see people leaving as soon as they commune, also. I am not speaking of folk who have a plane to catch, either. There are some who regularly scoot out the back as if they're in a hurry to beat the Baptists to the restaurants. They don't stay for the final "Go in peace..."

That bothers me. If it is poor manners to "eat and run" what must our Lord think?