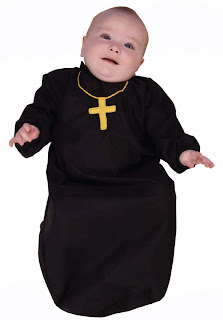 There was an interesting article on Catholic World News for 2nd May. The headline caught my eye: “Typical new priest: 32-year-old cradle Catholic who prays Rosary, takes part in Eucharistic adoration.” Reading down I saw this was a survey of 366 out of 497 men to be ordained in the US this year. The headline itself was uplifting: these are mature men who emerge from Catholic families and who are not embarrassed to take part in traditional devotions. Thank God for them.

There were other significant features to the survey: the overwhelming number (81%) has two Catholic parents; 20% have five or more siblings, 10% have four siblings and 22% have three siblings. 4% have been home-schooled – at a time when less than 2% of US children are educated at home. This – admittedly small – survey indicates that having two Catholic parents undoubtedly makes it easier to develop a vocation. Both Pope Benedict XVI and Pope Francis had Catholic fathers and mothers with a strong faith, who thus provided a balanced influence on their sons’ vocations. Again, larger families tend to produce more vocations than smaller ones. Perhaps this is because there are fewer material distractions in larger families, alongside greater opportunities for service? As it happens, I personally know of three priestly vocations from homeschooling families in the US. Again, such families tend to be large, counter-cultural and with a strong Catholic ethos.

A couple of notes on the above.  First of all, Roman Catholic priests tend to be older at ordination in part because the training is 1-2 years longer than the typical Lutheran seminary program (and Lutherans think that ours is too long).  I find it amazing that the Roman Catholics, where priests are in short supply right now, are adding a year to the training regimen for new priests, while Lutherans, who tend to have enough or more clergy are reducing the time and course requirements leading to ordination.

Second is the note that these men are mature -- that does not mean mature in the sense of old in years but mature in faith.  They have been raised in the faith, well catechized, nurtured at home and in the parish, and who have served as altar servers.  They know the faith and their church as men who have been raised within the faith and the parish sacramental life as familiar friend.  They have a piety which reflects this -- Eucharistic adoration, the rosary, etc...

Lutherans take note.  We are tempted to believe by some that maturity in faith means sincerity, that a "true" believer is the same as one who has been raised, catechized, served, and lives a piety reflective of our confessions.  We are tempted to believe that a quick path to ordination is necessary because seminary might take something away from the enthusiasm, energy, and "freshness" of the candidate and therefore they should be trained where they are and not at a residential seminary.  We are tempted to believe that the future of Lutherans lies with those who come in from the outside rather than from those who have been brought up in the faith, catechized in the faith, and live out the faith at a Lutheran altar.  We should take pause here... we might just be wrong.

I am not saying that Lutherans should mimic Rome.  I am not saying that Lutherans should merely look to another green pasture other than the evangelical, mainstream, non-denominational pasture some have been looking at.  I am saying that in our rush to repair our wounded church body, in our desire to see us grow and not bleed members, we are assuming things about seminary recruitment and education that may be at cross purposes with what we need and with the historical witness of the church over time.  Remember that even mighty student of the Word St. Paul went off for what, three years, to be catechized in the faith before he was sent forth to serve the church and the kingdom of God.

Pastors are not born.  They are made.  Not just as seminary, either.  But from the font, in the catechism, at the altar...  I think it is great that we have many men who love Jesus and want to serve Him... I am just not at all sure that this is the primary criteria we should use to ordain.
Posted by Pastor Peters at 6:00 AM

Pastor Peters wrote: "We are tempted to believe that a quick path to ordination is necessary because...."

Correction: "We are tempted to believe that a quick path to ordination is necessary because a traditional seminary education is not needed for district presidents to train pastors to adopt the Willow Creek and Saddleback way of doing church."

Conflict between the Pope and the bishops regarding clergy education and "how to do church" does not exist in the Roman Catholic church. Only in the dysfunctional LCMS is this the case.

Pastor Peters wrote: "We are tempted to believe that the future of Lutherans lies with those who come in from the outside rather than from those who have been brought up in the faith, catechized in the faith, and live out the faith at a Lutheran altar."

I do believe it. Ask any former Evangelical what attracted him or her to Lutheranism. They will tell you that it was the liturgy, the confessions, and the traditional divine service. Disaffected evangelicals want to run away from the shallow theology, the entertainment stage, and the obnoxious praise bands.

Sadly, many (most?) LCMS pastors think that worshiping and praying like evangelicals will attract evangelicals. Wrong.