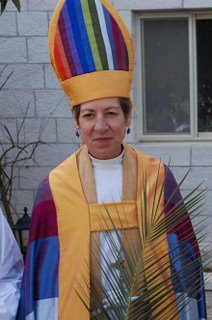 I have sort of given up picking on Presiding Bishop Schori.  She is too easy a target.  I have read several sermons by the PB.  Most of them would compete in a contest for worst sermon ever.  Now I write this as one who does not consider myself a great preacher, passing but not at all in league with some whose sermons I continue to read and relish (often with envy).  So I do not write this to prop up myself but I do find myself comforted by the fact that as bad as I may be, my people have never heard the likes of this.  BTW her taste in vestments well mirrors her theology!

From within the sermon:

"We live with the continuing tension between holier impulses that encourage us to see the image of God in all human beings and the reality that some of us choose not to see that glimpse of the divine, and instead use other people as means to an end.  We’re seeing something similar right now in the changing attitudes and laws about same-sex relationships, as many people come to recognize that different is not the same thing as wrong.  For many people, it can be difficult to see God at work in the world around us, particularly if God is doing something unexpected."

"There are some remarkable examples of that kind of blindness in the readings we heard this morning, and slavery is wrapped up in a lot of it.  Paul is annoyed at the slave girl who keeps pursuing him, telling the world that he and his companions are slaves of God.  She is quite right.  She’s telling the same truth Paul and others claim for themselves.  But Paul is annoyed, perhaps for being put in his place, and he responds by depriving her of her gift of spiritual awareness.  Paul can’t abide something he won’t see as beautiful or holy, so he tries to destroy it.  It gets him thrown in prison.  That’s pretty much where he’s put himself by his own refusal to recognize that she, too, shares in God’s nature, just as much as he does – maybe more so!    The amazing thing is that during that long night in jail he remembers that he might find God there – so he and his cellmates spend the night praying and singing hymns."

"An earthquake opens the doors and sets them free, and now Paul and his friends most definitely discern the presence of God.  The jailer doesn’t – he thinks his end is at hand.  This time, Paul remembers who he is and that all his neighbors are reflections of God, and he reaches out to his frightened captor.  This time Paul acts with compassion rather than annoyance, and as a result the company of Jesus’ friends expands to include a whole new household.  It makes me wonder what would have happened to that slave girl if Paul had seen the spirit of God in her."

"The reading from Revelation pushes us in the same direction, outward and away from our own self-righteousness, inviting us to look harder for God’s gift and presence all around us. Jesus says he’s looking for everybody, anyone who’s looking for good news, anybody who is thirsty. There are no obstacles or barriers – just come. God is at work everywhere, even if we can’t or won’t see it immediately."

It seems that Ms Schori wants to see the "spirit of God" (sic) in everything except the Word, which she quotes only to deride and she reads into it that which is not there in order to come to her own predisposed conclusion -- God is more in everyone and everything than in the means of grace...  Everyone and everything is good, beautiful, and holy in and of themselves without the need of repentance or redemption...  Compassion is the Gospel and the cross and empty tomb are but minor details in a story of love that accepts, tolerates, celebrates, and rejoices in all things except that which God has revealed to save us.

What is scary is that there are folks in the Episcopal Church (a once noble entity) who think that this is the real deal... which explains why the Episcopal Church is bleeding off people and parishes and those like it are becoming the irrelevant and insignificant mainline churches in America.

I spent a great deal of time in a small Episcopal parish in Winfield, Kansas, while a student at St. John's College there.  I enjoyed the music of the downtown parish in Fort Wayne, Indiana, where Darwin Leitz was organist and choir director so many years ago.  I spent several weeks altogether at St. Gregory's Priory in Three Rivers, Michigan.  I grieve for what the Episcopal Church and its leadership have become.  I fear it is way too late to redeem what the remnant of what is left and that the only solution is a mass exodus to a structure more friendly to orthodox Christianity.  It would be great if only a day would come when Ms Schori would wake up and find her whole church gone and she is left alone to her speculative theology informed more by a cultural social justice movement than Scripture and tradition.  It is one sad example of the fact that good liturgy cannot prevent apostasy (but the converse, that orthodoxy will seek worship consistent with its confession, remains the backbone of the real liturgical movement).
Posted by Pastor Peters at 6:00 AM

One hardly knows where to begin when encountering the bishop's complete upending of the Biblical account. The slave girl was afflicted with a demon, or if one wishes to interpret in medical terms, she was severely mentally ill. Paul's intervention cured her of her affliction, which the good bishop characterizes as 'her gift of spiritual awareness'.

Holy Cow, to quote Hary Cary! How does one get from that text to her conclusion?

She reminds me a bit of a visiting scholar I once encountered at an Oxbridge college. We were chatting, and I was informed that she was on a seminary faculty, and her goal was to destroy Christianity. The conversation that followed was, well, convoluted...