I covet all the prayers I can get... 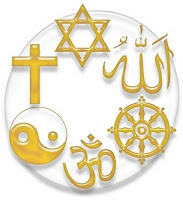 I had a fellow stop by the church for one reason or another.  I forget why.  Anyway, the guy turned to leave and said, "now you pray for me, brother.  I know God listens to you.  I ask everybody to pray for me.  You know who God will listen to.  So I covet all the prayers I can get from anyone and everyone.  Thanks, now..."

I know what he meant but I also know what he meant.  On the one hand his was a typical comment made often to all kinds of clergy -- suggesting they are closer to God than others and therefore have more sway with the Almighty...  But on the other hand, he was also saying it matters little which deity you pray to as long as the prayers get answered.  The more the better.  The more diverse the pray-ers the more likely the prayers will be answered -- as you like.

I get this all the time.  I am sure every Pastor does.  But it has taken on a new meaning.  With the diversity of religious expression now cultivated as well as found in America, the prayers and blessings of a breadth of people, religions, and deities are treated much the same way we might have welcomed the prayers of Christians of different denominations in the past.

So it took on new form when I read of a multi-faith baccalaureate service in which all the holy folk got up to raise their hands in blessing and impart the good wishes of a multiplicity of religions and gods upon those attending.  How could you go wrong with so many folks prayin for ya!  Indeed!!

The only problem with this is that any deity worth his or her salt would be offended by being treated as merely one of the cafeteria choices available.  The only problem with this is the God of Gods who has sent forth His Son refuses to be counted as merely one of many options and is a jealous and exclusive God who shows mercy inclusively through one Savior and who hears the prayers of His people.  When we multiply the prayers and blessings to and from a variety of deities, we end up diluting the meaning and power of the whole thing.  Faith is not a what if but a because.

Perhaps it is my fault.  Instead of merely smiling as people asked my prayers along with the prayers of every religious and religion they encounter, I should have confronted this honestly.  Perhaps we are not reaping our rewards for a tacit approval that presumed it to be a wholehearted endorsement of religious pluralism.  Now we are caught.  When we defer from such a kumbayah we sound arrogant, when we refuse to join the fun, we sound aloof, and when insist upon that which offers integrity to the Triune God, we sound exclusivistic.... all the while we are merely trying to be faithful...   Indeed!
Posted by Pastor Peters at 6:00 AM

Thou shalt have no other Gods before (or equal) to me.

I think that the Lord our God would take great offense at this. It would be best not to take part in such an event.