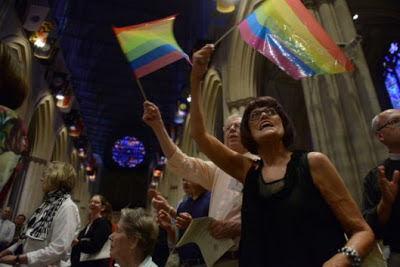 Advertised as “a service of thanksgiving celebrating an increase in compassion and equality,” the June 27 ceremony sought to place the Supreme Court rulings within the narrative of liberation struggles.

A congregation of approximately 300 clustered at the front of the Episcopal cathedral, still undergoing repairs from a 2011 earthquake. Chairs were arranged to face the procession. While the congregation was overwhelmingly middle-aged whites, songs were often African in origin, such as “Siyahamba” in which participants declared “we are marching in the light of God” accompanied by djembe drums. Several congregants enthusiastically waved rainbow flags emblazoned with the word “equality” as choir and clergy processed in to the Zimbabwean song “Uyai Mose” (Come, All You People).

What I do not get is why a GLBT would use African drums, rhythms, and songs to celebrate something which the African Christians largely eschew and disdain?  I thoroughly understand though do not agree with the desire to link up the civil rights movement with the GLBT "liberation."  What I find odd is that these folks would celebrate their seeming victory from SCOTUS to the sound of music drawn from one place where the GLBT movement has heard a pretty resounding "no" from the African churches.  Maybe they are convinced that the addiction to liberal cash will change the minds of these African Christians but so far they have not moved much from the solid front of opposition against the redefinition of marriage and the acceptance of the GLBT social agenda as a Christian goal.

1) It doesn't really matter what music and styles they used, it would come from a background that had a history of being anti-LGBT. (unless, of course, they celebrated with only Bette Midler and Barbra Streisand show tunes)

2) they do see a connection between themselves and the situation of the african-american community of the pre-civil rights era in the sense that both have been regarded as sub-human (no, I'm not talking about "marriage equality")

Imagine growing up hearing how disgusting you were from the time you were 9 or 10.

there are differences, of course. Prejudice against homosexuals has never included the overwhelming economic isolation african-americans were subjected to.

On the other hand, being dark skinned was pretty obvious and people would usually watch their language if someone from a minority group was obviously in ear shot. Gay kids are less obvious and had the misery of hearing parents, pastors and teachers ridicule "gays" in their presence. Also african-americans usually had a community in which they belonged. A gay kid usually grew up feeling absolutely alone, especially in the Church.

So the LGBT community uses the music because they are looking for a similar kind of freedom from self hate.

And, no, by the way, the Church does NOT offer a community of forgiven sinners in which a repentant homosexual kid can find fellowship. Frankly, being a celibate Christian homosexual is an absolute crappy experience I would not wish on a dog.

I stay because Christ offers forgiveness - the Church, however, does NOT!

So, believe me, I do understand how the LGBT community sees a similar search for human status in the music of the african-american culture.

Anony
LGBT folks are celebrating a sin. It's that simple.

I certainly do not have to repent and not desire to do it again, when I have sexual relations with my wife. This is NOT the case of the LGBT community. They are unrepentant in an activity God clearly says, repeatedly they and other unrepentant will not inherit the Kingdom of God.

Anonymus, I don't usually get into these type discussions. I come from an Art background. In high school, college, and thereafter I have had many friends part of the LGBT community.

As to the church offering forgiveness, are you speaking of the church or the Church? Which "flavor" church? Forgiveness is ours when we receive it from Christ; He died to win it for us. However, the Gospel Christ asked the apostles (and those thereafter) to preach is repentance and forgiveness of sins. The two go together. Both are gifts only Christ can give by the Holy Spirit.

If your own church doesn't offer forgiveness and you are repentant, then find one that does. You will likely suffer with temptations in this direction all your life. Heterosexual sinners suffer lifelong temptations, also. When I say "repentant" I don't mean you won't fall into it again; read St. Paul in Romans 7.

I think I can partially understand the feeling of disenfranchisement LGBT people feel. However, most everyone feels hated or left out some time in their life. Some unfortunately feel that lifelong.

We are talking about feelings. Feelings aren't ultimate. Feelings and experiences even when they're good aren't what rescues us. The Gospel is what has been done for us, 2000 years ago, not whether we feel human or accepted.

Why the talk about celibacy? Celibacy is a gift. It is not something to be defaced by people who understand not its spiritual benefits. People mistakenly say that they can't practice celibacy when, in reality, they're just slaves to biology. The Christian life, in its true practice, is meant to free us from that.

Celibacy, though, is best practiced in a community. If you try to do it without prayer, without a spiritual mentor and outside the confines of a monastery, one will most likely fail. I know of several homosexual men and heterosexual men who are living lives of repentance in a monastery under the careful guard of the abbot.

Celibacy may be a gift but chastity is the expectation of ALL those outside of marriage. Marriage is not a right, either. There is no promise that heterosexuals will find a spouse. There are many straights who desire marriage but have not found a spouse. We live in a sinful and broken world in which the ideal is compromised by the real. Gay or straight, no one is promised all the sex you want or need, a rich and blessed relationship with a "life partner", or a family that returns to you what you give it.

Celibacy may be a gift but chastity is the self-denial and self-control of ALL who are not now married.

Just a brief (sour) note from one not fully happy with the way his church body is going: the Wisconsin Synod's new Supplement (their lead-in to the next hymnal for WELS in 2024) has "Siyahamba" (We are Singing) as one of its new hymns that it highlights. Great...preview of coming attractions in WELS? One hopes not, but it's hard to ignore the evidence of one's eyes. Also, it comes off as pretty darn arrogant and imperialistic for white, middle/upper class people to co-opt someone else's songs and experience wholesale, and to assume that their urge to live free of God's Word is the same as the fight by African-Americans for basic human rights.