The problems of Christians in Islamic countries. . . 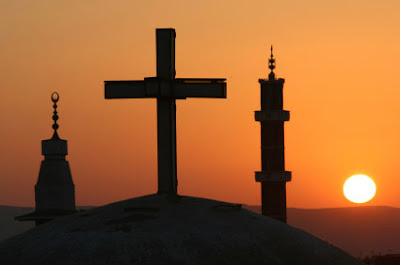 Though there are Islamic countries who tolerate the presence of Christians, one of the real problems for those Christians is finding a place to worship and being secure in that worship space.  Remember that all the Islamic nations of the Middle East had large and thriving population of Christians long before Islam began.  Some have tolerated those communities and even some church buildings but Christians in these nations are far more likely today than ever before to be without a worship home.

Some of those Christians are guests (workers who are there temporarily, business people and their families, and even members of the diplomatic community).  Most of them, however, belong to the long history and heritage of Christians who have called these nations home since the advent of Christianity itself.  Many of those nations have witnessed the Christian population decimated either as casualties of the wars and violence of the area or by the active or tacit approval of Islamic governments unfriendly to religious toleration and intent upon the persecution of non-Muslims.

The Roman Catholic Church faces the termination of its leased property in Kuwait in 2016, is looking for funds and approval to build a cathedral and building complex in Bahrain, but has found it difficult, if not impossible, to retain historic facilities and ministries within many other countries of the Middle East.

Perhaps they believe, as it appears some Americans do, that religious freedom means merely the liberty to believe privately and personally without the right to worship and the full exercise of that religious conviction within the public square.  In any case, this is a situation of abuse and a history of persecution that has not gotten its fair due in the media.  Perhaps religious discrimination can only be done by Christians and not to Christians -- at least according to the media.  In any case, this is a story Christians need to hear and we should all champion the rights of our persecuted brothers and sisters not only to the right of private belief but secure and the full exercise of worship and catechesis without fear and in every nation.  Period.

Should the Lord tarry, I believe another 50-200 years (depending on how fast Islam takes over Western civilization), there will likely be a reversal. Those persecuted will persevere and perpetuate as the Church seems to always have done. The Good Lord has always kept a remnant, and if it is His pleasure, the Church in the East will rise from it's ashes while the West languishes and lags behind as dhimmie.

"we should all champion the rights of our persecuted brothers and sisters not only to the right of private belief but secure and the full exercise of worship and catechesis without fear and in every nation."

Other than such sentiments being inluded in prayers to God, that statement, if it has any meaning, advocates action under the first use of the Law which will probably require the elimination of islamoregimes, including a significant number of islamists.

Here in the United States it would suggest the indictment, trial, and conviction for treason of a Muslim Brotherhood-supporting traitor in the White House.

Prayer? How many of the prayers of our churches, their pastors, and the people include petitions on behalf of these persecuted brethren?

If nothing more, can we do anything less than public advocacy and make sure that this does not drop off the news cycle? At least this and this is not a small thing.