Not necessarily a good thing. . . 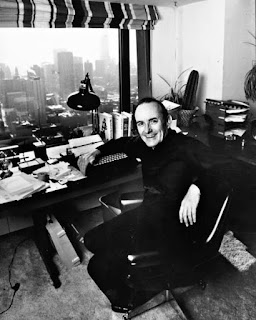 As you may have heard, author and sociologist Ft. Andrew Greeley died.  In one of the obits I read of him that he had few unpublished thoughts.  So far as I know, Greeley was not a blogger, did not tweet, but published books (granted they are available electronically as well as on paper).  But the barb still stings.  He had few unpublished thoughts.  By the way, that was not a compliment, either.  It was a tacit admission that perhaps he wrote too much.  If you have read his novels, you might wonder how a celibate priest could write such steamy sex scenes.  Perhaps it just goes to prove Jesus words about desire within being the greater problem than the sin without.  In any case I have spent a few weeks pondering on the criticism.  He had few unpublished thoughts.

Perhaps that is the great danger of our age.  We have few to no unpublished thoughts.  From the social media to the blogosphere to tweeting to texting, we leave little to the imagination.  We pass thoughts and pictures and videos on as if they were meaningless and that is often what they become.  When the medium becomes common, the thoughts expressed on the medium can also easily become common.

I write this only to suggest to you that it may be necessary for you, the readers of my blog, to tell me from time to time when to turn off the spigot.  Not every meandering thought in this pastoral mind is worthy of being shared.  I know that on an intellectual level.  In a practical way I try to prevent most of the chaff from being shared here.  But you know better than me and do no be afraid to tell me when it is enough or too much.

Confession is good for the soul so I must admit, contrary to the appearance of this blog, I do not blog every day.  I do not even blog every week.  Blogging is not my vocation; it is but a hobby.  I squirrel away some time now and then and binge blog -- from reading to writing.  I keep a notebook, affectionately called "my thought book" with me and jot things down for later use.  I program them to be published (well, not all of them, some are rather timely and are published in a timely manner).  If I died today, you would have a month or two of blog posts to ease the pain of your grief (or torment you, depending upon whether or not you like what you read here).

Anyway... I cannot forget that line from an obit...  he had few unpublished thoughts.  I hope it will not be said of me...
Posted by Pastor Peters at 6:00 AM

2. Your thoughts are not steamy, though some readers may get steamed.

3. The very fact you put thoughts into a book - you write them down first prevents blurting out thoughts. This is what is so unfortunate about the social media; publishing without thinking first. My paternal grandmother had a criticism of people who had this problem: "What comes up, comes out."

4. Considering the quality material generally published here, you probably have too few published thoughts. Lutheran pastors, of all people know how to keep things to themselves. A good thing for parishoners who confess privately; you could likely write some good posts and even books about that...