Aaaaaannnnnd... another one bites the dust. . . 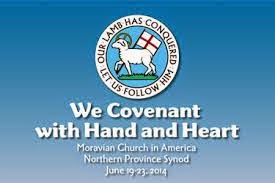 Okay, it is a pea sized denomination of some 50,000 members but it has followed the lead of those who listen to culture instead of the Lord and who value toeing the line of political correctness more than heeding the unchanging witness of Scripture and tradition... but... they bit from the poisoned fruit of the poisoned tree... so I will report on it.

The 2014 Synod of the Moravian Church, Northern Province has approved a proposal to allow the ordination of gay and lesbian individuals, whether single, married or in covenanted relationships.

By a vote of 181-62, synod delegates approved the proposal, which also includes provisions to revise the Book of Order of the Moravian Church Northern Province to reflect this change, and a call to create a rite for solemnizing covenanted relationships for use in the Northern Province.

The Synod is the highest judicatory of the Moravian Church Northern Province.

It’s amazing how similar the language is among gay advocates regardless of denomination. I’m sure (because I know the way Moravians think) that Dr. Miller thinks she is somehow being very “Moravian” in talking about “welcoming all people” and “acknowledging our differences” and “walking together in love.” In fact, she’s completely interchangeable with Gradye Parsons of the PCUSA, Katherine Jefforts-Schori of the Episcopal Church, Mark Hanson of the ELCA, or any other mainline leader.

Interesting their motto:    “in essentials, unity; in non-essentials, liberty; and in all things, love” . . .
Posted by Pastor Peters at 6:00 AM

The Moravian synod has poisoned itself with its vote of 181-82 to approve satanic perversion.