Another trophy is lost. . . 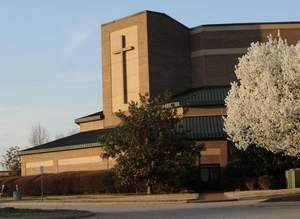 Two Rivers Baptist Church once sat directly across from the Opryland Hotel as if it were the religious mirror of the mega hotel's success.  Back in the day, thousands attended Two Rivers and its chief minister (Jerry Sutton) was considered a superstar among Baptist clergy and on the road to becoming president of the entire denomination.

The Southern Baptists have fallen on harder times.  They have dropped a million members, baptisms (their single common indicator of success) have dropped by 25% annually, and the whole denomination is suffering.  When scandal and conflict dropped the worshipers at Two Rivers to less than 25% of its former glory, a banner was draped across the once imposing sign calling the congregation now "The Fellowship at Two Rivers".  The new name did little to repair the damage done and the congregation decided it had too much building and the facility had to go.  For a couple of years it was on the market until the Roman Catholic Diocese of Nashville purchased the property for about $12M.  They got 220,000 square feet and 37.5 acres of prime and easily accessible real estate.  The Fellowship will vacate the property in June 2015, looking for humbler digs locally.  It is all reminiscent of the Crystal Cathedral's demise amid scandal and conflict and the Orange County Roman Catholic's purchase of that evangelical icon property for some $57M.

What is interesting is that the Roman Catholic Diocese of Nashville is one of the fastest growing in Roman Catholicism and, indeed, among all branches of Christianity.  In Nashville, home of the Grand Ole Opry and all things Southern, Rome is quietly and effectively picking up converts.  It makes sense for the Diocese to consolidate operations spread all over the city, to sell off some of its properties, and centralize.  It also is a strategic decision since the growth shows little sign of slowing down.  The building is mall like in appearance with little architectural detail to mark it as a church building so they will not need to change much to move in.

What is also interesting is that the Southern Baptists, the largest Protestant group in America since overtaking the Methodists around 1960, seem to have lost their focus. What began as a south of the Mason Dixon line group rode the wave of the post-World War II evangelical boom to become resident in all fifty states and the locomotive of American conservative Protestantism.  The train is losing steam, however. Led today by its first ever Black President, the Reverend Fred Luter, they are both the most ethnically diverse and multilingual denomination in the country.  But conflict and scandal and diversity have not fueled the kind of growth they counted on in the 1950s-1970s.  Last year they experienced the smallest number of baptisms since 1948 when Baptist president Harry Truman was President.  They are looking at what went wrong and trying to stop bleeding off people and start halting the decline... but who knows.  How many other icons of evangelical and fundamentalistic success may have a for sale sign out front?
Posted by Pastor Peters at 6:00 AM

It might be fair to note that a significant amount of Roman Catholic growth can be attributed to immigration.

it is also fair to note that the Mormons are more welcoming of God's gift of children.

Seriously, how can any group grow when it only welcomes members from the outside?

"Seriously, how can any group grow when it only welcomes members from the outside?"

I'm not aware of any group that only welcomes members from the outside.

Your nitpicking aside. Every church growth book on the shelf is about how to get more middle class tithing members butts in the pews. Exactly none of them are about how to get parishioners to have more kids. Perhaps the idea of preaching more children so repulses you that you feel you have to misdirect with nitpicking when you know exactly what I meant. Preachers are not preaching larger families. That is not in their financial interest. Larger families have less disposable income. They like more and more and more smaller families because those families can give more dollars.