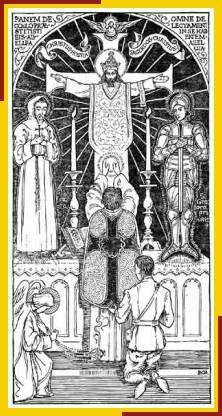 An account of Dom Gregory Dix and his liturgical legacy included the oft repeated charge that this author had devoted his whole career to "smuggling Roman Catholic ideas" into the Church of England.  Whether or not the charge is true of Dix, the charge is a commonly made accusation against Lutherans who reintroduce such things as chanting, Eucharistic vestments, incense, kneeling, bowing, genuflecting, and any of the fuller ceremonial pretty much lost to Lutherans since the 19th century (at least).

Often those Lutherans who reintroduce such practices are accused of "Roman fever" and it has not helped the cause when some of those who swam the Bosporus or Tiber were advocates of the fuller ceremonial and liturgical life Lutherans once enjoyed before their piety was hijacked by Pietism, Rationalism, and a resilient Protestant spirit.

I am not qualified to judge Dix or his legacy.  I cannot evaluate the whole of his work although I have learned much from his books on The Shape of the Liturgy and the little volume on tabernacles and reservation, to name but two.  Whether he was an "anglo-papist" as some charge or not is not a question for me but for others.  In this regard I defer to the well qualified opinion of Dr. William Tighe of Muhlenberg rather then the accusations of Bishop Colin Buchanan.  That said, those who have a personal preference against their own tradition's catholicity have a convenient and often effective charge to use against those who attempt to recover and restore such catholicity that is authentic to their confessional and liturgical identity.

When you cannot argue with your own Confession, you can always demean the integrity and practices of your opponents.  Such has been the way of Lutheranism for too long.  Confessional Pastors have for too long been told to accept egregious examples of parish practice that violates the specific word and the general spirit of the Lutheran Confessions.  They have for too long been made to feel that they are the problem instead of the very Protestant Lutheranism common to much of the last century.  They have been accused of "Romanizing tendencies" when they desire nothing more than simply to be Lutheran in theology AND in practice.  They have been told to go very slow because people will not understand (never mind that the missionals come in like gangbusters, ignore parish structures, by-pass constitution, and impose radical new forms of worship, piety, and outreach -- seemingly overnight -- and are lauded as those on the cutting edge of things who will save a moribund Lutheranism in irreversible decline.  Baloney.

If I wanted to be Roman Catholic, there is little that would stop me.  If I wanted to be Orthodox, there is little that would stop me.  The truth is that I am old enough and with enough experience under my belt and my position secure enough to the fact that I do not fear authentic, confessional, and catholic Lutheranism any longer.  I am not intimidated by those who impugn my motives or my integrity.  And I believe my parish work and congregation has proven that liturgical is not in opposition to vital, mission minded, and vibrant parish work in the Name of Jesus.

It might be easy to label the charge against a Dix or a Piepkorn or, dare I include myself here, a Peters who has"Romanizing" tendencies or having "Roman fever" or a "smuggler of Roman ideas" but the charge is patently false.  And it is for those who refuse to be content with Lutheranism Lite or a thinly veneered form of Evangelicalism that parades as Lutheran.  Now is not the time to fear or to live in fear of those who whisper their charges against you and the work you do.  Lutherans unite.
Posted by Pastor Peters at 6:00 AM

Dix isn't even a very good Romanist. He's into Religionsgeschicte. His understanding of the Lord's Supper clearly flies against FC VII and Apology XXIV.

The only book on Dix: